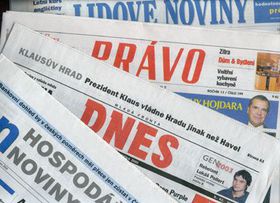 All the main dailies today lead with reports of heightening tensions between the government and the trade unions nation-wide over the planed fiscal reforms. On the international front, the papers carry shocking photos from the Indian port city of Bombay, which was hit by two huge bomb blasts.

Lidove Noviny devotes a lot of space to planned protests by trade unions deeply disturbed by the severity of planned government cutbacks. While teachers and some other state sector employees are going on strike for just one day, or even less, on September 1 to support their wage demands, influential industrial trade unions are threatening to call a general strike.

The unions are planning to bring as many as 20 thousand people to Prague on September 13 when the Parliament will be discussing details of the much needed fiscal reforms. Lidove Noviny quotes union leader Milan Stech who urges the Social-Democrat-led government to read its own manifesto carefully and to realise who its voters are. Prime Minister Vladmir Spidla, according to Lidove Noviny, sent a simple message to the unions: "You need the reforms, too".

Pravo reports that every tenth household defaults on its loans. Czechs have borrowed almost 200 billion crowns from banks and other financial institutions to buy goods they cannot afford to pay for straight away. However, the paper writes, the number of defaulters could rise dramatically should the economy slip into recession.

In such a case, Pravo continues, banks would be faced with losses amounting to tens of billions of crowns for which they would have to create additional provisions. This could eventually lead to an increase in interest rates. According to Pravo, people often overestimate their ability to repay loans, if they care at all, their sights set on a desired product. The paper quotes psychologists who attribute the problem partly to aggressive advertising which portrays credit as the simplest solution to fulfilling one's dreams.

The business daily Hospodarske Noviny writes that Czech firms could make a fortune by selling trams and trolleybuses on the American market. Many cities in the United States have been expanding their public transport networks due to growing problems with individual car transport.

Czechs already have a foothold in the market, the paper continues. Czech Inekon Group won contracts for tram supplies in the cities of Tacoma and Portland, beating such giant rivals as Siemens and Bombardier. New projects across the States are worth an estimated 58 billion USD. The only limiting factor for the Czechs is "Buy America", a regulation which stipulates that projects financed from federal funds must include 60 percent of American supplies and vehicles must be assembled in the States. Some Czech companies, Hospodarske Noviny writes, are therefore considering establishing joint-ventures with American firms or setting up subsidiaries.