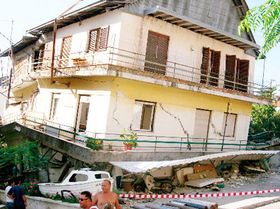 Greek earthquake, photo: CTK A new bout of illness for President Klaus makes the front pages today - "President Taken To Hospital" thunders MLADA FRONTA DNES, accompanied by a large colour photo of Mr Klaus kissing his wife. There's also a front-page photo of the presidential couple in PRAVO - there too the story is big news. Only LIDOVE NOVINY and HOSPODARSKE NOVINY take a more sober line - the former giving the story second place after the Greek earthquake, and the latter barely mentioning it.

So what's all the fuss about? Well, as MLADA FRONTA DNES informs readers today, President Klaus was admitted to Prague's General Teaching Hospital on Thursday evening, apparently suffering from dehydration. He began to feel weak after playing a game of tennis in Karlovy Vary - and was taken to a Prague hospital in his limousine. 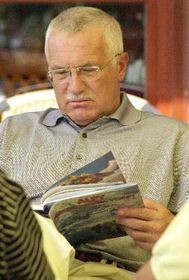 Vaclav Klaus in Karlovy Vary, photo: CTK The president, says MLADA FRONTA DNES, was staying at a Karlovy Vary spa resort where he was supposed to be convalescing after a serious dose of tonsillitis coupled with pains in his hips. On Thursday afternoon the president decided to play a game of tennis, but after the match complained of not feeling well. The president's spokesman said Mr Klaus had apparently overestimated his strength, but there was nothing seriously wrong with him.

But is dehydration all that ails the Czech president? asks PRAVO. The paper says there was speculation some time ago Mr Klaus might have leukaemia, something that was later ruled out by blood tests. The President's Office has also been keen to dismiss claims that he should have a hip replacement - absolutely not, his press secretary tells PRAVO. And according to the paper's online version - Novinky.cz - rumours that President Klaus suffered a heart attack in Karlovy Vary are not true.

Back to MLADA FRONTA DNES, and the planned expansion of Prague's Ruzyne Airport. 2005 will see the opening of a new terminal building, to help Ruzyne deal with an estimated 10 million passengers a year, as opposed to the present figure of 6.5 million passengers. When the new Terminal 2 North building is finished, there will be more shops, more restaurants and a new viewing terrace to watch the planes take off and land.

But more passengers means more flights, and more flights means more noise for the local residents. The mayor of Prague 6 Tomas Chalupa tells the paper that the airport might pay for special sound-proof windows to be installed in local houses. But noise is not the only problem, Mr Chalupa tells MLADA FRONTA DNES. More planes also means greater damage to the environment, such as local streams polluted by aircraft fuel. HOSPODARSKE NOVINY reports that this country boasts the highest average wage in the so-called Visegrad region - the Czech Republic, Poland, Hungary and Slovakia. Your average Czech takes home a monthly salary of 534 euros (before tax), ahead of Poland with 520 euros, Hungary with 507 euros and Slovakia with 341 euros. And if your average Czech was hungry, he could use his salary to buy 1,186 kilos of bread, or 7,570 eggs. Alternatively he could go to the hairdressers 317 times.

And finally today, Prague has a new street. As LIDOVE NOVINY reports, the new street is called Karolinska, and is named after Empress Karolina, wife of Austro-Hungarian Emperor Franz I. Karolinska street is located in the heart of Karlin, itself named after the late Empress. Karlin was devastated by last year's floods, and the new street is meant to commemorate the disaster.