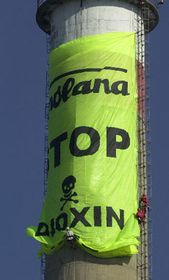 Greenpeace - STOP DIOXIN, photo: CTK The Pope praying for rain, a Greenpeace protest at a Czech chemical factory, and Czech soldiers on guard against angry mobs in Iraq - all feature prominently on today's front pages. MLADA FRONTA DNES has pictures of Czech troops standing near burning tires, the result of local Iraqi unrest on Sunday. In several incidents Czech soldiers received minor injuries from stones thrown by local inhabitants. Worse was an incident in which one Iraqi man - attempting to jump a vehicle leaving the Czech base - slipped under the wheels and later died from his injuries.

Turning to another unfortunate incident Czech-born actor Jan Triska was hospitalised over the weekend after suffering physical collapse. The 66-year-old actor, well-known for his physically demanding performance of King Lear at Prague Castle, was in hospital as part of regular rehab for a year-old back injury, when he suffered the physical break-down.

According to MLADA FRONTA DNES he was temporarily partially paralysed and doctors recommended he stay in hospital for at least a number of days. But, Mr Triska decided against their advice, intending not to miss another performance of Lear, even though an excruciating scene in the play requires the actor carry his on-stage daughter the full length of the podium.

Meanwhile, it has come to light that illness has once again plagued Vaclav Havel. The former president, who has a long history of suffering breathing illnesses, unbeknownst to most till now, suffered a serious bout of pneumonia. PRAVO writes that Mr Havel's wife Dagmar made the revelations just last weekend, saying her husband had suffered the illness fourteen days ago, and was still not completely well. PRAVO notes that interest in the former president's health remains high. Many Czechs, according to the daily, believe Mr Havel's problems still stem from an operation when he had half his lung taken to remove cancer in 1996. Last month the former president had a particularly busy schedule, travelling to the US to receive honours from George W Bush, then back to Prague to host the Rolling Stones.

"Want sex?"- that's how PRAVO starts one article this Monday looking at on-going problems with prostitution in the Czech Republic. The story maps how the Interior Ministry would like to take the sex trade off the streets and in-doors, where it could be carefully regulated and even taxed. The daily writes that yearly earnings in prostitution top some 6 billion crowns - none of which goes to the state, only to the prostitutes, their pimps, and illegal gangs.

According to PRAVO a new law, being put together by the ministry's special crimes branch, will be put forward by the Interior Ministry at the end of September. If implemented it could go a long way in separating - and ultimately protecting - women forced into the trade against their will.

According to the paper prostitutes would be required to register for a license, as well as go for regular check-ups. Still, some are not convinced the law will solve all problems: Hana Malinova - from a civic organisation known as Rozkos bez rizika, or Pleasure without Risk, points to the fact that many prostitutes are, for example, university graduates or even students who ply their trade on the sly - without the knowledge of their relatives, boyfriends, or spouses. In her view such prostitutes will continue selling themselves illegally - regardless of whether there is a new law or not.

Finally, LIDOVE NOVINY's comic strip Dlouhy Nos - drawn by well-known comic artist Stepan Mares - features visual commentary today on Arnold Schwarzenegger's decision to run for governor of California. The strip shows an overjoyed Plato in the heavens happy that an artist is once again running to head a state - ever since Mr Klaus replaced former playwright Vaclav Havel as president of the Czech Republic. But, according to Mares, artists are no longer what they were cut out to be. As an example of proof the Terminator cuts Plato down with a mini-gun, slurring the words "Hasta la vista, baby."