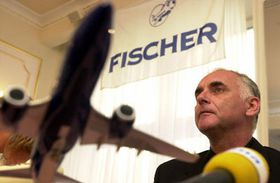 Vaclav Fischer, photo: CTK The ongoing saga surrounding the troubled Fischer travel empire dominates the front pages today - news that brokerage firm Atlantik Financial Markets will buy debts from one of Fischer's creditors means that Fischer lives on to fight another day. And also making headlines this morning - the Senate's blocking of three candidates for the Constitutional Court proposed by President Vaclav Klaus.

MLADA FRONTA DNES reports on the bribery allegations against Civic Democrat Senator Alexandr Novak. Police want to question Mr Novak in connection with the disappearance of forty three million crowns from the town of Chomutov in 1999, when Mr Novak was the town's mayor. The money was the commission from the sale of Chomutov's shares in local gas and electricity utilities. The money was meant to go into the town coffers, but police believe it ended up in Senator Novak's private bank account in Austria.

Senator Novak denies the allegations, but can't give a satisfactory explanation of just how 43 million crowns appeared in his private account, says MLADA FRONTA DNES. He claims he earned the money from his various business activities, but can't say who paid the cash into his account or why. Police have now asked the Senate to withdraw Mr Novak's parliamentary immunity so he can be prosecuted for abuse of office and accepting bribes.

Meanwhile in the wake of the death of a Czech mountaineer in Russia's Kamchatka peninsula, LIDOVE NOVINY looks at the safety of such expeditions. Mountaineering expert Vaclav Prucha tells the paper that the most frequent cause of death and injury during such trips is bad organisation. Unorganised expeditions - when climbing groups take to the mountains by themselves, without the help of a local guide or proper preparation - are the most likely to experience problems, says Mr Prucha.

He goes onto to tell LIDOVE NOVINY that the safest way of climbing is to hire a local mountaineering guide to accompany the group. But that's often expensive, and most unorganised groups wait at base camp for an organised group to set off and follow in their tracks. This is cheap and relatively safe, says Mr Prucha.

LIDOVE NOVINY also reports on the group of Czechs arrested in the town of Olomouc on Wednesday on suspicion of copying masterpieces by Rubens, Cezanne and Gauguin. The group - consisting of four men and a woman - are believed to have made up to 15 million crowns from selling the fake paintings.

And finally MLADA FRONTA DNES covers the on-going tussle between the Catholic Church and the President's Office over who owns the magnificent St Vitus Cathedral, located right in the middle of the Prague Castle complex. At present the cathedral is administered by the President's Office, but the Catholic Church says the building is rightfully theirs. However the 10-year dispute ends, says the paper, there's little chance that the doors to St Vitus will be closed to the public if the building is returned to the Church.