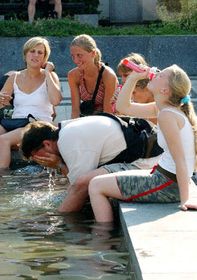 Prague, photo: CTK The sweltering weather across Europe continues to make headlines in all papers this Tuesday. Last-minute talks to save the failing Fischer travel agency, discussion on salaries in the public sector, and the ever-growing popularity of mobile phones are also the top stories today.

HOSPODARSKE NOVINY writes that farmers will suffer the most from the tropical weather conditions Europe is currently experiencing. The extreme heat will cause more damage than last year's devastating floods, the paper writes. It quotes the International Grain Council (IGC) as saying the weather is seriously harming grain yields in France, the Czech Republic, Slovakia, and Romania. The Czech Statistics Office confirms that harvests will fall by almost a third and some 15% less potatoes are expected to grow on Czech land.

While former senator and businessman Vaclav Fischer is in talks with creditors, hoping to save his businesses from collapse, his travel agency appears to be losing clients. Fischer travel agency's competition is already recording an increase in sales, writes LIDOVE NOVINY. Up to five percent more customers are interested in holiday packages offered by other agencies, and many flights that had empty seats last week are now fully booked. But the paper notes that it is only the bigger agencies that are enjoying profits. The smaller ones, on the other hand, are recording a drop in interest.

While Rolling Stones fans flocked to Prague's Letna plain last week, thousands of Christians have gathered there this week, MLADA FRONTA DNES reports. Tents and podiums have been put up to entertain some 7,000 members of the YMCA for a full week. Besides speeches and presentations from YMCA representation around Europe, its visitors can listen to concerts, watch theatre performances, do various sports, and all kinds of art work.

But LIDOVE NOVINY's Martin Zverina looks at the event more critically, and asks how the highly criticised CzechTek open-air techno party that was held for a week near the East Bohemian village of Kopidlna differed from the "strictly legal" YMCA gathering. From the point of view of those living in the surrounding buildings, there is no difference, he says. Both events bother residents with noise and in both cases, there was and is no one to complain to. The CzechTek organisers could only be reached after it was all over and the city council representatives responsible for controlling the YMCA event are unavailable until August 6.

PRAVO reports the head of the Czech Embassy's office in Bonn, Germany, has recently made a diplomatic faux-pas that is a major embarrassment to the Czech Foreign Ministry. Jaroslava Jeslinkova recently sent a letter to the foreign ministry in Berlin saying her name on the list of diplomats should be preceded with the title "Ambassador". The ministry replied by pointing out to her that the Czech Republic's only ambassador was called Boris Lazar and was based in the Czech Embassy's headquarters in Berlin.

According to MLADA FRONTA DNES, Mrs Jeslinkova's initiative was such a faux-pas that she has now been asked to apologise to Germany. The paper also points out that although Mrs Jeslinkova was previously the ambassador to Latvia and Lithuania, her current position in Germany only makes her a diplomat. Former ambassadors can only keep the honorary title when the Czech foreign ministry decides they can, the paper says, adding that this was not the case with Mrs Jeslinkova.

Imagine this. You come home after taking a walk in the countryside on a warm and relaxing Sunday afternoon. You take a shower and suddenly notice numerous black spots either crawling or just sitting all over your body. You take a closer look and realise they are big black ticks! What sounds like a terrible scene out of a horror movie actually happened to a woman last month. MLADA FRONTA DNES reports that Anezka Navrkalova from the town of Trebic came home with over fifty-five blood-thirsty ticks, after she decided to enjoy the shade of a tree for a few minutes.

The paper says that Mrs Navrkalova is now praying the ticks were not infected. This year, the number of cases of tick-borne encephalitis - a serious and sometimes fatal inflammation of the brain - are fifty percent higher than the average of the last five years. By the end of July, doctors had already recorded 209 cases. The average in five years for the same period is 143 cases. Mrs Navrkalova is now on sick leave and has been put on antibiotics. She has to wait until August 12 to get her blood tested for infection.