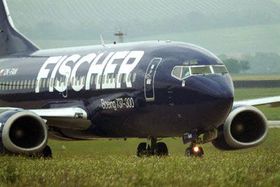 Fischer Air Boeing 737-300, photo: CTK The rise and fall of the prominent Czech businessman and former senator Vaclav Fischer fill the front pages of all the Czech dailies. "Fischer fighting for survival" and " More creditors clamour for their money" read some of the front page headlines.

Pravo notes that a strong investor is now Fischer's only hope, and the papers speculate on whom that might be. Last minute negotiations are said to be going on behind the scenes regarding the future of the biggest travel agency in the country.

Mlada Fronta Dnes claims that the largest European tour operator TUI, often mentioned as a potential suitor, is no longer interested, and that the British investment company Bancroft is exercising caution as well. Bancroft's spokeswoman allegedly told the paper that talks with Fischer had been discontinued for the time being.

Lidove Noviny has a front page headline claiming that the Czech Republic will trade in harmful emissions that pollute the environment. The paper reports that the Czech environment minister Libor Ambrozek has signed a contract with the World Bank under which the bank has pledged to pay the country four to seven million dollars for more than one million tonnes of emissions that the country saves in the coming decade.

The main condition is that the country will reduce the amount of emissions by at least 1,000 tons a year. According to the paper the money from the World Bank will go to state institutions and municipalities as well as private companies.

From the international scene - the papers report on the toughest sentence yet passed by the Hague-based U.N. War Crimes Tribunal - life imprisonment for a Serbian medical doctor found guilty of many counts of murder and terrorising hundreds of Bosnian Moslems and Croats in camps which were under his supervision.

There are also reports about the Vatican's condemnation of gay marriages as something "deviant". While Mlada Fronta Dnes and Pravo have featured this news without comment, Lidove Noviny says the Vatican has done itself a great disservice. This radical stand will not only antagonize homosexuals but a lot of tolerant believers of the Catholic faith as well, the paper says. Lidove Noviny expresses the view that in the present day and age the Church has other missions than to "poke its nose in people's private lives" as the paper puts it. 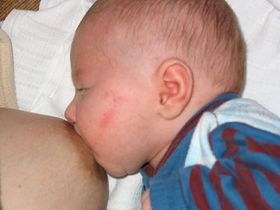 With the silly season - or "cucumber season" as it's called in Czech - in full swing there are plenty of sociological studies in today's papers, including a lengthy report in Mlada Fronta Dnes about the increasing number of Czech women who are saying no to marriage, preferring to remain single and bring up a child on their own. Sociologists say this stems from the fact that many young women today are financially independent and wish to retain their freedom.

Meanwhile, Lidove Noviny reports that infertility is a growing problem in this part of the world. A full 15% of Czech couples reportedly have fertility problems and there are sixteen clinics across the country which specialise in this field of medicine. Lifestyle is believed to be an important factor.