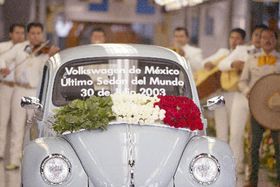 The very last Volkswagen Beetle, photo: CTK A variety of stories make the Czech dailies today including everything from Tomas Klvana's decision to leave his post as presidential spokesman to US President George Bush's alleged disinterest in meeting Czech President Vaclav Klaus. Featured in cover photos are a troubled Tony Blair - fighting for his political future in Mlada Fronta Dnes, and the very last Volkswagen Beetle - number 21, 529, 464. It rolls out in Lidove Noviny.

But, we start with Pravo and a rumour that the well-known Prague-based Fischer travel agency was in trouble swept the capital yesterday. Pravo writes that there was speculation that a Prague court had given bailiffs the go-ahead to seize property belonging to the agency in response to allegedly unpaid bills, with debts in one case - according to Pravo - amounting as high as 100 million crowns.

The travel agency's owner, former senator Vaclav Fischer, however, denied any such charges point blank, citing the fact that the agency's flights were going ahead as indication customers had no reason to fear. At this point ascertaining which side is right is a little difficult, since even the court that was supposed to have issued the right for bailiffs to act has denied any knowledge of the move.

By the end of 2006: that's the new deadline Defence Minister Miroslav Kostelka has set for abolishing the 12-month-long military service compulsory for young men in the Czech Republic. Kostelka's predecessor Jaroslav Tvrdik had planned for the full professionalisation of the Czech military to come two years earlier, something that is no longer possible he tells Pravo. The reasons, of course, are financial, so boys now in their mid-teens, who thought they would get by without having to do the national service, will just have to grin and bear it.

Asked about the role of the professional army in the coming years Mr Kostelka tells Pravo that the world is in some ways more dangerous than before, with the development of so-called 'asymmetrical threats': terrorism, mass migration, the possible use of WMDs. In his words: no one knows how the situation in the Middle East or even the Balkans may play out, making it apparent that even the Czech army is just as needed as ever. 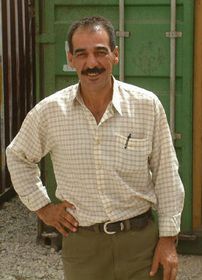 Muhammed Hasan Gafuri, photo: CTK Speaking of the military today's Lidove Noviny features an article about one man helping translate for Czech doctors in the military's field hospital in Basra, Iraq. He's Muhammed Hasan Gafuri the paper writes, offering a photo of a smiling middle-aged man who studied at a military academy in Brno more than twenty years ago. He tells the daily Brno was his second home.

Did he have any problems speaking Czech after such a long time? The Iraqi with the soft spot for Moravia said he was surprised he apparently still speaks so well. Speaking to the daily he says he would love to return to the Czech Republic some day. Having rediscovered his flair for Czech, however, he was dismayed to hear that the Czech field hospital will probably only continue its activities in Iraq until the end of the year.

And finally for this edition, Mlada Fronta Dnes features commentary today by respected British historian and political scientist Timothy Garton Ash - who has extensively covered Central and Eastern Europe. He gives Czechs his perspective on the current crisis faced by British Prime Minister Tony Blair over the war in Iraq. In Mr Ash's view, Britain has never had a better prime minister, and he makes it clear that he, for one, believes that Mr Blair acted in good faith. But, he suggests, if evidence of weapons of mass destruction in Iraq isn't uncovered soon the prime minister will lose his, and presumably many other peoples', trust.

Among the most interesting in Mr Ash's article is analysis of Mr Blair's recent speech in the US Congress. Tongue in cheek, Mr Ash likens some passages to Shakespeare, others to J.R.R. Tolkien: "In another part of the world shadow and darkness rule"; Timothy Garton Ash suggests that sounds like Mordor from 'Lord of the Rings'.