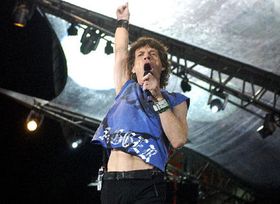 Mick Jagger in Prague, photo: CTK Today's papers belong to one person and one person only - the Rolling Stones' Mick Jagger. He's pictured on every front page performing on Prague's Letna Plain, where massive crowds came to see the Stones rock out on Sunday. Even the financial daily Hospodarske Noviny offers a tiny picture of the performer, though in lieu of a cover splash. That daily opts instead for a photo of veterans marking the 50th anniversary of the end of the Korean War. 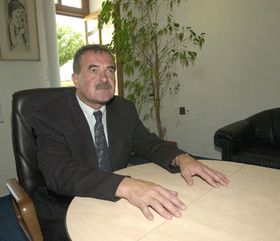 Vladimir Papez, photo: CTK And it is with Hospodarske Noviny that we continue: today the daily offers a brief interview with Vladimir Papez, the south Bohemian lawyer who recently withdrew his bid to become the country's next justice minister.

In the interview the daily asks whether there was any truth to a report published over the weekend by the tabloid Blesk, saying that in the past the lawyer had visited houses of ill repute in Ceske Budejovice. Mr Papez responds by admitting he did indeed visit the bordellos mentioned in the article, but only to visit clients he said he was representing. He denied that the Blesk article had any impact on his decision to withdraw his bid for the justice ministry post. But, he does complain that he felt an organised campaign had been led against him that could have continued had he not withdrawn.

Staying with politics the left-leaning paper Pravo features analysis of Mirek Topolanek's latest move to shake up the governing coalition. Recently Mr Topolanek revealed that his liberal-conservative Civic Democrats would likely call for a government confidence vote in the autumn. Earlier in the week he suggested his party would take no prisoners, saying they would do anything within their means to bring down the current government. Pravo commentator Lukas Bek examines reasons for Mr Topolanek's raising the stakes at a time when the Civic Democrats are benefiting rather well from being in the opposition.

According to the commentator Mr Toplanek's position as head of the Civic Democrats may not be as secure as he would like. Next year his party faces a new leadership convention and there is speculation that former party head and current president Vaclav Klaus may have other personal favourites for the post. But, is it a good idea for Mr Topolanek to try and pull down the government now? Pravo doesn't think so. The daily says the Civic Democrats have little more than a sketchy alternative to currently proposed fiscal reforms, suggesting they aren't ready to take over, to take the country through this difficult phase. Still, the daily admits, the temptation must be great for Mr Topolanek - his position would certainly grow in stature if he managed to lead his party back into government for the first time since 1998.

CzechTek techno party, photo: CTK It appears things are going from bad to worse for locals living near a week-long techno party taking place by a village in northern Moravia. Lidove Noviny notes that since the party kicked-off on Friday villagers have complained of being unable to sleep, watch TV, or even step out of their homes - in short do anything at all. Some estimates suggest as many as 40, 000 young people from all over Europe danced the weekend away at the site, Lidove Noviny writes

The daily reports that town leaders are worried the clean-up after the week will be atrocious Although they have been assured that organisers will be up to the task, they are regretting having learned about the techno party at the last minute - not being able to intervene. Even the farmer who rented organisers land for the party has his regrets. Lidove Noviny mentions his claim that he was misled. In his words, organisers said the concert would only be attended by some 800 visitors. And, how much did he get for his troubles? Apparently only 3,000 crowns - that's about 100 US dollars. 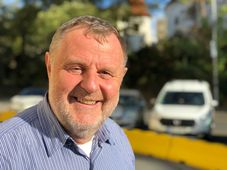 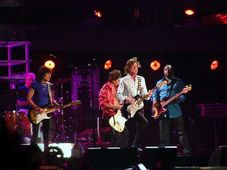 The Czech capital is in the grip of rock fever. The legendary Rolling Stones are back in Prague for a long-anticipated concert that…