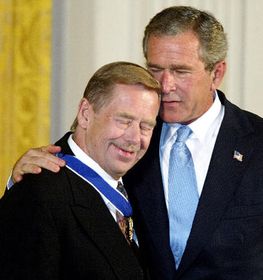 US President George W. Bush and former Czech President Vaclav Havel, photo: CTK And all of today's papers carry a photograph of US President George W. Bush giving a friendly hug to former Czech President Vaclav Havel, who was in Washington to accept the Presidential Medal of Freedom - the highest civilian award in the United States recognising exceptional meritorious service. In the domestic news, it is the threatened position of the Czech coalition government that makes the headlines.

PRAVO features an interview with Prime Minister and Social Democrat leader Vladimir Spidla. He says the government is stable, despite the paper pointing out that a party member had resigned from the Social Democrats' group in the Chamber of Deputies in protest at fiscal reform plans, possibly threatening the government's slim majority in parliament, and thereby the existence of the three- party coalition. Mr Spidla downplays this development, saying it was a plan that reacted to the current situation and would end up getting the support needed.

"Bus tragedy caused by bogus driver" writes MLADA FRONTA DNES, reporting on a shocking development in investigations of a fatal bus accident in the southern town of Ceske Budejovice in March. Nineteen people died and twenty-five were injured in an accident involving a driver who did not have the right to drive the vehicle. The paper says that the man had a license to drive buses but had not got the special permission required to drive tour buses. He had forged a taxi-license to make it look like it was also for tour buses. The police are now questioning the driver and his employer, who should have verified the license before allowing him to drive, the paper writes.

According to LIDOVE NOVINY even during the high season Czech tourists abroad could find themselves without arranged accommodation and a trip back home. Dozens of Czech travel agencies do not have an insurance policy and sixty of them will probably lose their licenses. According to the daily, the government is preparing a new law which will regulate their work, and therefore prevent further scandals with people abandoned on islands far away from home.

LIDOVE NOVINY also reports that Prague is becoming more similar to American and Western European cities in terms of the rising number of kids on the streets. The number of homeless children increases in the Czech capital during the summer, when institutions for children with special needs and children's homes are closed.

MLADA FRONTA DNES writes that Czech university students whom the savings bank, Ceska Sporitelna, promised a ten thousand crown reward each for outstanding report cards are planning to sue the bank for failing to keep its promise. The students, who are being supported by the Association for Consumer Protection, have launched a campaign to collect money to pay for a lawyer, the paper writes.

And finally, HOSPODARSKE NOVINY, reports that the Good Soldier Svejk has got a sculpture in the Polish town of Sanok. The reason for the recognition of one of the most famous Czech figures of all time in this little town is a very simple one - in one of the stories in Jaroslav Hasek's book, Svejk accompanied lieutenant Dub on his way out of the local brothel.