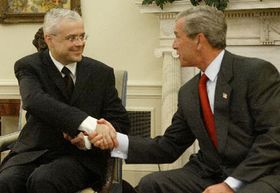 Vladimir Spidla and George Bush, photo: CTK A remarkable day for Czech diplomacy - that's probably the most accurate way of summing up this past Tuesday - and each of the Czech papers take due notice, offering photographs of a grinning Prime Minister Vladimir Spidla shaking hands with US President George W Bush. The headlines read "Spidla greeted at the White House" and "Bush supports Czech role in rebuilding of Iraq", while MLADA FRONTA DNES writes "Spidla meets Bush, Klaus Chirac" reflecting on the day's other important diplomatic event - President Vaclav Klaus' visit to France.

Ultimately, though, it is Mr Spidla's US visit that presents the greater diplomatic trump card offering prospects, at the very least, for Czech businesses hoping to take part in the reconstruction of Iraq. MLADA FRONTA DNES writes that on Tuesday Mr Bush pledged to put a word in for Czech companies interested in serious negotiations with US partners, granted contracts in the Middle Eastern country. The daily says that Czechs could play a role in several areas including the building of oil refineries, pipelines, roads, as well as providing geological research.

And, all the dailies take note of the friendly rapport between the Czech prime minister and Mr Bush. MLADA FRONTA DNES writes that the meeting between the two men lasted half an hour longer than previously expected, noting that Mr Bush even gave Mr Spidla a tour of the White House rose garden - apparently only reserved for special guests. 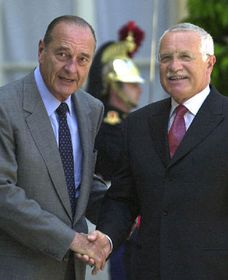 Jacques Chirac and Vaclav Klaus, photo: CTK Across the Atlantic President Klaus was Mr Chirac's guest in Paris on Tuesday, both men appearing for photographers after finishing lunch. PRAVO notes that the European Union was the subject for discussion, with Mr Klaus characteristically critical. In an interview for Le Figaro earlier in the day the Czech president said he "he wanted to be a citizen of the Czech state and didn't want an EU passport".

PRAVO also writes he made his EU scepticism quite clear to Mr Chirac, criticising the new constitution draft, as well as the tightening of national economies in one tight "shirt", that in his view has led to the slowing down of European Union countries' GDP growth. At the same time, the paper writes, Mr Klaus pledged the Czech Republic's "100 percent" reliability as a member.

Staying with PRAVO it appears that yet another Czech celebrity has gotten into trouble behind the wheel, after well-known French-born actress Chantal Poulain failed to yield right-of-way to another vehicle, crashing into the car. The 47-year-old actress suffered a minor concussion; however, the two people travelling in the other car, in their early twenties, were seriously injured.

One of them, a young woman, had to undergo a liver operation in order to stabilise her condition. Meanwhile, PRAVO writes that the round-about where the accident took place has been the site of many accidents in the past - 29 last year alone. The daily notes that if Ms Poulain is found guilty of negligence leading to grievous bodily harm, she could face up to five years in prison.

And finally, today's LIDOVE NOVINY describes how a bad tooth has caused a delay in the trial of Pavel Opocensky, a well-known Prague sculptor currently charged with sexually abusing a minor. Mr Opocensky's lawyer described on Tuesday that the toothache made it impossible for his client to survey court proceedings, so the judge adjourned the session till later. Mr Opocensky, meanwhile, has been remanded in custody. The sculptor has maintained his innocence in the case - claiming the 14-year-old girl he allegedly abused had called him but that he had not maintained any contact. Mr Opocensky's trial resumes at the end of July.