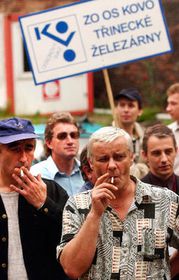 Steelworkers, photo: CTKQuestions about the whereabouts of Iraq's weapons of mass destruction, and the 50th anniversary of Edmund Hillary's historic conquering of Mount Everest are both topics on the front pages of the Czech papers today. MLADA FRONTA DNES and LIDOVE NOVINY feature the same photo of Hillary on their covers, quoting his appeal to the Nepalese government on Wednesday to stop issuing climbing permits to scale the fabled peak. In his view, the world's highest mountain now needs a rest from tourist ascents for at least a few years. Meanwhile on the home scene, things are looking downhill for steelworkers at the Trinec steelworks, some of whom demonstrated in Prague on Wednesday with placards expressing fear they would lose their jobs...

The European Commission issued a statement later in the day that the steelworks would not be added to a list of other Czech companies receiving European Union funding, much needed for re-structuralisation. Without such financial help, writes PRAVO, the plant's 6,000 employees could soon find themselves out of work.

That would mean quite a headache for the government, whose hands are tied in helping the plant. Under EU accession terms the government is not even capable of doing so, since it would render illegal the framework for EU funding for other steelworks in the country. On one bright note at least: PRAVO writes that union members have welcomed the government's decision to try and renegotiate terms. But, many analysts are already viewing it as a lost cause: on Wednesday European Commission representatives reiterated that accession terms agreed on in chapters closed last year, could not be renegotiated now.

Staying with PRAVO, the daily writes that the Czech Republic has drawn criticism from Amnesty International in its annual report for 2002. In the report Amnesty takes issue with how the country investigates alleged human rights violations by police. In the Czech Republic such investigations are overseen by the Interior Ministry, in other words, by the direct governing body for the Czech police. That, Amnesty suggests, leads to a conflict of interest.

Amnesty International says that often experts leading investigations fail to see them through properly, leading to an overall atmosphere in which some officers believe they can violate human rights without fear. That criticism has been denied outright by Interior Minister Stanislav Gross, who said on Wednesday that AI had got its facts wrong. Mr Gross said that police violations were no longer investigated by the Interior Ministry at all, but by other state representatives.

Organisers of a concert planned for June on Prague's Old Town Square, with the aim of showing support for the European Union just days before the referendum, are having to face the music. This week councillors at Prague's Town Hall decided not to allow the event. The reason writes MLADA FRONTA DNES: City Hall says the daytime concert would be too loud for local residents.

The decision, the paper suggests, is unusual. In the past holding concerts on the square were never really a problem, especially as part of commercial events or pre-election campaigns. Organisers are planning to appeal the decision. The planned concert was supposed to be opened by former President Vaclav Havel, and was supposed to feature music by Czech performers like Vladmir Misik and Jaroslav Hutka.