Václav Havel through the lens of Jiří Jírů

An exhibition called “Václav Havel through the lens of Jiří Jírů” has just opened at the Czech centre in Prague. It offers a selection of photographs of Václav Havel taken by his personal photographer during his first term in office as Czech president. At the exhibition I talked to Jiří Jírů about some of the photographs on display and how he had come to work for Vaclav Havel. 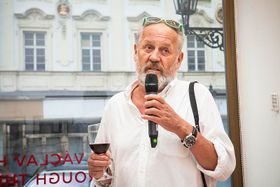 Jiří Jírů, photo: Anna Pleslová / Czech Centre in Prague “Throughout my career I did not like what is called covering “hot” news because there are too many photographers and it is a kind of a fight to get the best pictures and it is really not very pleasant. So I stopped working for all the agencies because that is what they do the most – hot news. It was always my dream to work in peace and so I somehow went to New York and in these days it was still possible to call someone without any references, just from the street, and it worked! And it was big magazines The New York Times, Business Week, Newsweek, Time, Fortune and so on. I called them from the street if I could have a meeting and they said OK, so come in a week’s time and sometimes I said I am due to leave town then and they said so come in three days. I doubt it would be possible these days without any friends. So I started to work on assignments and I was alone on the assignments most of the time which was very pleasant.”

“And then in 1993 when I found out that there was no photographer at Prague Castle, at the Office of the President, I took the same approach and asked some official there if they would consider me for the position. And I don’t know why –it must be some kind of destiny – they said, OK why not. We do not have much money, but if you would accept a very small salary –why not?”

What was it like to work for Václav Havel back then?

“Well, I got a contract and was soon sitting in a small office in this beautiful castle overlooking Prague. It took two months before I saw him close up and spent some time alone with him. There were always so many people around. I became a sort of photographic machine. But then it changed little by little. We got used to each other, but it was two years before we became a little bit closer. Nevertheless we were on first name terms. We used the Czech “ty”, the equivalent of the French “tu”. ” 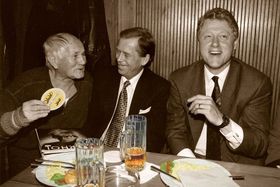 Bohumil Hrabal, Václav Havel, Bill Clinton, photo: Jiří Jírů You dogged his footsteps every day, went on foreign trips with him, to his country cottage…but he was a modest man –how did he take this invasion of his privacy? How did he react to the fact that he was always in the centre of attention?

“Well, it did not seem to me that he wanted to be alone. He liked to be surrounded by people who admired him, he felt it and it made him feel good. That’s for sure. ”

So he liked being in the centre of attention?

Did he ever give you ideas about what the photo should look like– where he should sit or against what background…did he have any input of his own or did he leave it all to you?

“Sometimes he wanted to see the results. I remember when he was hospitalized after undergoing lung surgery, he couldn’t talk, he could only write. I brought him the pictures that I took of him in the hospital because the Czech press and even the international press were waiting for these photos … I brought ten photos and he looked at them and said they are all good but make sure they don’t use the same picture in all the papers. So I was very surprised that he was actually “editing” his image.”

Over those seven years you must have taken thousands of photographs. This is a fairly small collection of about forty photos –how did you go about selecting them?

“I really do not now. I didn’t have any key – I just chose the pictures I liked the most. Actually, all these pictures have a story. Each picture has a story and very often it is a comical story.”

“Each picture has a story and very often it is a comical story.”

Well, can we take a turn around the exhibition and can you point out some of your favourite photographs?

“In this one we were in Kuwait in the Emir’s palace and when I saw him talking to the Emir I noticed that there was a huge painting of the Emir on the wall behind them. And the Emir was sitting underneath, in the same dress, wearing the same expression, just slightly younger in the painting, so I thought that was very funny and would make a good picture. And here the president is seen with a group of people roasting sausages at the official residence in Lány. They made a huge fire and the sausages were roasted at the end of a big stick held over the flames. But the fire was so big that nobody could approach it so the sticks are enormously long.”

Actually these photos are not typical documentary photos – they create the impression of being old black and white photos but there is always a splash of colour somewhere….can you explain the technique?

“Well, I used colour negatives. In those days there was no digital photography. So from the colour negatives I made black and white prints, which I toned a sepia colour in the bath and then I coloured little bits of the photo according to my choice, according to the composition in order to make it a bit like a painting. So it is something between a painting and a photograph. I call it photo-painting. And the colour that I add is based on the real colour photograph –so it is true colours.” 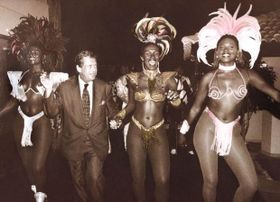 Photo: Jiří Jírů Did Vaclav Havel see these – or did he just see the original colour prints?

“He saw them as well because some of them were used for a book that came out fifteen years ago.”

“Well, we were in Brazil and they prepared a little spectacle for the president –girls dancing Samba. And they invited him to join them. And everybody was shocked that he really did get up and went on stage to dance the Samba with them! And it looked so funny because as you see they are almost naked and he is wearing a suit and tie. I found that very funny so I coloured the features the girls wore on their heads.”

We see a variety of world leaders here and there is a picture of Vaclav Havel with Pope John Paul...

“Actually, this photograph exists only because the Pope’s photographer felt sorry for me when I got lost in the maze of corridors in the Vatican. I was there and all of a sudden the president disappeared, nobody knew where and the Pope’s photographer took me by the hand and said follow me. So I followed him up some steps and through these labyrinths and he led me to this door, and he opened the door and there was the president sitting with the Pope in his very private office.”

And here he is with the Rolling Stones and Tina Turner as well. That must have been the Stones’ famous concert in Prague. ..

“Actually they were here twice and this is the second concert. I was not here for the first one. Tina Turner also performed in Prague and the president liked her very much so we went backstage to say hello and that’s when I took this picture.”

I saw one with President Clinton and Hillary Clinton somewhere I believe…..

“There is a funny picture of Hillary Clinton taken when she visited President Havel in his office and all of a sudden she noticed a picture of her husband who had come to visit the previous year. So here she is with Madeleine Albright laughing and looking at the picture of Bill Clinton. And this is a picture taken when Britain’s Queen Elisabeth was here. Of course she always wears a hat and I found it very funny that all the Czech women lined up to meet her all have hats which they never use. So I coloured those hats different colours.”

When you chose the photos – I am sure you chose a collection that would well reflect Vaclav Havel as you knew him and as people loved him… what kind of man do this pictures show? What qualities do they capture?

“Well, all of these pictures reflect his humanism because he was a humanist and you see it in all these different situations. Here he is playing with a puppet with Queen Beatrix of Holland. He was not what you would call a standard president, he was a president with a very big human accent and he was always up for any fun.”

“Václav Havel was walking alone in the woods, wearing a suit and tie, and I was quietly stalking him like a hunter. Then I saw two security men doing the same thing.”

And you can see that in many of these pictures – even though there is one here that shows him pensive, sitting on a riverbank alone. ..

“Yes, it is over there. When he was very tired from all these important political meetings he would need to be ….”

“Not only that but he would need to recharge. So he would recharge walking through the woods or sitting by the river alone. But the trouble is I wanted to take his picture so he couldn’t be alone. So he was in the woods, wearing a suit and tie and I was quietly stalking him like a hunter so that he wouldn’t see me. And then I saw two security men doing the same thing as I was. So he was actually never alone (laughs). So this was on the banks of the Vydra river in the Czech Republic and he was sitting on a stone watching the water passing by. And I took the picture. I don’t know if he saw me, but I have a big suspicion that he did and pretended not to.”

It shows a whole different side to him…

“Yes, it was difficult to get a picture of him alone because he was always surrounded by people, politicians, lobbyists, fans…”

You spent seven years close to him. What did those years give you?

“Well, I only see it as seven years of my life which I gave to this country. Of course it was enjoyable work and sometimes great fun, there was not too much competition…but as I age I see seven years of my life as a long period and I just hope that someone will enjoy looking at these pictures from time to time, that they will not end up somewhere in the basement.”

The exhibition on Prague’s Rytířská street is open until October 2nd. Next year it will be shown at selected Czech centres in Europe.