U Salvátora, the tiny Prague spice shop where time seems to have stood still

Hidden away on a narrow street in the Old Town, between Betlémské náměstí and the river, you will find a Prague institution. U Salvátora, a tiny kořenářství (spice shop), has been selling seasoning to the city’s residents for several decades. Indeed, entering the fragrant store feels very much like going back in time. 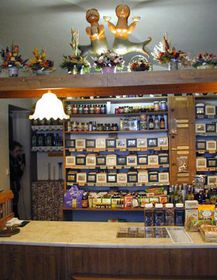 Behind the counter stands Jana Velebilová, a good-humoured, bespectacled old lady. A chemist by training, paní Velebilová has been working at U Salvátora for 30 years, and has owned the business since the fall of communism.

“Our shop has existed for 40 years. Last December we had our 40th anniversary. This is our second address. We used to be on the other side of the Vltava, on Mostecká St. In this painting here you can see our old building. It’s called U Salvátora, and that’s still the name of the shop to this day.

“The shop was set up by a co-operative called Druchema, which produced drugstore goods. The idea was that they would sell their own products there, and also sell spices that weren’t available elsewhere in Prague. But the focus changed, as their other goods were on sale all over the place and the spices could only be got here. In those days when the shop was really full we carried about 30 kinds of spices; today we have around 200.”

The large metal till at U Salvátora is the kind of contraption one would normally find in a museum, with a handle and keys similar to those on an old typewriter. 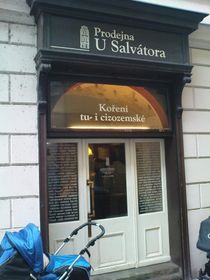 By the counter is a framed poster marking the kořenářství’s 40th anniversary, with copies of entries in its visitors’ book: among those who have written a few words of praise and gratitude to the little spice shop are the songwriter Karel Kryl, the actor Rudolf Hrušínský, and the current Czech president, Václav Klaus.

Above the entrance is a small arch where an intricate map of the world has been painted. At various points on the map are the numbers one to 12, while the oceans feature tiny model sailing ships, carrying spices to Bohemia from around the world. It is the work of artist Pavel Pecina.

“He conceived of it a bit like Michelangelo. He definitely lay on his back on ladders to do it. It’s very nice, and I’d say it’s one of the most photographed parts of this street. Especially at dusk, when the lights are on, it looks beautiful…Those numbers on the map correspond to the legend on the wall – it explains where particular spices were imported from by ship.”

The shop is cosy and charming. But it is the staff and stock that has kept this particular customer coming for years. 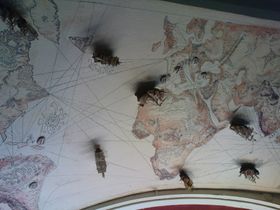 “The sales women here are helpful, nice ladies, and it’s simply become a habit for me. This is the best shop of its kind in Prague. I only shop here. Two years ago I moved away from Prague, but I always stop by when I’m in town.”

The spice store has a more or less constant flow of visitors, and Mrs Velebilová naturally tells me she can only talk when the shop is empty. During one such lull she describes the great pleasure it has given her getting to know steady customers over the years and even decades.

“Some are lovers of spices, some of course just love to cook so they love spices too. Many are random passers-by who are simply attracted into the shop by the aroma. I’ve now been behind the counter here for three decades, and I’m really pleased to now be educating a new generation. Children who went with their mums to the shop on Mostecká are now adults and they come here with their children. It’s really lovely!

“Every customer brings their story here with them. Some have been coming here many years, maybe 30 or 40 years, so I know them of course. They tell me how they’re doing. Or they haven’t been in ages, and I say, what have you been up to? They’re just ordinary people who like spices, and like eating well.” 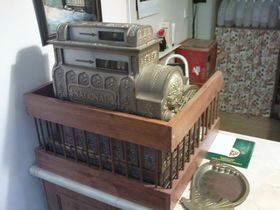 U Salvátora is reminiscent of an old-style grocer’s, in that almost all its wares are behind the counter. Indeed, some spices have to be brought out from a store in the back. The shopkeeper acts as go-between and advisor, involved in every sale in a way largely alien to the supermarket experience. Sometimes there is a language barrier to be overcome, as tourists stop by to pick up the goulash spices their guide books tell them are the best in Prague. But unsurprisingly the biggest sellers are local favourites.

“Czech cuisine of course, so marjoram, caraway seeds, things that are used a lot, paprika, pepper…Also what sells well are our mixes, which we’ve put together really nicely. Whenever we put out a new mix I’m always really pleased when I hear some customer saying, what you sold me last time was excellent – this time I’d like two bags, or five, or ten…”

As in other areas of life, tastes change, trends occur, and different goods are sought after, says the shop’s owner.

“Of course. It’s partly because people travel, they see the world, taste something new. They come back and say, in that country we tried such and such…Things catch on and these foreign spices spread. People know them, which I’m really pleased by. Like I say Czechs travel now, and they’re not afraid to try Italian, Indian or Chinese cuisine, which is beautiful.” 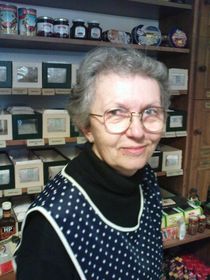 Jana Velebilová After even a short while at U Salvátora, the visitor will notice that the temperature is markedly lower than in a typical Czech store.

“This is a very old stone building, with stone walls that are two metres thick. That creates a kind of stone air conditioning. In both summer and winter it’s 17 degrees Celsius here. So the ideal temperature for spices, but it’s rather less good for me [laughs].”

While the temperature in the store is constant all year round, demand for various spices changes according to the season, says Jana Velebilová.

“Of course, it depends on the temperature. In spring people go outside again, they prepare for grilling. In the summer we sell the most spices for ‘quick meat’, as they call it. But as soon as autumn starts our customers start buying vanilla, cinnamon, cloves – people start getting ready for Christmas cooking.”

The shop is at Náprstkova 2 in Prague 1.