Five years ago the first “baby box” - a place where mothers can give up their unwanted babies anonymously for adoption, was opened in the Czech Republic. The event was preceded by a heated debate and it took some time before the advocates of baby boxes convinced the health ministry to give the project the green light. The very first baby box was opened in June 2005 in Prague’s district of Hloubětín; so far it has helped to save 14 babies. To this date, there are 36 baby boxes all over the Czech Republic and altogether 32 children have been left in them so far.

The country’s 37th baby box is just being installed at the town hall of Prague’s Dejvice district. It will only start operating after a 30-day trial run. The installation of the baby box, which most of all resembles a large microwave oven, was supervised by its manufacturer Michal Čumpelík, who told me how the system worked:

“The baby box has two doors – the outer ones are for mothers, or fathers, who want to give up their child, the inside ones are for doctors or in this case, town hall employees. The box is permanently heated and air-conditioned and there is a stable temperature of around 30 degrees Celsius. If a child is put in a baby box and the doors are shut, the alarm instantly alerts someone, who calls an ambulance, or if it is in a hospital, a paediatrician.”

The baby box is of course not the only option a mother has when she decides to give up her child. She can either give birth anonymously or place her child in a children’s home. Ludvík Hess from the Statim foundation for abandoned children and the founder of the baby box project in the Czech Republic says a baby box has certain advantages over the other options:

“There are many women who don’t want to deal with social workers, and I don’t blame them, because the communication isn’t always pleasant and easy. So there is definitely a large group of mothers who are ashamed and don’t want to get in contact with anyone. It can also be mothers who are here illegally, for example for work, and they cannot ask for an anonymous birth. Moreover, anonymous births are not intended for every woman.”

On the other hand, it is precisely the anonymity of baby boxes that has been criticized from the very beginning. The idea behind a baby box is that a child without an identity can be placed in a new family almost immediately, but that also means that his or her right to knowing who its parents are would never be fulfilled. Opponents of baby boxes, such as paediatrician František Schneiberg, argue that it breeches the Convention on the Rights of the Child:

“There are other options of how to give a child away in a more dignified way, such as anonymous birth. This option is always better for the child, because we know its medical history. In my opinion baby boxes support parents in acting irresponsibly and make it easier for them to get rid of their child. Also the mother doesn’t have a chance to reverse her decision. We know from experience that when she gives birth secretly in a hospital, she often changes her mind.” Advocates of baby boxes say that mothers who intend to abandon their children because of a personal crisis will do so anyway and a baby box can save babies from dying out in the cold or being killed at birth. Paediatrician František Schneiberg disagrees, referring to statistical data:

“A mother who kills a child does so in a moment of madness, in distress. But a mother who wants to put her child in a baby box has to act rationally. She gives birth, wraps up the child, and gets to the baby box. We already know that in Germany baby boxes had no effect in this respect. Here it is usually two to four children a year who are found dead and the number remains more or less the same.”

So what exactly happens when a child is found in a baby box? After a thorough medical check up, doctors get into contact with social workers, who immediately start looking for an adoptive family. The final decision is made by court. Ludvík Hess again:

“The court can place the child in a children’s home but most of the infants are put up for adoption within just a few days. After a trial period, which usually lasts three months, the court makes a final decision, which is irreversible. So the biological mother has at least three months to change her mind. We had a baby girl in Ústí nad Orlicí who must have been placed in the box immediately after she was born with the placenta still attached to her body. Four days later, she had a new family.” 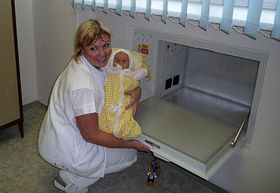 In reality the process is not always as smooth and anonymous as in this case. The very first child was left in a baby box with a birth certificate. Little Soňa was born to a single mother who decided she couldn't handle the financial burden of having twins. However, she put her daughter in the box with a birth certificate. Her case evoked so much public sympathy that within weeks she was back home.

In a few cases, it was the mothers who changed their mind and claimed their children back. But probably the most unusual case happened just recently, when a two-months-old baby boy ended up in a baby box after his father decided he was incapable of taking care oh him. The mother has claimed her child back but it may take some time before her request is granted – in such cases, social workers have to investigate in what kind of environment the child lives and whether it may not be at risk of child abuse.

Despite the controversy which still surrounds baby boxes in the Czech Republic and despite the fact that they are sometimes misused by irresponsible parents, their founder Ludvík Hess doesn’t question their overall benefit: Baby boxes in the Czech Republic “Of course I don’t believe that all of the 32 children that have been left in baby boxes since they were set up would have ended badly, that they would have been dumped in the cold for example. But even if we saved just one life, our effort has been worthwhile.” 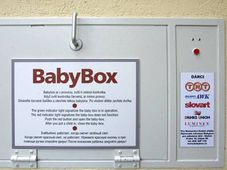 Today in Mailbox: baby-boxes in the Czech Republic, the status of Kosovo, response to One on One and the Sunday Music Show. Listeners… The Czech Republic has once again come under fire for failing to adequately protect child rights. In its latest report the UN Committee…