President Miloš Zeman tells Radio Prague: I am an advocate of the Czech Republic

Czech President Miloš Zeman is one of the few European leaders who accepted the invitation to attend victory celebrations in Moscow marking the 70th anniversary of the end of WWII. The decision stirred widespread controversy in the Czech Republic and the government postponed its decision on whether to finance the trip until the president’s office announced that he would not be attending the military parade on Red Square. In an exclusive half-hour interview for Radio Prague’s Russian service the president explained why he would not be attending the parade. 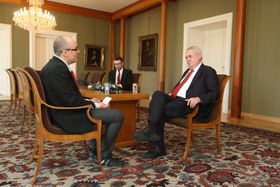 Kirill Shchelkov, Miloš Zeman, photo: archive of the President's office “I am going to Moscow in order to show my respects to the dead, not to the living. I am paying my respects to the 20 million Russians – among them Russian soldiers – who were killed in WWII. That is the aim of my visit and that is all there is to it.”

The Czech president’s views on the crisis in Ukraine which has strained relations between the Western world and Russia, have been widely reported. The head of state maintains that what is happening in the country is a civil war. He has strongly opposed sanctions against Russia arguing that they are not helping the situation and are damaging both Russia and the EU member states. Asked about his stand on Ukraine Mr. Zeman said:

“As regards Ukraine I am for the fulfillment of the Minsk agreement including the decentralization of Ukraine, which is part of the agreement, as is the condition that Ukraine should retain full control over its eastern border with Russia. I hope that adherence to the Minsk peace deal will lead to the end of what I call the civil war in Ukraine, because it is a civil war. If you look back at the Spanish civil war you will see that there was intervention from Germany and Italy on the one hand and the Soviet Union and possibly France on the other, but either way it was a civil war. Those who do not read the situation in Ukraine as a civil war are simply mistaken. I want to see peace return to the country and in my opinion the territorial integrity of Ukraine can be maintained through decentralization.”

"In the Czech Republic we perceive Russia in conflicting ways:on the one hand as a liberator, on the other hand as an invader"

Attitudes to Russia in the states of the former communist bloc differ –not just from one political representation to another, but from person to person and are often an issue of heated controversy. President Zeman gave Radio Prague his take on what is behind these differences.

“In the Czech Republic we perceive Russia in conflicting ways: on the one hand as a nation which together with the US liberated us from Nazi occupation in 1945 and on the other hand as an invader back in 1968. This is what causes the discrepancy in public opinion. Older people tend to emphasize what they experienced in 1945, middle-aged people have strong memories of the 1968 Soviet-led invasion of Czechoslovakia and young people are generally not very informed about history. As regards Poland, in the 1920s there was the Miracle at the Vistula River and in 1944 the Red Army remained inactive during the failed Warsaw uprising stopping outside Warsaw. In Hungary we have a pragmatic leadership led by Viktor Orban. They do not bring up the Hungarian Uprising of 1956 a great deal. We have a duty to try to comprehend history. Not to forget history and to comprehend it. It is a different interpretation of history that creates different views of Russia. ” 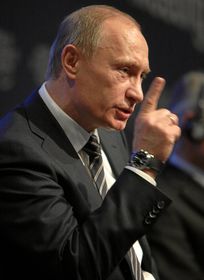 Vladimir Putin, photo: archive of World Economic Forum, CC BY-SA 2.0 Late last year the Washington Post published a scathing editorial slamming Czech President Miloš Zeman and Hungary's Prime Minister Viktor Orban for what the paper called their pro-Russian statements in the face of EU sanctions and the crisis in Ukraine. The editorial described the Czech president as a "virtual mouthpiece for Russian President Vladimir Putin". So having been labeled an agent for the Kremlin - how does the Czech president see his role?

“I am an advocate of the Czech Republic. I am not only called an agent of the Kremlin but an agent of China, because I made a trip to China in order to help develop mutually advantageous bilateral relations. The same goes for the Russian Federation. I do not support the sanctions against Russia –look at what happened in Cuba. Sanctions are being lifted after 50 years, that’s how long it took. I am in favor of nurturing contacts -people to people contacts, business contacts, student exchanges, tourism and so on. Cuba is ample proof of the fact that isolation does not help anything.”

Despite the increasingly strained relations between Russia and the Western world and the fact that many observers describe the situation as a return of the Cold War, Czech President Miloš Zeman has a vision of close cooperation in the future.

"They call me an agent of the Kremlin and China. In reality I am an advocate of the Czech Republic"

“I have a dream. A dream that I have harboured for years. In the long-term future- to see Russia a member of the European Union. The EU and Russia are complementary economies –on the one hand you have bountiful natural resources on the other cutting edge technology. Each side needs the other. It is necessary to fuse these assets and create an economy that will be beneficial to all member states of such an alliance and will enable each of them to grow.”

Mr. Zeman’s other dream –which he emphasized in the interview –is to see the international community actively cooperate against international terrorism which he perceives as one of the main threats of the present day. President Zeman has been one of the most vocal advocates of a united front against the Islamic State. He maintains that he is not anti-Arab, as some have suggested, but against Islamic radicalism.

“I recently visited the United Arab Emirates and Jordan and we had fruitful talks, not just political, but business oriented. There was a bilateral business forum. These two countries are putting up a valiant fight against the Islamic State. They are on our side in this conflict.” 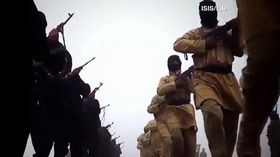 Photo: Czech Television Finally Radio Prague asked the president to comment on a report released by the Czech intelligence services according to which there is an unprecedentedly high number of Russian and Chinese spies operating on the territory of the Czech Republic.

“I am not fully informed about the number of agents from different states operating on Czech territory. But I think it is to be expected that especially the big states have agents in all the countries were they have economic or technological interests. That is perfectly normal. As it is for the intelligence services to closely monitor their presence, in order to justify their existence.”