A painting depicting the most famous fratricide in Czech history – the murder of prince Vaclav by his own brother Boleslav in 935 has emerged to see the light of day after gathering dust in an attic for close to 170 years. In this edition of Panorama we look at why the monumental work spent so many decades hidden from the eyes of the world. 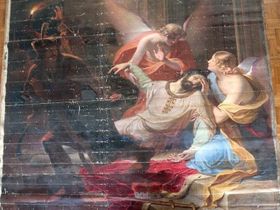 The painting of the murder of Vaclav by his own brother was commissioned by the Catholic Church in the first half of the 19th century and the artist chosen for the task was the acclaimed Viennese painter Anton Petter. Petter spent six years of his life on the monumental work producing a painting more than 8x 5 meters in size. When he proudly unveiled it for church dignitaries to admire in 1844 his work of art met with shock and condemnation. Art historian Hana Šustková explains:

“The painter Anton Petter was often commissioned to do paintings for the Olomouc Archbishopric and since he had an excellent reputation he was given a free reign on how he would approach the subject matter. But when the then-archbishop of Olomouc Maxmillian Somerau Beckh saw the work he was shocked and horrified. It is true that the composition was somewhat revolutionary for the time. The dominant figure at the forefront of the painting was Boleslav – the aggressor – rather than Vaclav the victim as the Church had envisioned. The archbishop tried to persuade the painter to redo the work and Petter agreed to change some details but the key elements could not be altered.”

Prince Vaclav received a halloo as the Church commanded and several other details were added but Boleslav who murdered his brother remained the dominant figure in the painting which was not the message the church wished the work of art to convey. The second viewing of Petter’s work was as unsatisfactory as the first. 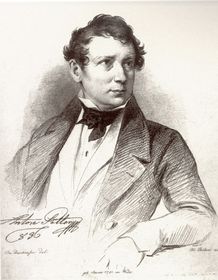 Anton Petter The painting was off to a bad start and there was worse to come. It was finished shortly before an exhibition of contemporary art opened in Vienna and the archbishop was asked to contribute a piece. He promptly sent off Peter’s latest work to see how it would be received by the broad public. The outcome was a disaster and the painting’s first public appearance at the Vienna exhibition proved to be the kiss of death. The exhibition halls were not designed for monumental paintings and as a result it could not be shown whole, it was folded and, in the end, less than half of it was exhibited. Moreover there was the problem of admiring a painting of that size from close-up. The public was not impressed and Petter’s work got very negative reviews. The archbishop heard about its negative reception and apparently that sealed the painting’s fate.” Hana Šustková again:

“Nobody really stopped to think about why the painting got bad reviews. In those days the Catholic Church commissioned a huge amount of art work and was used to getting the very best. For the archbishopric to display a painting that was considered second-rate –moreover to display it in a cathedral – was completely out of the question.”

The work was to have been an alter painting for the Cathedral of St. Vaclav in Olomouc but it never graced the church’s interior nor was it displayed anywhere else. The archbishop ordered it to be hidden from sight and eventually it ended up in the attic of Kromeriz chateau which for years served as the summer residence of the archbishops of Olomouc. There it gathered dust for 167 long years before it was uncovered last spring. An inspection of the painting revealed extensive damage – it had been folded several times over and had later been rolled up in an inexpert manner and dumped unceremoniously on the floor of the attic where it not only gathered dust but was damaged by water that most likely leaked through the attic roof. News of the find quickly spread and the Archbishop of Olomouc together with the Museum of Olomouc and the Vítkovice Steelworks, established by one of the Olomouc archbishops, launched a campaign to save the work. The steelworks provided the money for the painting’s initial restoration enabling it to be shown to the public on the occasion of St. Wenceslas Day, a public holiday in honour of the Czech nation’s patron saint, on September 28th. It was displayed at the multi-functional gallery Gong belonging to the Vitkovice Steelworks – the only place large enough to house such a painting in Olomouc – and was finally shown off to its best advantage in an appropriate setting. Hana Šustková explains why the company has shown a vested interest in the fate of this particular work of art. 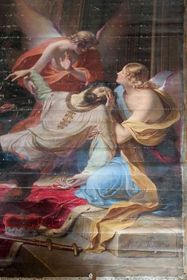 The Archbishopric has launched a fundraiser campaign to get the art-loving public to contribute to the second phase of restoration which needs to go much deeper and will be much costlier if the painting is to be preserved for future generations. Since its unveiling on St. Wenceslas Day September 28th people have already donated several hundred thousand crowns to help save the painting and may continue to do so until September 28th of next year when restoration work is expected to begin.

The Archbishop of Olomouc Jan Graubner who is actively involved in saving the work of art refuses to be critical of his predecessor’s decision to bury it.

“From my view point this is not a huge loss, no irreparable damage has been done. We will save the painting and when it is restored to its former glory it will grace some other church than the one it was originally meant for.”

Although there is no direct proof of why the painting got the treatment it did art historians agree that the main reason would have been in the composition of the work and no matter how good a painting may have been the Church was not prepared to sacrifice ideology for art. The director of the Olomouc Museum Pavel Zatloukal says the manner in which Boleslav was portrayed was at the centre of the problem. 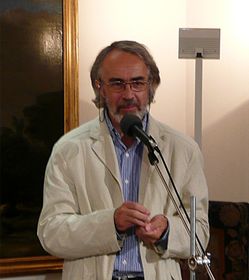 Pavel Zatloukal, photo: Jan Jeništa, CC 3.0 license “The Olomouc archbishop felt very strongly about the fact that the fratricidal killer Boleslav was too dominant in the picture when in the eyes of the Church the main emphasis should have been on St. Vaclav.”

Whatever Peter intended his revolutionary approach to a frequently depicted scene in Czech history failed to pay off. At least not back in 1844. But what was seen as outrageous then is seen as a sign of the painter’s originality now. The biggest painting ever done of St. Vaclav has aroused enormous public interest and enthusiasm. Art historian Ivo Hlobil says the painting is ripe for rehabilitation but putting it into the context of Anton Peter’s overall work is a process that will take time and will require close cooperation with Austrian art historians. So what impression did the controversial painting make on art historian Hana Šustková?

“The first thing that struck me was the composition of the work which for its time – and moreover for a piece of work commissioned by the Church – is truly unusual. And then of course the motif itself makes you stop and look at the painting closer than you would if you did not know it was a fratricide murder. There is something deeply compelling about that. And there is the manner in which the painter has captured Boleslav the fratricidal killer. That is very thought-provoking and I think it will attract the attention of all who have a chance to see the painting.” 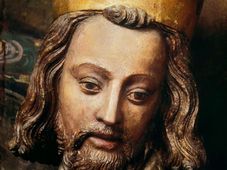 September 28th is a public holiday in the Czech Republic. It is the feast day of St. Wenceslas, the patron saint of Bohemia, and commemorates… 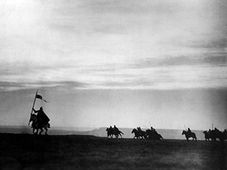 Ahead of the Day of Czech Statehood on September 28th, special screenings of the silent film “Svatý Václav” (Saint Wenceslas), accompanied… 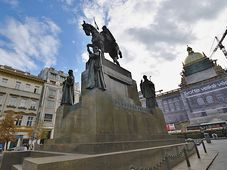 Few people know that Good King Wenceslas, one of the best-known Christmas carols in the English-speaking world sung on the Feast of…