No surprise life has sped up even more since 1982’s Koyaanisqatsi, says director Reggio at Jihlava 2014

The Jihlava festival, which came to a close on Tuesday, is the biggest event of the year in Czech documentary film. In this report, we speak to some of the most interesting guests at the 2014 edition, including Godfrey Reggio, maker of the ground-breaking 1980s film Koyaanisqatsi, main prize winner Martin Dušek and young Czech-Vietnamese filmmaker Dužan Duong. Dušek’s latest film captures an aimless generation of young people through its jobless, poorly-educated protagonist Ráďa. He’s a devotee of “tuning”, a scene in which souped up, often inexpensive cars vie for attention at gatherings in the provinces. Indeed, the director says geography is one reason Ráďa and his mates in the Teplice area get into the tuning lifestyle.

“The specific thing about car tuning in North Bohemia is the location of this piece of land. It’s on the border with Germany so people are able to drag in cheap cars from Germany and to customise them.

“Yes. Imagine you have no money – for me it’s easy to imagine that! – but you can still afford, let’s say, an Alfa Romeo 156 which was for 25,000 euros or more and now you can buy it for 400 and own it. It, like, brings them the possibility to take part in the luxury of mainstream society.”

One of the best-received documentaries at this year’s Jihlava was The Gospel According to Brabenec, a portrait of Vratislav Brabenec, long-time member of The Plastic People of the Universe and an important figure in Czechoslovakia’s pre-1989 underground scene. 'The Gospel According to Brabenec', photo: archive of Jihlava international festival of documentary films The new picture is the work of Miroslav Janek, who co-helmed Citizen Havel and in Jihlava also presented Olga, a tribute to Václav Havel’s first wife. The director explains how the collaboration with Vratislav Brabenec came about.

“Renata Kalenská, who is a newspaper person and friend of mine, called me one day. She had written a book in the past about Vráťa Brabenec, a book of interviews which is also called Evangelium podle Brabence [The Gospel According to Brabenec].

“She said, let’s make a film, sort of following these interviews. And I said, how about Vráťa, would he like this kind of thing? She said, yes, so we got together and we started working on it.”

Had you known him previously? And did you learn a lot about him during the process of making the film?

“I learned a lot about him during the process of making the film. But there is a really funny coincidence, in that in 1979, for one day, I got together with him.

“We were shooting footage for an underground film, with Václav Havel, in it, and Mejla Hlavsa from The Plastic People of the Universe. So I saw Vráťa Brabenec one day in 1979 and then in 2012, for the second time!”

Also in the festival’s main Czech Joy competition category was Mat Goc, a short, stylised and funny documentary in which young Czech-Vietnamese Dužan Duong and his brother visit Vietnam, a country with which many of their largely Czech-speaking generation feel only a loose connection.

Mat goc is a term for Vietnamese who have lost contact with their roots. At times in the film it’s not entirely clear just how well Duong, who is 23, speaks his family’s language.

“I do speak Vietnamese. But I don’t talk much with my parents [laughs].”

But you speak to your brother in Czech, according to the film at least? 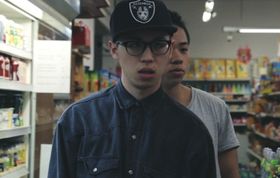 'Mat Goc', photo: archive of Jihlava international festival of documentary films “Yes, I speak to my brother in Czech, because it’s easier, and I can say more [laughs].”

Is it the case that most Vietnamese kids of your generation speak Czech together?

“Yes, it’s very common. I think it will change in the next generation, but our generation is special in that our parents didn’t have time for us…”

Because they often work very long hours in shops?

The film is called Mat Goc and a mat goc is somebody who isn’t true to their Vietnamese roots, who kind of goes Czech. Are most Vietnamese kids of your generation mat gocs?

“They truly are. Because as I said, their parents didn’t have time for them. Which means they cannot have roots, because no-one taught them.”

Do a lot of kids from your background assume Czech names? Do they have Czech names that they use outside the house?

“Yes, because their Czech families… I had a fake Czech grandma [laughs].”

So basically your parents were too busy so you had a kind of Czech nanny?

What has been the reaction of your parents or other older members of the Vietnamese community to your film?

“I was kind of scared, because I use a lot of rude words in it. But they seem to like it, because they see that I’m interested in the culture and my community.”

Though Jihlava is a film festival, it also has a section for radio documentaries. Among those on offer this year was Last Summer in Grand Bruit by Czech Radio’s Jiří Slavičínský, a portrait of a dying fishing village in Newfoundland. Slavičínský says public listening events like those held in Jihlava are the way to go.

“Just when I was finishing this feature last summer in Grand Bruit I wanted to know if the dramaturgy and story worked. So I asked my friends in Newfoundland if they could listen to it. I asked five or six friends and the following day around 30 appeared.

“They really liked it. It worked. I think that’s the way to enjoy radio features, the way to bring them to people, is to organise these kind of social events, listening events, because I think it has a great vibe to it.”

What do you think of the idea of having radio documentaries at a film documentary festival?

“I think it’s a great idea. This is my first time here so I wasn’t sure if there wouldn’t be no-one in the listening room, or plenty of people. And you can see that it works – the room is full.” President of Jihlava festival Marek Hovorka, Godfrey Reggio, photo: CTK Godfrey Reggio, 75, is perhaps best-known for the ground-breaking 1982 film Koyaanisqatsi, which reflected on the relationship between man, nature and technology, combining time-lapse and slow-motion images with the music of the director’s close collaborator Philip Glass.

Reggio was the main guest at Jihlava 2014 and received the festival’s award for contribution to world cinema. As it drew to a close, he told me his overwhelming impression from the six-day event had been the vitality of the young audiences.

“I think having a festival like this in an old town, where everything is in walking distance, rather than in Prague, where so many things are going on, makes a great esprit de corp for those that come.

“I’ve just been amazed at the vitality and interest – the energy. I’m an old guy, so when I see such energy, it pumps me up. So I’m very happy to be here.”

Many of the audience were born after your films were made. What have they been asking you about in particular at master classes and elsewhere?

“Most of the questions have not been about how the films have been made, but about what the intentionality of the film was, what did you hope to accomplish, those kinds of questions.

“It wasn’t about, how did you shoot this or that? At other festivals, that has been the main point of view – what kind of technology did you use? Etc. 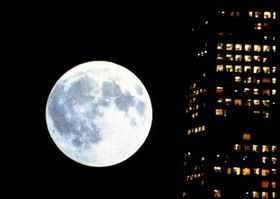 'Koyaanisqatsi', photo: archive of Jihlava international festival of documentary films “But not here. It was more – if I can be so bold – the metaphysics of the motivation behind the films. I was very moved by that.”

Koyaanisqatsi is at least in part about the speed of modern life, though it was made in the early ‘80s. Today life is much faster. How do you view the fact that everyone is online, that life has sped up even more since those days?

“So in that sense I feel most of us are off-planet. We live in a world that is not THE world that we are on, but a synthetic world that predates on the natural environment that we live in.

“I think that started first with the clock in Europe, perhaps Asia but it was industrialised in Europe. It was impactful as the computer is today – it put us all into another zone.”

Do you think we need to do something, to take some steps to slow down, to get away from the internet and constantly being online and super-busy?

“I have no answers to give, really. I would rather look at it this way. We live in a globalised world, we live in a world where there’s one people, one way, one idea – for me it’s techno-fascistic.

“If one wanted to reclaim themselves, then maybe they could think of their world as their range of relationships. That you don’t actually have to make a living – you can actually live.

“But that’s very hard, because everything is predicated on money. It’s a tragedy for me.” 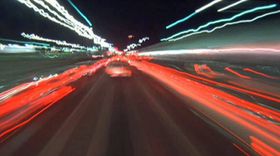 'Koyaanisqatsi', photo: archive of Jihlava international festival of documentary films When Koyaanisqatsi came out it was fresh, it was a new approach to film-making, using time-lapse and so on. But now that seems to be very prevalent. For example in the American series Breaking Bad they will frequently use for no apparent reason time-lapse, showing a night passing, say. Do you feel that you have influenced film and TV in that way?

“Certainly with advertisements, you can’t turn on a TV without seeing time-lapse photography.

“I didn’t do anything to invent time-lapse photography – it’s as old as the camera itself, actually.

“Having said that, time-lapse photography, or pixilation, as has always been used as a punctuation mark, not as a main language or a meta-language, if I may use that word.

“What happened in Koyaanisqatsi is that in order to re-see that which was normal, we had to change the perspective. And of course the motion camera is perfect for that, because it deals in time and time is the medium of the motion picture.

“So, I was able, with my colleagues, to create a language out of time-lapse photography.

“Now immediately after that, advertising… advertising agencies usually suck up these young bright people, they pull them out of their sockets with a big magnet called money.

“They frequently get the brightest and the most articulate young people in their mediums. And those young people aren’t looking for what films are biggest at the box office, they’re looking for new visual language to be able to export into what they’re doing. 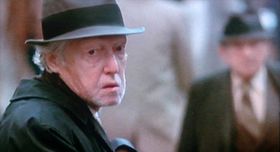 'Koyaanisqatsi', photo: archive of Jihlava international festival of documentary films “And Koyaanisqatsi offered a lot of young people an approach to a visual language. If I hadn’t done, I’m sure someone else would have – it was in the air. It was only a question of time.

“I’m sure many other people had been thinking or doing this kind of stuff but this film remarkably broke out and got an audience and influenced people.”