A good many Czechs in the Toronto would no doubt recognise her in the street, either because they've met her before at local events or because they've seen her on TV. She's Marketa Slepcikova, the hard-working producer and host of 'Novy Zaber' - a half-hour weekly programme in Czech - serving Ontario's Czech and Slovak communities. Novy Zaber means "New Focus" and it is that show that is the focus of our programme today. 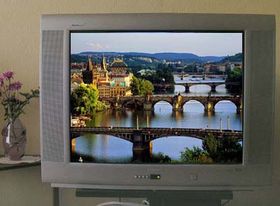 Every Saturday morning Czechs in Toronto can tune in to find out the latest in Czech events and news: in Toronto and in their former homeland far away. Nostalgic for a view of Prague in the spring? Want to re-visit the Vltava River? Or just to want to find out what notable Czechs in Toronto have been doing? Good reason to tune in. Marketa Slepcikova has spoken to many Czechs there, among them authors like Josef Skvorecky, still interested in what's happening in the country of his birth.

In fact, almost whenever anything "Czech" is happening in Toronto it seems Marketa Slepcikova is there, one of the reasons our paths crossed, as Radio Prague prepared its own "Czechs in Toronto" series. Eventually, we sat down to compare notes. I asked Marketa - who worked in TV in Prague before she emigrated to Canada in the 90s - how she described the reason behind her show.

"The title 'New Focus' means that we would like to show the life of the Czech community nowadays. There are a lot of families in Canada now where the children no longer speak Czech. So, we would like to keep traditions and language alive and to show people that they can still 'feel' Czech."

But, Marketa says, getting her own programme off the ground wasn't easy: it required a lot of willingness to take risks, and no small degree of community support. Long before she got it, there were those who dissuaded her from the idea. But, she told me, she didn't let herself be put off.

"This is not really easy to answer, because when I first came here and I wanted to continue my job as a TV journalist, everybody told me 'You want to broadcast for who?!!' They said 'Nobody will watch!' There is no community, no community life. There is Masaryktown, where Czechs get together for cultural events once a year! There is Sokol which has 30 members! There is I don't know what has another 30! So, how would you like to do Czech Television. But, I didn't believe it. The numbers told me that there are some 30,000 Czechs in Toronto and Ontario, so I believed that I could start it!"

Since then, Novy Zaber has become something of a fixture. Basic, straight-up reports from the latest event, whether it's a gathering of Czech-Canadian businesses, famous personalities, or politicians. She's even caught the likes of Canadian lawmakers on camera like the honourable John Turner, no stranger to Prague himself.

"I was in Prague for the first time in 1950, as a student, and I have a great affection for the Czech Republic. I love it, I love Prague!"

Masaryktown Last year's biggest scoop, though, was none other than Vaclav Klaus.

"Last year in the autumn the biggest event was a visit by Czech President Vaclav Klaus to Masaryktown. It was actually the first time in history that a Czech president visited this place. So it was really, really nice. A lot of people came, got to meet face to face. It was, for a lot of people from Ontario and Toronto very pleasant."

Marketa Slepcikova has kept at it, even if her programme remains difficult to produce. Planning, financing, setting dates, and putting together camera crews, week in and week out. But, she accepts it as part of building a new life, a process she has worked at for the last seven years.

"Yeah, half an hour is a lot of work, it's a fill time job for the whole week. I have to do the production, I have to plan stories; it's really a full-time job for me and sometimes even more! Here the rule is that everyone has the same opportunities, anyone can try their hand at anything. But, you have to be strong and you have to have your goals. To know how to do that. I think a lot of immigrants went through this pressure. In a foreign country you are there for some reason, and this is something which is a little bit different from before: I think that people coming now to foreign countries want to achieve something. They don't come just for fun."

That led me to ask why she had chosen to emigrate in the first place. The reason may not be quite the one you'd expect - her husband - was a Romani, and they left at a time when they felt there was little future in the Czech Republic for minorities, when incidents of violence against Roma had escalated.

Toronto "My husband was Roma. At home we felt a lot of oppression, a lot of negative feelings, which convinced us we had to leave. The first year we lived in Holland, the 2nd we lived in New Zealand, and finally we made our way to Canada. So, it was a long journey. I was apprehensive: for me at first it was something like Siberia! {laughs}I was afraid of the winters, and I was afraid of the space, and an 'emptiness' here."

As time passed, though, Marketa gradually began to feel more at home.

"When I saw Canadian nature here it was beautiful! I love it!"

Her marriage however did not last. In part, Marketa Slepcikova says because of the difficulties of adjusting to a new life. In our interview she told me the pressures eventually tore their marriage apart - coming to Canada was not without sacrifice.

Professionally, though, her path has been more bright.

"I have good feed-back, I have a good response, and also I see it in financial support. Someone has to pay me! Because I am independent I have to pay the production myself."

More recently, she has found backing from Ladislav Horak, a Czech-Canadian himself, who runs a major Toronto film & video post-production house. It contains editing suite after editing suite with amazing picture and sound, and he himself is a man who's thrilled by the latest broadband technology. In March, with the help of much of Marketa Slepcikova's material, they launched a paid internet TV site boasting a look at all things Czech.

"Because of that support for Czech-language TV in Ontario I actually came with the idea that we should put together all Czech and Slovak and start broadcasting all around the world with the help of the internet. Which is improving incredibly. TV used to be broadcast through the air, through cable, through satellite. The next step is television is on demand, on the internet."

Together they aim to produce many more hours of local programming but to take them to another level. Marketa Slepcikova says mixing and matching is the most rewarding of all. 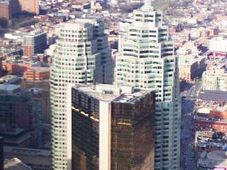 Jiri Skopek - life of an architect

Jiri Skopek is a Czech-born architect who left the country of his birth with his when he was just 19. Studying in London Jiri soon…

There are probably few Czechs or Slovaks in Toronto, Canada, who haven't - at one time or another - visited 'Masaryktown', a famous… 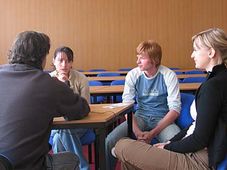