Nabil Hamadeh: Europe must help resolve the crisis in Syria

Nabil Hamadeh is a member of the approximately 2,000 strong Syrian community in the Czech Republic. Although he has strong ties to the Czech Republic and settled here five years ago he has relatives in Syria and is one of many who have been watching the worsening humanitarian crisis there with growing concern. I spoke to Nabil about the situation in his homeland, the migrant crisis and Europe’s response to it and first wanted to know how he came to be living in Brno. 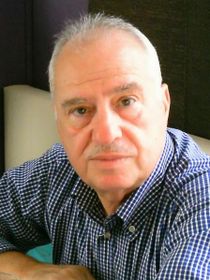 You live in Brno. How big is the Syrian community there?

“In Brno, unfortunately, the Syrian community is not that big, maybe a few hundred people, in all of the Czech Republic there are some 2,000 Syrians, but in Brno I would say about two hundred.”

How do you see what is happening in Syria today?

“I am very sad to say this, but unfortunately the regime that has been governing the country since 1972 has not changed. The president was elected and his term was renewed by seven years, another seven and so it has continued until now. About four years ago, more than four years ago, the people started to ask for some reforms in Syria, they demonstrated for peaceful reforms that would give them greater freedom, more liberty. But they clashed with government forces and a number of people were killed. This revolution followed the so-called Arab Spring which started in Tunisia, then spread to Egypt, Libya and then to Syria.

What news do you have of the situation today, of the humanitarian crisis in the country?

“I still have parents living in Damascus and I hear the news every day, we follow what is happening closely. Unfortunately there are a lot of foreign forces in the country –from Persia, Iran, Iraq and other countries which are mixing the revolution and spoiling the reputation of the Syrians who are asking for reforms and a better life.”

Who are the Syrians fleeing to Europe now – are they young men trying to avoid getting drafted or young men who plan to bring their whole families here? 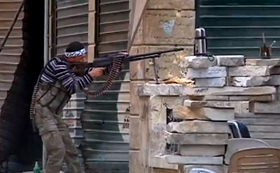 Photo: Voice of America News, Public Domain “Unfortunately the fighting in Syria goes on day and night and the people are suffering a great deal and concerned about their safety. The only safe place left is Damascus where the government has its offices. In most other places there is fighting either between rebels and government forces or between some gangs and the people. So there have already been two or three stages of emigration. At the beginning the regime put a lot of pressure on the rich people, very big pressure and it was getting from them monthly sums of money to safeguard their lives. It was pressuring them not to support the resistance and not to support the revolution. Later on the government even sent gangs to kidnap some of these important rich persons and demanded money in exchange for their release. So gradually these people started to emigrate outside Syria –some to Lebanon, some to Jordan, some to Turkey, some to Egypt and so on. But these are few, this was not a huge exodus. The second stage which we are now seeing - are intelligent people, university graduates, engineers, doctors and so on –we have a few of them here in Brno as well – these people were ordered to join the army and we know that those who join the army never come back. That’s why these people gradually started to emigrate as well and later on, poor people were shifting from smaller cities to bigger cities to find safety, they went from one place to another together with their families and in the end the only way was for them to go to Turkey which had open borders. But in Turkey it was not over because there were other gangs taking their money and promising to get them to Europe.”

These migrants are now flooding Europe. How do you see Europe’s reaction? 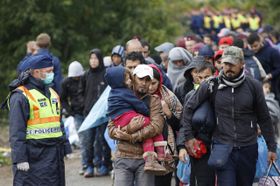 Photo: CTK “Of course every country has the right to accept or to refuse refugees. I agree with that totally. But I think that the EU as a whole is not going forward to solve this crisis. They cannot solve the crisis by accepting these refugees. And these refugees will cause some problems here in Europe. Because they will not speak the language wherever they are going to settle and they will not feel in their new community as they did in their community in Syria. They like Syria, they like their country, they like their family, they like their relatives and our relations in Syria are different from those here. Here you don’t know your neighbour’s name but in Syria you know everyone on the street, who they are, what they do, what their lives are like –they are much more close-knit. But what I see as a problem is that in the past four years Europe has not done anything but send money. The people there do not need money –they want to solve the crisis.”

But what should Europe be doing to help then?

“They have to stop the government shelling the people, sending barrel bombs that hit areas randomly, because when they are dropped they do not always land where it was intended, they hit innocent people, schools and hospitals. And so more and more refugees are escaping from these areas, it is very difficult.”

Are you saying Europe should intervene with force in Syria? What can Europe do? 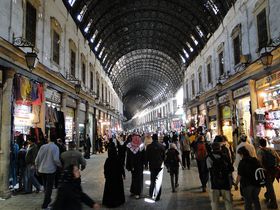 Damascus, photo: Bernard Gagnon, CC BY-SA 3.0 “One or two years ago there were calls for a no-fly zone near the border. Because the main weapon of the government is the air force. If they are stopped in some area –near Jordan, near Lebanon, near Turkey, near Iraq – and a no-fly zone is established as President Bush did during the Iraq war – the greater part of the problem would be solved, but nobody is willing to help settle this issue. This is the easiest way to solve the problem, but Europe is not here. The Americans are the one controlling the situation and the other side is the Russians and Iranians and they are preventing such a solution –they say, no we cannot protect Syrian skies. Turkey has asked for a 90 kilometer no-fly zone along the border and a depth of 30 to 40 kilometers maximum which would be an area safe from attacks – but nobody supported this solution. And so the people have no place to go.”

Right, but the refugees that are here need to be helped –so what should Europe be doing about that? Do you think refugees should have the right to pick the country where they want or live or be allocated to a given country as the situation is now? What is your opinion?

“My opinion is that Europe is doing as much as it can, more than it can, but the problem is not going to be solved this way. Today there are a few thousand refugees but this will not end so. There are still 10 million displaced people in Syria out of 23 million inhabitants, so they have to expect fresh floods of people, fresh floods of people coming –and what’s to be done with them? Now we have a problem with 120,000 –but what will Europe do if another 500,000 will come? That is not going to solve the problem, unfortunately. ” 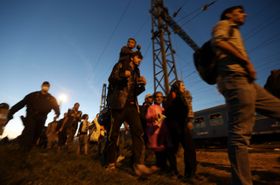 Photo: CTK So Europe should make a bigger effort to resolve the problem in Syria?

“I believe they should push for a political solution and they have to force the regime to solve the matter.”

If we turn to migrants in Europe, why do so few Syrians want to stay in the Czech Republic? There is a Syrian community here after all….

“Some of them have already joined their families here but it is very few, I could count them on the fingers of my hand. One problem is the language, that is one of the major issues, and the second thing is the possibility of finding work. And there are less opportunities here than in Germany. The Czech Republic is an industrial country with 10 million inhabitants, maybe they can give work to 5,000 migrants as they are declaring these days, that’s OK, but Germany is a country of 85 million people and the chances of getting a job are much better.”

Are Czechs’ fears that Syrians, and migrants from the Middle East in general, would find it hard to integrate justified?

“I do not think that is an issue. They can acclimatize wherever, with whatever community they join, Syrians are spread out all over the world, though not is such large numbers. Of course, they would face difficulties with the language which they would overcome in a year or two. But I believe that if the crisis in Syria will be solved within a reasonable period, say one year or at the most two years more than 50 percent of Syrian refugees will return to Syria. They will not want to stay here. Except some people who will get good jobs, they will settle wherever they want. But if the crisis in Syria will not be settled within the next two years there will be a lot of Syrians staying in Europe. If it were to take four or five years then the majority of them would stay in Europe, unfortunately.”

What are your hopes for Syria? 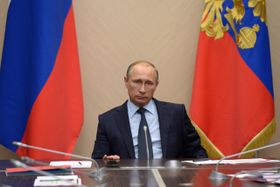 Vladimir Putin, photo: CTK “Now I see that Russia, President Putin, is trying to put some pressure and apply his own solution because he is not supported by anybody, he is not supported by the Americans and the Americans are not serious in solving the Syrian problem. Meanwhile ISIS gets bigger and bigger. It may be that Russia has already sent a lot of new weapons with which to fight ISIS. Maybe by the end of the year they may reach some political settlement, which we hope, which we hope. But only one country cannot arrange this. Mr. Putin alone cannot do it. The US alone cannot do it. All efforts to mediate a solution in the past four years have failed. In the past four years everyone has spoken about the need to resolve this crisis but with no success because there was no force to impose a solution on the regime that is governing today. They have to force the regime to accept a peaceful solution and control it.”