Life on a motorway

I am standing on Prague’s magistrála, an artery cutting through the centre of Prague. If you have ever visited the Czech capital you could hardly have failed to notice the main road which cuts across the top of Prague’s main square, Wenceslas Square. It was built in the early 1970s to ease growing traffic in the capital, but it soon became a nightmare for the people living along the magistrála. It was originally designed for 20 000 vehicles a day at the most, but nowadays nearly five times as many cars drive through the city each day. So, how come there isn’t a ring road in Prague just like in most other European cities? That’s an issue I discussed when I met architect and art historian Zdeněk Lukeš. 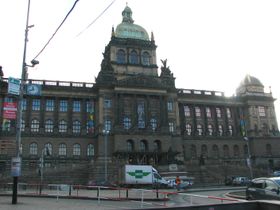 “There were some plans in the period of the First Republic to build a ring road around the centre of Prague. Everything was already prepared but the plans were never realized. In the 1950s, some young engineers actually suggested building a system of four speedways in the city centre with two of them parallel to the other two.

I think that the main idea was that it wasn’t so expensive and it was much shorter. Another reason was that there was no respect for the historical structure of cities. It was a period of very proud new urbanism, which ignored the old urban structures in historical cities. This is not a problem only of Prague but of many other towns in Moravia and Bohemia.” Fortunately, the daring plan of building four speedways in the centre of Prague was never accomplished and only one of them - the magistrála – was completed. Even so, many historical buildings had to make way for it.

“They demolished many important houses that stood in the way. I could mention some of them, for instance one of Prague’s most beautiful railway stations in Těšnov from the mid-19th century, which was totally demolished, the Summer Pavilion in the close vicinity of Prague’s Municipal Museum and many houses near Wenceslas Square, such as hotels and neo-Renaissance buildings.”

Karolina Vočadlo used to live in one of the houses right beside the busy thoroughfare but she also remembers the times when it used to be a pleasant, quiet avenue. 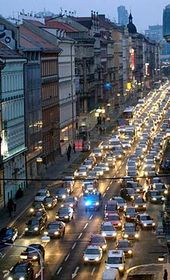 Prague’s magistrála - Legerova, photo: CTK “I was brought up in London but my father was Czech. His family lived in a beautiful flat in Legerova. It used to be called Třída lidových milicí when we used to visit my grandfather and grandmother. We would go there every summer for the holidays since I was a baby. It’s a long time ago, but I do remember that road as it was before the bridge was built above Nusle. I don’t remember if there were trees lining it but I think there probably were. But I do remember a wide and quiet road with a little brick wall at the end of it. We used to go down there for walks and there was a lovely view of Nusle.”

When Karolina came back in the mid 1970s after a break of a few years, she could hardly believe her eyes. In 1973 a bridge spanned the Nusle valley, connecting the Pankrác district and the south-eastern parts of Prague, enabling the artery to forge ahead through the city centre:

“I remember being startled by the change in that street. It was now a very busy street with a big bridge on the end of it. It was basically like a motorway with four lanes. Obviously it is much busier now but I do remember being shocked at the difference between what I had remembered as a very young girl and what it was like when I went in the 1970s after a break of a few years.” Eventually, Karolina settled in Prague in her grandparent’s apartment. However, the noise and polluted air eventually drove her away, as she explains to me in her new flat located in a very quiet part of Prague’s Vinohrady district:

“I loved the flat but I did want to move out because it was, or it still is, very noisy. It was very noisy and very dirty. Whenever I tried to clean it I knew that by the end of the day the dust would be back from the exhaust fumes from the cars. But it was mostly the noise. It was difficult to work and particularly to sleep there...”

Alžběta Rejchrtová has lived by the thoroughfare for more than thirty years. But that doesn’t mean that she has put up with it. In the early 1990s, when traffic in Prague rapidly increased, Mrs Rejchrtová, along with other people living in the close vicinity of the artery, established a civic association striving for better living conditions. After years of legal battles with Prague City Hall, they recently achieved a breakthrough ruling: the court ordered the municipality to reduce the levels of noise and pollution.

I met Mrs Rejchrtová outside her house to find out what it was like, living so close to one of Prague’s busiest roads. 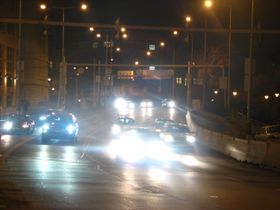 “Well, you can hear it yourself. It’s quite unbearable because you cannot open the window and leave it open. You cannot sleep at night. I myself have to use silicone earplugs, which are not available here. And it causes a lot of other health problems like insomnia or heart problems.”

How long have you been living here?

“We moved here in 1974, one year after this artery was put into operation.”

Why did you move here in the first place when it is so noisy?

“The situation wasn’t bad at all at the time. The traffic was much, much lower.” Have you ever considered moving away?

“I tried to sell our flat but it is practically impossible to sell because if somebody who is interested in buying the flat comes here, opens the window and hears the noise, he just leaves.”

Mrs Rejchrtová and her neighbours now expect the City Hall to take some immediate measures to improve their situation, such as installing noise-proof windows, reducing the speed limit on the artery or building a tunnel over the noisy road. But she is well aware that in the long term, the only solution is completing the ring road around the city. Experts say that will take at least a few more years. Until then, the five thousand people or so who live along the magistrála will have to brace themselves against the noise or move away, that is, if they manage to sell their flat.

The lower house of parliament has approved a new legislation amendment, which would make it easier for district authorities to remove…