Like many child survivors of the Holocaust Vera Egermayer, started a new life in a new environment soon after the war. Her family moved to New Zealand when she was just eight and the country became her second homeland. A few years after the fall of communism in Czechoslovakia she returned to her birthplace as New Zealand’s honorary consul and faced the ghosts of the past, the murder of family members and her own internment at Terezin. 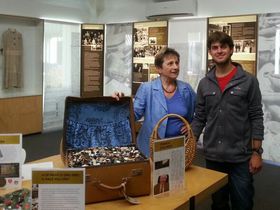 Vera Egermayer thanks Ariel, an Israeli backpacker, for his founding contribution to the Memorial, photo: NZ Children's Holocaust Memorial website As a witness and Holocaust survivor she is now leading a project to build a Children's Holocaust Memorial in Wellington, New Zealand. The memorial is to be built from 1.5 million donated buttons –one for each Jewish child killed in the Holocaust. Over the phone from New Zealand she told me how the idea arose.

“Well, an idea is never just one person’s because usually you are inspired by something else that happened, but in this case the driving force was a teacher in Moriah School, a small school in Wellington, the capital of New Zealand, which had about 30 pupils there. They were learning a little bit about the Holocaust and about WWII and other tragedies – gently –because of course the way you expose young children to this kind of information has to be well considered. And they started being curious about what happened to those children and how they themselves could, symbolically but actively, do something about it. So that is the way the idea was born: learning about children who had suffered and having an inspiring teacher and getting the idea of a symbol. The button is, of course, one of the best symbols because it is like a circle of life. It is touched by people’s hands, both by the giver, by givers from all over the world, and also by children handling the buttons. Because, you know, to count physically 1.5 million buttons over three years is quite a task. Somebody said to us –why didn’t you just weigh the buttons? You can extrapolate on the basis of a few kilos. But, no, every button was touched by a child’s hand and an adult’s hand from somewhere else…so that is how the idea arose. “

Vera, each button represents a lost child. Do the buttons come to you with stories of their own? Do people send buttons of sentimental value to them?

Photo: NZ Children's Holocaust Memorial website “Absolutely, there are all kinds of stories from the givers –I will tell you a couple that I remember – but one of the best ways to get that information is on our website. There is a domain called Vestiges of Love where we have a sample of the letters received. There were many, many. They came from non-Jewish people, they came from people from all walks of life. A lady in Oslo sent 88 buttons because there were 88 Norwegian children who were murdered and her family was in the resistance, so that was her story. Someone sent us the button of one person: their cousin, and gives that story. We got a button off a soldier’s uniform….in all many, many stories, personal stories which make it a moving project. Some of those stories are on our website and others will be added.”

So it is not just people who sympathize with your project –has it also given the children interaction with WWII survivors or their descendants?

“They are not survivors who send the buttons. The buttons come from ordinary people who read about the endevour and who wanted to be part of it. It was a sense of compassion. It started off with children, you know the world learned that children had suffered and some of them considered their own suffering. For example a cousin of mine had just been diagnosed with cancer. She was 55-years-old and she sent in 55 buttons, thinking of children suffering somewhere else. So the connections are very intricate, it is not directly survivor to children or anyone associated with the war and that is the beauty of the project: that it can give life to all kinds of people who have suffered and have empathy.”

So Moriah schoolchildren have now collected 1.5 million buttons and are fundraising to build a memorial for child victims of the Holocaust. We know it is to be built in Wellington but do we know what it is going to look like? Do you have ideas already? 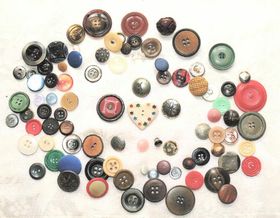 Photo: NZ Children's Holocaust Memorial website “Yes, we do have some ideas because this project captures the imagination of artists and writers. We have had many proposals, but we cannot say what it will look like until we have an actual site. But if you would like some ideas –then there has been one from the children themselves. They thought of a labyrinth that people could wander through and where the buttons would be shown against a transparent exterior with maybe water running down, but that is just one of many possibilities. When we get the site we will get artists on the job and there are no limits to what it can be. We have studied Holocaust monuments and sculptures around the world and it really lends itself to a creative mind to enforce the esthetic, the moral message of what we are trying to do. Because our main aim, and this could be a little bit contrary to other projects, is to raise awareness, to let people know what we are doing and to get them on board as we say. The fundraising –well, of course we need money – but that is not our message and we will gratefully take whatever small donation anybody gives. Our message is: know about it, feel for the project. And we have recently modified our website along those lines. The design virtually takes any appeal for funds out. There is a small mention: if you want to give, go to another website. But we want to tell people that this is going on.”

Vera, how do you come to be involved in this project? It is no coincidence, is it?

“ Not at all. I could give you the broad view. I only became interested in my own Jewish side –even though I knew what had happened to me and us - when I returned to Prague about twenty years ago to become the honorary consul of New Zealand. That kind of livened my interest because I was walking the streets I was raised in and I was part of a number of groups here –Hidden Child for instance – and that was the beginning of my enlightenment with regard to my Jewish identity and of course I have been rather active in New Zealand as well in these areas. What particularly appealed to me in this project that it was children-to-children which is actually unique and that, on one occasion, I spoke to a group of children and I could see their reaction to my story, because it was a child’s story. It was not an adult’s story or a general story, it was one single little child’s story.

Photo: NZ Children's Holocaust Memorial website And please, before you think that it was sentimental I must point out that it was the story of a lucky child. Everything that I told those few children in Moriah School was all the lucky things that had happened to me in my life. The fact that I was born at all, the fact that my father was Arian and therefore that protected us to some extent, the fact that I was transported to Terezin quite late –on March 16th of 1945, the fact that the war came to an end, the fact that we were liberated in Terezin and could get straight out, we didn’t have to suffer the plague of typhoid – that was my story to the children and I think that that moved them and kind of brought me aboard. I see the project in a different light as time goes by. You know how sometimes when you work on something it reveals itself to you… but the basic thing was there were these little children in New Zealand interested in what happened, wanting to know more about the children who had been murdered –and there was I, in-between, not a button, I had been spared -so those were some of the motives for my doing it.”

You were one of those who survived, but of course so many were less fortunate – how has this project touched you on a personal level, has it brought back painful memories?

“No, no it has made me understand my own life, because you know to talk about it you have to document you own life, learn about it. It puts me in a broader context, so this voluntary work that I am doing, and have been doing for about five years (under the aegis of the New Zealand Holocaust Centre) has actually brought me much in the way of enlightenment and giving something back to people. “

To find out more about the project please go to: www.nzchmemorial.com