It is exactly 50 years since Czechoslovakia’s great triumph at the world Expo exhibition in Brussels, at which the country won the best pavilion award and many Czech and Slovak artists received special prizes. To recall the Czechoslovak success at Expo 1958, the City Gallery of Prague this week opened an exhibition entitled “Brussels Dream”. It aims to recreate the famous Czechoslovak exhibition with authentic objects from Expo 58. It also reflects the lifestyle of the early 1960s, marked by the rise of popular culture and affected by the so-called “Brussels style”.

Expo 1958 was the first major international exhibition after the end of World War II. It was conceived as a broad cultural exchange and a celebration of the atomic age, represented by the towering building of Brussels’ Atomium. For communist Czechoslovakia it was an opportunity to present itself to the Western world in the best possible light. Daniela Marková is one of the curators of the Brussels Dream exhibition:

“The 1950s was a dark period and Expo 58 was one of the first opportunities for the country to open up to the world. For many people it was the first opportunity to travel to the West. But above all it gave Czechoslovakia the chance to return to the fold of culturally and technically developed countries where it belonged between the two world wars.”

One of the lucky Czechs who could travel to the West was Alexej Kusák, an art historian, who at that time worked as a reporter for a Czech cultural magazine: The exhibition 'Brussels Dream', photo: CTK “For us it was a miracle to travel abroad. Indeed for most Czech journalists it was the first opportunity to travel to the West. It was a period of cultural liberalization. Artists who were already known but didn’t have that many possibilities to present their work could take part at this event. At the centre of attention was Jiří Trnka, who presented his film puppets, and the country’s top glass and china artists. Their work was, of course, linked to the Avant-garde period of the First Republic.”

The Czechs were praised mainly for their glass, china and textile design. But what was most important was the overall concept of the Czechoslovak pavilion, inspired by stage design. Expo 1958 also saw the first performance of the legendary Laterna Magika or Magic Lantern Theatre, which used a combination of film projection and dance, sound, light and pantomime in place of words. The exhibition 'Brussels Dream', photo: CTK The Brussels Style is typical for its use of pastel colours, various geometrical forms and modern materials, such as plastic, metal, glass and concrete. I asked Michal Froněk, designer and the man behind the overall visual concept of the 2008 exhibition, to what extent it affected him and what it means to him.

“For me this period is very soft and roundish. For our display system we also decided to use roundish podiums and cabinets. So it’s kind of a soft exhibition and all the objects are hanging in the air.”

“Yes. At that time Czech design tried to follow Italian trends and in the 1960s, everything was very, very light.”

What about the colours?

“It was a very colourful time.” 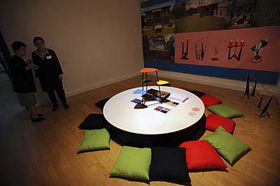 The exhibition 'Brussels Dream', photo: CTK Mr Froněk has also pointed out some of his favourite objects at the exhibition:

“Here is one of the most important objects typical of the period. It’s a famous coffee and tea set by Jaroslav Ježek made of china. It has really characteristic decorative colours and shapes. For me, this is a very typical object of its time.”

This is a complete living room set with a coffee table and a sofa… When was this made?

“That was designed for the 12th trienale in Milan (that took place in 1957). At that time Czech furniture won many awards. This is one of the most beautiful objects here at the exhibition. It’s a chair by Miroslav Navrátil with a laminated body and wooden legs. It has a really futuristic composition. I think that at that time Czech design was really important in the European context.” 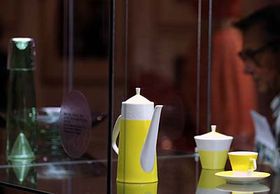 The exhibition 'Brussels Dream', photo: CTK Expo 1958 aroused a huge wave of interest in lifestyle and design in Czechoslovakia. But to what extent did the Czechoslovak exhibition in Brussels reflect the reality of communist Czechoslovakia? How many Czechs or Slovaks really owned the objects exhibited at the Expo?

“Of course the exhibition didn’t reflect reality. It presented a model of an ideal society. It was like a fairy-tale or a dream – which partly explains the title of our exhibition. Even the most common objects presented at the Expo, such as shoes and furniture, were only prototypes that were never produced, not even in the years following the exhibition. Therefore people tried to make things themselves, but the forms slightly changed in the process. So what you see are often bizarre homemade objects combining the old and the new. This is what many people recall when you say Brussels style.” 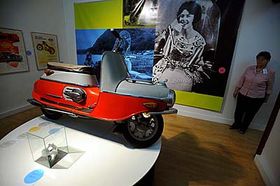 The exhibition 'Brussels Dream', photo: CTK The Czechoslovak presence at the Expo in Brussels was indeed like a dream, but unfortunately, a rather short-lived one. For a while Czechoslovakia opened its doors to the world and basked in the unexpected glory, only to close itself up again, living a dreary life behind the Iron Curtain for the next thirty years. The Brussels Dream exhibition is accompanied by various events that illustrate the lifestyle and culture of the turn of the 1950s and 1960s, including fashion shows, film screenings and music performances. The Brussels Dream exhibition at the City Gallery Prague will remain open until the end of September. It will them move to the Moravian Gallery in Brno. 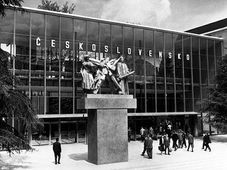 Expo 1958 was the first global event of its kind after the Second World War. Nearly 50 countries brought their latest scientific breakthroughs… 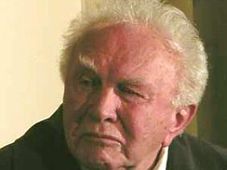 For this edition of Czechs Today I met octogenarian Zdeněk Mahler, born and raised in Prague’s Industrial Vysočany district. Over the…