With Christmas just around the corner the hustle and bustle in Prague’s streets and shops has visibly intensified. Yet behind the bright lights, the ever-present advertisements and Christmas carols the mood is slightly more sober this Christmas, reflecting the deepening recession and bleak outlooks on the job market. Czechs are enjoying the Christmas atmosphere but they are spending less on presents and are far less willing to take out loans for exotic Christmas holidays or buy things on lease as they have been doing for years. 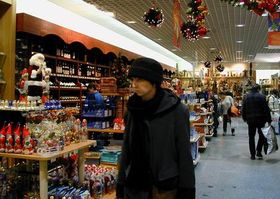 Photo: archive of ČRo 7 - Radio Prague However the idea that the economic crisis would trigger a return to spiritual values would be misleading. Czechs are simply more careful in spending their money and more zealous in looking for bargains. According to a poll conducted by Deloitte and Touche half of Czechs would prefer to get money for Christmas and even if people cannot afford to spend as much as they normally would on presents they are determined to fork out more than usual for food and drinks over the holidays. This coincides with poll results from 2008 –the start of the economic crisis. Bronislav Pánek from Deloitte and Touche says this is a common reaction.

“I think Czechs want to enjoy the Christmas holidays and put the economic crisis and their own problems aside for a few days. This is clearly reflected in the higher-than-usual amount that they are setting aside for food and drink and for the festive Christmas dinner in particular.“

Czechs polled say they are expecting to spend around 10,000 crowns in all on Christmas this year, which is less than half the average monthly salary and two thousand crowns less than last year.

Czech children find on average five presents under the tree and although electronics are a hot favourite salespeople say parents are more inclined to combine costlier electronics with cheaper wooden toys or family board games this year. Monika Cihelková who sells children’s toys says the reasoning is obvious.

“Look at it this way: an evening at the cinema for a four member family costs approximately the same as one of our more expensive board games and it can keep children occupied for many more evenings.” 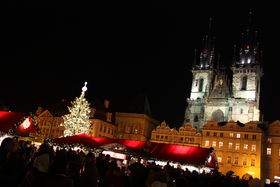 Photo: Barbora Kmentová Although Prague’s shops are milling with people, many are out in search of bargains at early Christmas sales and cosmetics stores which have slashed prices ahead of Christmas to help compete with increasingly popular internet sales. Even so, 43 percent of Czechs say they are buying all their presents over the internet this year and they are expected to spend over 16 billion crowns on internet purchases. There is a special website offering a survey of available products and their price-range. Over 80 percent of Czechs polled said they check it out before setting off for their mall or ordering online. Czech Post says it is snowed under with Christmas deliveries which have reached a record number already, 30 percent more than last year. Employees are working overtime to meet demand and Czech Post is employing another 3,000 workers to help deliver parcels around the country. Jana Neumanová says there will be no respite until Christmas eve.

“We are working extra shifts and even helping to sort parcels by hand so that all presents sent via Czech Post are delivered on time and our work gets done sooner.”

While many Czechs have already finished their Christmas shopping in the comfort of their homes the shopping frenzy for groceries is still to come and 10 percent of Czechs are traditionally last-minute shoppers. The battle over opening hours during the holidays has been going on for several years now with trade unions arguing in favour of restricting opening hours which would allow salespeople to enjoy the holiday season the same as everyone else, and sales outlets opposing the demand in view of high profits. Judita Urbanková from Ahold says it would be nonsensical to close their doors when people want to spend money. 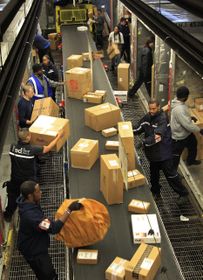 Illustrative photo: CTK “There are many who say shops should be closed at Christmas and on other state holidays but there is no arguing that our customers want us to stay open for as long as possible and many take advantage of the fact that they can shop at the last minute.”

Senator František Bublan from the Social Democrats says his party will push for the change although it may not be widely popular.

“I see this as something that would be positive for people in the long run. That Christmas would be perceived as a spiritual holiday rather than a day off on which people can do their shopping and that’s it.”

Tomas Kostelecký from the Sociology Institute of the Czech Academy of Sciences says there is little point in pushing for a change that goes against the general behavioral trend in this part of Europe.

“If you look around you will find that the vast majority of post-communist states are like us in this respect. It is only in countries with a strong Christian tradition where you will find popular will to have shops closed on Christmas and other religious holidays.”

Surprisingly many salespeople are not protesting. Though in the past they would generally have welcomed a few days off, the economic crisis has changed many people’s attitude. Vera, who works at a shopping mall, explains why:

“It is financially advantageous. You get paid an extra day’s salary plus a holiday bonus, so salespeople get an additional five hundred crowns in addition to their wages.”

Although the traditional Czech Christmas good wishes “přeji bohatého Ježíška” ( Best wishes for a generous Christmas) may not materialize for everyone there is one thing that will make the holiday more of a family event. The tradition of baking a wide variety of Christmas cookies in the home is back with a vengeance. In recent years many busy mums juggling a family and a career simply ordered the cookies at their local pastry shop. But with the higher price of basic ingredients it saves quite a lot of money to make them at home. Pastry shops are already noting a steep drop in demand. 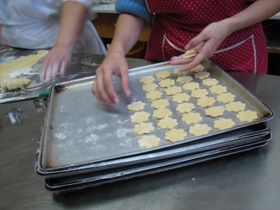 “Of course people would be interested in buying. But they have less money so they are not placing orders.”

It may be a less opulent Christmas for many Czechs this year but one thing they will have and that is time together. With Christmas eve falling on a Monday most people will have five days off from work in a row giving them time to cast aside their daily concerns and enjoy the company of their loved ones. And those worried about money can always put a carp scale under their plate on Christmas Eve: an old Czech Christmas tradition that is guaranteed to bring prosperity in the coming year.