Czechoslovakia: 'Island of Democracy' and refuge between the wars

Czechoslovakia was one of the few states in Europe between the wars with a genuine parliamentary democracy. The First Republic, as it became known, was a multiethnic one: apart from Czechs and Slovaks, nearly a quarter of its people were ethnic Germans; the Tesin region in the north had a large Polish minority, while South Slovakia and Ruthenia were home to some three-quarters of a million Hungarians. Up until the Munich Pact of 1938 and subsequent Nazi occupation, Czechoslovakia was a magnet for refugees from Hitler's Germany, communist Russia, Ukraine, and elsewhere, says Dr David Kraft, curator of the new exhibit "Exile in Prague and Czechoslovakia 1918-1938".

"Czechoslovakia was in the period between 1918 and 1938 a democratic country. It was open to refugees and it was very easy to cross the border, which was very important, and it was also a multinational state. In this respect, for example for the people who came from Germany, it was very easy to establish new lives here."

"The Czechoslovak policy towards immigrants was very much differentiated; it was very open to the people who were known journalists, scientists, politicians, etc and was generally open for people like the Social Democrats who fled Germany after Hitler came to power.

"The policy was also very much open to the Russians in the twenties, for example, when the so-called Russian Action was founded. The situation was more complicated for communists; the policy was very restrictive towards communists and people with no 'obvious' political alliance, like Jews, or people who had no, or nearly no property.

"It must be said that Czechoslovakia did not grant 'asylum' in the twenties and thirties; it just had very flexible legislation, which enabled many people to stay for long or 'indefinite' periods of time."

Between the wars, Czechoslovakia was - according to official documentation -- host to tens of thousands of refugees. They arrived in waves, with the first and largest group, that of Russians and Ukrainians, arriving in the early 1920s. They fled the new Soviet regime, along with smaller groups of Byelorussians, Armenians, Kalmyks and others who found themselves on the losing side of the Bolshevik revolution. The Czechoslovakia of President Tomas G Masaryk, says Dr Kraft, was seen as a welcoming "island of democracy".

"Many Russians came here after the end of World War I, after the Civil War in Russia, many also came in some affiliation to the Czechoslovak legions which were active in Russia. Some of them left Czechoslovakia in the thirties for France and the United States, but many of them stayed and obtained Czechoslovak citizenship."

RP: Large numbers of anti-fascist Germans, and Jews of varied backgrounds and nationalities, began seeking refuge in Czechoslovakia in the early 1930s. What kind of numbers are we talking about overall?

"Well, Czechoslovakia hosted over two and a half thousand political refugees. After Britain and France, it was the largest community in Europe, in the 1930s. The numbers are not very dramatic, but it must also be said that, for example, Prague was a bilingual town where German was normally spoken, so many people came here and found their way relatively easily, so the exact numbers are difficult to say. The big wave came, of course, after the Treaty of Munich, and then after 15 March 1939 there were many attempts to leave the country.

RP: Who were some of the well-known people who sought refuge here?

"Well, we have intentionally not paid attention in this exhibit to well-known people like [the German writers] Thomas Mann, Heinrich Mann or [Czech-Austrian painter] Oskar Kokoschka, to give you just a few names. We have tried to trace through the archives normal rank-and-file people; we have found in many cases the way that led them to the country and also, in some cases, were able to identify their fates after 1938."

"As far as very known personalities, there's Otto Wells, leader of the German Social Democrats, [whose party was the only to vote against Hitler's March 1933 "Enabling Act" that stripped Parliament of its powers and legalised the Nazi dictatorship], Prof. Hans Kelsen, who was professor of law at the German University of Prague in the thirties. But generally we have tried to establish what life was like for the normal rank-and-file refugees because they constituted 95 percent of the people who were here."

RP: In the introduction to the book it speaks about Czechoslovakia between the wars as being an 'island of democracy'. Was it for that reason, really, that the country became the third largest centre for refugees? Or what were some of the determining factors that led groups of people to come here?

"I think it was definitely so. It was a country that was multinational, which had an open educational system. There were many university students who came to complete their education. Maybe you have noticed in recent days [famed Nazi hunter] Simon Wiesenthal died. He was from [part of Ukraine] and he studied architecture in Prague in the thirties. That was very typical for people from Galacia, for example, and this was a democratic country with a functioning parliamentary system, and there was no comparison to the communist system in Russia, to the Nazi system in Germany or to the very authoritarian regimes, like in Hungary or Poland."

"So I think there were objective reasons why people were coming here. It was seemingly very safe here in the thirties."

RP: Lastly, I wonder if you could draw some parallels between Czechoslovak immigration or political asylum policy at that time and today.

"If I am to speak personally, it seems to me relatively sad that this country, which had many citizens who had to leave the country for political reasons - back in 1948, 1968 and of course going further back, also in 1938 - it seems to me the country is not very much open to asylum seekers and that our policy is relatively restrictive. Definitely it's restrictive vis-à-vis the situation as it was here in this country in the twenties and the thirties." 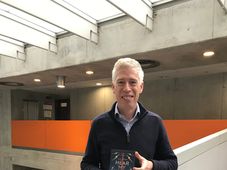 Earlier this year the Czech Republic marked the 80th anniversary of the Munich Agreement, signed in September 1938 by the leaders of…