What did famous Czech actors, aristocrats, politicians and scholars write in their books? Who did they dedicate their books to and what were the fates of their libraries after their deaths? An exhibition at the Museum of Music called 'Who Could It Have Belonged to?' throws light on these questions and takes visitors to a world that is slowly disappearing. One of the organizers of the exhibition, Richard Šípek, took me around and started by explaining the idea behind the endeavor, which was preceded by four years of painstaking research. 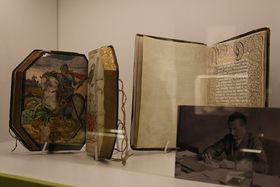 Photo: archive of Museum of Music “The exhibition focuses on the book collections of famous and important people from Czech history, literature, art and other public spheres. But because it is very difficult to exhibit only the books, as they are so to say flat, we decided to complement them with small objects of everyday use belonging to the people whose books are on display.”

So give us an idea – whose books can we see here? I understand there are personal things –like notes that they scribbled inside the books, or dedications to others who received the book as a gift and the fate of home libraries of famous people…is that right?

“Yes, definitely, the book provenances actually represent hand written and printed records that were glued into the books and which are meant to denote the ownership of the books. But not just that, as you mentioned there are the dedications in books that were given as a gift to friends, superiors or lovers.”

“Yes, of course. Our focus is on the book provenance records, that’s what interests us and that is what makes the books generally interesting. Because you have many copies from one edition but what makes it unique are the handwritten and printed records in the books because they attribute the books to the libraries of the people we know from history, who are somehow important for the development of the Czech nation and the Czech language.”

Can you just mention some of the famous people whose books we have here?

“Yes, of course. In the first part we have books from the libraries of Czech aristocrats, so I should mention Count Sternberg, Count Klebelsberg but also ordinary people … we have books from the library of Vaclav Krolmus, who was a Czech clergyman. And here we actually have something unique –this small book that represents a formerly widespread sort of literature –the so called Ars moriendi or Ars Bonae Mortis meaning The Art of Dying Well. The books were collections of prayers to be said before one’s death. ”

I should say that the book is tiny, the size of a mobile phone….

“Yes, exactly and the book we are just looking at was retrieved by Vaclav Krolmus from a coffin when a tomb in the Church of St. Tomas here in Malá Strana was opened in the 19th century and he pointed out the circumstance on the front pastedown -there is a handwritten message that the book was taken from a coffin in the year 1853. And what is unique is that this very book is the only copy of its kind preserved to us – most probably because it was closed in a coffin.”

Right…and what else have we here?

The second part of the exhibition, called People Around the Book, is made up of exhibits from the libraries of people who were somehow involved not only in the creation of books –their publication, printing and illustration but also the people who distributed the books and placed them in libraries. The most important person we have here is Vaclav Hanka –the very first librarian in the National Museum. On the other hand we also have books with handwritten notes from those who stood on the opposite side of the barricade so to speak– those who prohibited books, the censors, the inquisitors and people like that.” 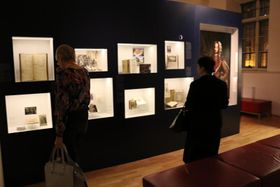 Photo: archive of Museum of Music “Actually, right now we are looking at three books from the library of Josef Dobrovský, an important personality of the Czech National Revival, and the book in the lower showcase is an interesting piece because it was purchased by Josef Dobrovský most probably not for reading but as a sort of medium on which he wrote a completely new book. The original is a law dissertation but he used it to paste in pieces of papers containing his notes about newly found flowers, herbs and plants.”

There are a lot of notes in this one, things crossed out, rewritten….

“Yes, we are just looking at a book that was written by Josef Dobrovský and this copy was used by him to prepare a new edition – so parts were crossed out and replaced by new notes. So it is, so to say, a re-written book.”

So we can see how difficult it was when there were no computers….

“That’s right and we are just amazed how much they were able to produce with just the help of a quill and ink.”

“Here is another part of the exhibition called On the Wings of the Muse. It is dedicated to artists, novelists, poets, actors and in general people from the arts world.”

You have a book here belonging to Emma Destin and Božena Němcová I believe?

“Emma Destin had her books bound by one book binder in beautiful textile bindings with floral motives and decorations.”

“Yes, but they are in fact books. She had them bound by one book binder and all of them are bound in beautiful textile bindings with floral motives and decorations. She was obviously very fond of her library because in the upper showcase you can see her catalogue of old prints from her library written by her own hand.”

Yes, it says Library of Emma Destin and the year 1912…

“And underneath you can see the motto for her library: Grow and Multiply”

“Definitely. We have to realize that we are talking about a time when there was no technology as we know it and that libraries represented almost the only source of knowledge and also entertainment.”

So you were also able to learn something about the people themselves by picking up their books….

“Of course. Most of all from the notes they wrote in the margins, how they commented on the text and how they understood the book. “ 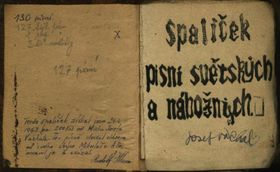 Photo: archive of Museum of Music How did you get all these exhibits? Are they loaned?

“Most of them are from the collections of the National Museum and some of them are borrowed from archives and other institutions.”

“This is a part you mentioned when you spoke of writer Božena Němcová. Here we can see the inkwells she most probably used when writing all her novels. And here we have a loan card from the National Museum library with her own signature.”

“And here we come to a part of the exhibition called “It is Not Advisable to Leave a Woman Alone With a Book”. As we know it wasn’t always acceptable for women to read too much because allegedly it would take their time away from household chores.”

Ah…so we have a collection of cookbooks here ….by Rettigova it seems.

“Yes, these are by Magdalena Rettigova –a Czech cook and writer who is the author of the most famous Czech cookbook of all time.”

So what kind of books did women read back then –if they read at all?

“Well, you would find here mostly novels, Belles Lettres literature, poetry and books they received as gifts from men or other women. ”

“As we know it wasn’t always acceptable for women to read too much, because allegedly it would take their time away from household chores”

So when did it become acceptable for women to read?

“Well, actually quite late but here we are talking about the 19th century. It was a time when women started reading but it was still at a breaking point – so it wasn’t a generally accepted phenomenon.”

“And now we come to the final two parts of the exhibition. The last but one is devoted to the collections of people who collected beautiful are rare books that were published in small editions- the bibliophiles. And the last part of the exhibition tries to focus on the book as such – as an object with a life of its own, which it experienced through changing owners and changing libraries, how the book travelled between libraries…”

“Do come and see a world that is slowly disappearing and which we are slowly losing.” 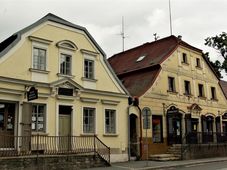 The central Bohemian home of writer Božena Němcová, known today as the “mother of Czech literature”, has been restored to its full…