Dozens of alumni of the Czechoslovak state schools set up in the United Kingdom by the wartime government in exile arrived in Prague this week—along with file boxes stuffed full of treasured keepsakes from those childhood days in perilous times. The former refugees came to donate their class photographs, report cards, school newspapers, diaries and other mementos to the Czech National Archives' collection.

Among these former Czechoslovak refugees sheltered and educated in Britain sixty years ago was a four-year-old boy named Edvard Outrata, the child of a prominent Czechoslovak official, who is today deputy speaker of the Czech Senate.

"My father was a minister in the government in exile... I don't really remember much about the way we got to Britain. I actually went their twice: once directly in '39 and then after the fall of France, when the national council, the leadership of the Czech resistance, went from Bordeaux to Britain—with me, of course; I was four years old at the time. And then they set up the government in exile, which eventually was recognised by Britain..."

Dozens of Czech schoolteachers, some of whom had tutored diplomats' children in France and Belgium, and as far away as Bulgaria and Yugoslavia, had fled to Britain as Hitler's armies invaded Europe. It was they who proposed to President Edvard Benes that a state school be established.

"The school was very good considering the circumstances. The teachers did an enormous amount of work—with hindsight, looking at it now—in making the substance, the curriculum and all that, fit into the patterns..." Sen Outrata says.

"They wrote much of the textbooks themselves. Of course they were teachers, so they remembered what the curricula were, by and large, and gave us the best education they could, so that my exams were recognised later in Czechoslovakia without further ado and I just continued [my studies] from where I had left off."

Sen Outrata, was the youngest alumnus on hand this week in Prague of the Czechoslovak State School in Britain, a boarding school at Hinton Hall, near Whitchurch in Shropshire, and one of the lucky few whose parents not only survived the war but also made it to Britain. 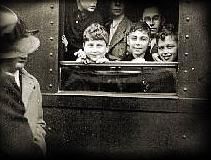 Sir Nicholas Winton's kindertransport Many who attended that state school, or the school for older Czech students established in Wales, were Jewish children who had fled their Nazi-occupied homeland on the special 'Kindertransport' trains organised by Sir Nicholas Winton, sometimes referred to as the "British Oscar Schindler". Most of these 669 children never saw their parents again.

"I was one of Winton's children--on the children's transport, yes, on the 18th of July, 1939. And I stayed nearly the whole war in Stoke-on-Trent, Staffordshire. It was a special thing there because there was a street—a whole street—where children without parents lived."

Hana Franklova lived in a council house in Staffordshire with seven other Czech refugees, who were to be orphaned. For the duration of the war, each child was sponsored by a local English school or business. 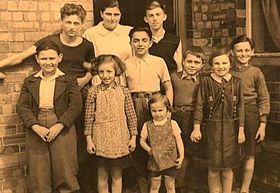 "They sent money, so that we could have clothing and food and so on... I went to the English schools in Stoke-on-Trent and then to Abernant in Wales around Easter 1944. I was there only one and a quarter year and then I returned home to Prague."

Mr Horak brought along his wartime scrapbook to the Czech National Archive on Wednesday. He is not yet ready to part with it, and finds it rather difficult to speak about how much the school still means to him. But he was eager to show his photos to his former classmates.

"Here is the Czech school in England... There's Mrs Hana Benesova [the president's wife]... Here is Mr Capek... Here is one class...and... here is my father and me."

RP: And what do you remember from that time?

"I was a bit cuter then than I am now. I was a little boy—there's a picture here...and I do look cute! I'm totally blond and I'm sitting on the knees of some teacher, obviously..." says Petr Loubel, who has found a picture of himself among the archives.

The yellowing photograph unleashes a flood of memories. His father had "punched out" a German soldier and fled to France with an arrest warrant—and almost certain death sentence—hanging over his head. Petr went with him, but his mother, although long divorced from Mr Loubel, was summoned to appear before the Gestapo. She committed suicide rather than face interrogation by the Nazis. Petr eventually landed in England.

"Various groups started forming that took in children. One was an Anglican group, associated with the church, and they took me and two Polish in. Very nice people; they fed us well. We had to pray, say grace before each meal, go to church on Sundays... I guess it didn't hurt me. I was put in an English school but didn't understand a word. I remember the milk bottles with a little bit of cream on top...But then the bombing of London started, and a 500-pound bomb fell into the yard..."

By that time, the Czechoslovak schools were operating and Petr was sent to the one in Surrey. He then went on to Hinton Hall in Shropshire, and from there on to Wales with the older children. 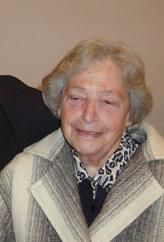 School in exile nurse Eva Krusinova Having fled Czechoslovakia shortly after finishing high school, Eva Krusinova, now 86, was scarcely older than many of the students she cared for as an assistant nurse. Her father and mother perished in a Nazi concentration camp; her younger brother miraculously survived internment. The children became like family, Mrs Krusinova says.

"First of all, we were in one bunch—the little ones and the big ones. I mean, there were 'children' who were eighteen; they were as old as I was, and then there were children who weren't even six. We were in one school, really, but later on they divided the school between the little ones, who moved away a little bit, from our place, and I just had the big girls and boys., but especially boys, I had. I had to look after! They were very good, you know, because they realised that we represented ... their parents." Sir Nicholas Winton, Lady Milena Grenfell-Baines and Canadian journalist Joe Schlesinger, photo: CTK Lady Milena Grenfell-Baines, was nine years old when she and her three-year-old sister boarded the last of the eight Kindertransport trains. A ninth train, tragically, the one carrying the most children, 250—never left the station on September 3, the day that the Second World War broke out.

"I was one of the Winton children that came on the train in 1939; in this room with me, there are probably three or four of them. Eventually, in 1942, I was sent to the Czech school. It's a long story: my father escaped through different means and my mother got out in 1940—I was one of the few who were lucky enough to have parents in England."

It was Lady Grenfell-Baines' father, Rudolf Fleischmann, who the German writer Thomas Mann has to thank for helping him gain Czech citizenship, which allowed Mann, eventually, to escape to the United States. Whatever their circumstances, and despite the backdrop of war, children still found time to be children, says Lady Grenfell-Baines--who, by her own admission, wasn't always the most conscientious of students.

"I was a terrible pupil and in the Czech schools they had a habit that if you didn't pass your exams you sat through the same class twice, and I was one of the few that was the exception [laughs]. It was Latin class, I was being very naughty, and the teacher sent me to stand behind the blackboard and all of a sudden, I started tap dancing—which amused the entire class, which enraged the Latin teacher, who then, sort of, entered my name into the 'black book' of the school."

RP: And the story you've just told is mentioned in a book that has just been donated to the archives...

"Yes - this was minutely described in a diary that one of our school friends sent from New York. It really is a very detailed day-by-day story of life at the school. I mean, she talks about going shopping, washing her hair, not going to the school dances—because she was a bitterly shy girl—mending socks, who was in trouble, who fell in love with whom, should she write a letter to the boy that she fancied. And he's actually here this afternoon! He doesn't know—so there you are! Every one of them has a story to tell..."