Selling the concept of agro-tourism to a nation of country cottage lovers who spend most of their weekends in the country is not an easy task, but slowly it is taking root. A growing number of farms in the Czech Republic are now offering more than just a weekend in the country. They entice visitors with home-made food from their own farm products, horse-riding, making home-made cheese, butter or bread, milking cows, feeding goats and a wide variety of other activities that urban dwellers are no longer familiar with. 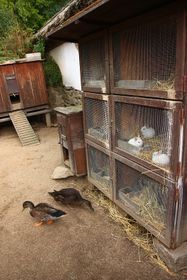 Photo: Štěpánka Budková In the years of the First Czechoslovak Republic city dwellers would spend time in the country, and during the forty years of communism people’s country cottages provided the only means of mental escape and inspiration and moreover with travel abroad extremely limited Czechs knew their own country like the back of their hand. After the 1989 Velvet Revolution Czechs wanted to see the world and make up for the time lost, and it was hard to entice them with the idea of a weekend at a farm. Karel Havlíček, the head of the Association of Small and Mid-Sized Entrepreneurs, says the situation is now slowly changing for the better.

“Our estimate is that there are between 500 and 700 farms in the Czech Republic offering some form of agro-tourism. It is true that they still tend to rely more on foreign visitors than Czech clients.”

Czech farms are popular with German, Austrian and Dutch visitors, but after 40 years of collective farming there were many drawbacks – the country lacked the necessary support network that makes agro-tourism work: nature trails, romantic restaurants, bike rentals and a variety of other services.

As a result, Czech farmers cannot rely on agro-tourism as their sole source of income and simply provide it as an interesting side activity that may develop in time. The head of the Czech Association of Travel Agencies Jan Papež says the situation is incomparable to countries with developed agro-tourist industries.

“Our estimate is that there are between 500 and 700 farms in the Czech Republic offering some form of agro-tourism.”

“In Austria, France or New Zealand, agro-tourism is a very lucrative business. In South Africa it is on par with crop-farming or farming as such.”

Czech farmers who take up agro-tourism have a much harder time, but gradually the idea of spending a weekend at a farm is catching on. Schools from the big cities have started organizing day trips for children for whom a day on a farm is an exciting adventure and part of the learning process.

Families with children occasionally decide to spend a weekend on a farm as well and individual farms are focussing on popular hobbies and activities in order to attract certain groups of visitors, offering horse-riding where there are good trails for it, fishing in the country’s lake districts, giving visitors a basic course in pottery making, blacksmithing or home cooking. The extra value is beginning to show results.

Vladimír Kuncl is one of the pioneers of agro-tourism in the Czech Republic. Soon after the fall of communism his family set about restoring the family mill dating back to 1720 and setting up an organic farm on some 80 hectares of land 60 km south of Prague. His son is the fifth generation of Kuncls to farm the family land.

Almost immediately the family turned part of the mill into a guesthouse and started advertising its services. Vladimír Kuncl says there is plenty to see in the vicinity and the mill has never had a shortage of visitors.

Vladimír Kuncl, photo: archive of Vladimír Kuncl “When we started taking paying guests in 1990 there was interest mainly from foreign visitors, especially people from the Netherlands who took a great liking to the Czech countryside in the early 90s. I would say they made up two thirds of our clientele in the first few years. Now things have turned around. Czechs are gradually coming to like the idea of spending a few days on a farm and now I would say they make up around 80 percent of our visitors. And we now get fewer foreign clients.”

The farm has plenty to offer – the Kuncls are horse breeders and visitors can ride some of the farm’s horses, they have cattle, Cameroon sheep, and small animals such as rabbits, ducks, peacocks, and pigeons. Visitors are invited to try their hand at the traditional farming activities, they can fish in the nearby lake, go mushroom picking in the surrounding forests or visit the region’s tourist sites. The family takes in up to 12 house quests at a time and provides apartments with a kitchenette which lets them cook their own meals from the fresh farm produce on offer. Vladimir’s son Petr, who took over the management of the farm from his father in 2011, is an artist blacksmith and if visitors are interested he is happy to take them into his workshop and let them try their hand at the craft. I asked Vladimír Kuncl what he thinks is the main attraction that keeps visitors coming.

“Czechs are gradually coming to like the idea of spending a few days on a farm.”

“I think it is mainly the farm and everything around it. We get a lot of visitors from the big cities –families with small children who have not had an opportunity to experience life on a farm. Many of them have not even seen a horse or cow close up and we let them try their hand at everything, riding a horse, feeding the animals, looking for eggs in the hen-house, seeing how things are done. And we get more and more of them spending a week here with their parents or grandparents – so I think that is the biggest attraction –the farm life and the animals.”

Grown-ups find other attractions –at the dinner table. The Kuncl farm breeds Aberdeen Angus cattle producing organic, grass-fed beef for mouth-watering steaks which visitors can buy and enjoy during their stay there. Vladimír Kuncl says they often barbecue steaks out in the open, but the family would like to take things further.

“Our dream is to open a small restaurant here where we could cook our own steaks for visitors but that’s quite ambitious and we are not that far down the road yet. What we don’t want to do is expand the guest-house, because I think that it would spoil the atmosphere of the place, the peace and quiet that people come in search of. At present we have 10 to 12 visitors at a time and that seems to be an optimal number.”

The guest-house is full from early spring to late autumn and in the summer when the Kuncls organize summer camps for children it is packed. It now makes about 20 to 30 percent of the farm’s overall income. Looking back Vladimír Kuncl says that he does not regret the decision to get involved in agro-tourism. 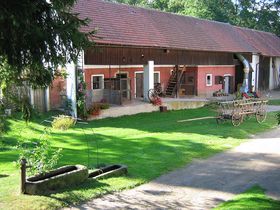 Kunclův mlýn, photo: archive of Vladimír Kuncl “I think it was a good decision because a farmer that limits his activity to one area or one produce could face serious problems if it is a bad year or prices on the market fall. We are trying to diversify as much as possible. So agro-tourism is just a small part of the big picture and I am glad to see people come and enjoy themselves here. We have regulars who keep coming back because they love it here – there’s one guest who has been here 46 times! I would say that a third of our visitors are regulars and two-thirds are newcomers.” 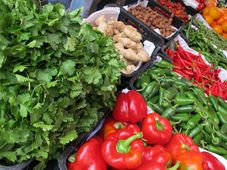 Organic products still a luxury for most Czechs

Organic food is still a luxury for most Czechs and although forty percent of people say they buy organic food items occasionally, organic… 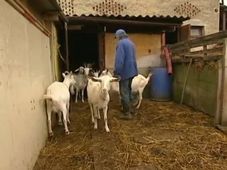 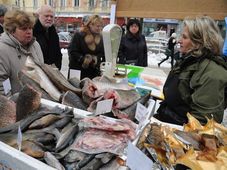 In this edition of Marketplace, we go to an actual outdoor market. We braved the cold Easter weather this past Saturday and visited…