A librettist's tale: Kafka's real-life 'Trial' and the nature of Josef K's 'crime'

Virtually unknown during his lifetime, the surreal works of Franz Kafka have become synonymous with the grotesque alienation of modern man in an unintelligible, hostile, or at best indifferent world. But as Brian Kenety has been finding out, "Kafkaesque" is not a term that does justice to the man himself, according to the authors of a new opera based on "The Trial," his most famous novel.

Franz Kafka, they say, was an absolute scream, a tortured yet comic genius whose dark humour has been buried under the weight of the artist's legacy. Drawing heavily on hundreds of his private letters, in "Kafka's Trial," librettist Paul Bentley and composer Poul Ruders have also put forth a compelling case to explain the true nature of the character Josef K.'s "crime."

Librettist Paul Bentley says he was just about ready to slit his wrists when composer Poul Ruders first told him that their second opera together -- a showcase piece for the inaugural season at the new home to the Royal Danish Theatre in Copenhagen -- was to be "The Trial". After all, Kafka was notorious for being depressing, dark and suicidal, traits which composers may find irresistible, but which makes life difficult for a librettist, whose task it is to conjure up likeable, or at least sympathetic, characters with whom audiences can connect.

"Well, I hadn't read Kafka since I was a student, some 35 years before, and I had this picture in my mind, as we all do in Britain, and possibly elsewhere, that he was deeply depressing; and I thought, do I really want to write a deeply depressing opera? The libretto for one, anyway..."

But Mr Bentley says that just a few short pages into his yellowing paperback copy of The Trial, untouched since his student days in the '60s, he first began to chuckle, and then to laugh out loud. His initial concerns, at least - that it would be all too depressing, even for opera - were starting to melt away: Kafka... was funny.

"... and it suddenly dawned on me that -- approached with an open mind -- he was actually a comic writer. Of course it's black humour, black comedy, there's no question about that, but it was funny. There's this famous quote by his biographer, his close friend, Max Brod, who says that when Kafka first read the opening chapter, the Arrest chapter, to his friends, they were all falling about laughing. So that was deeply encouraging. I thought, well at least it's funny - or at least some of it is funny."

Director of the opera, Francisco Negrin:

"Whenever you look at Kafka novels, and you see films based on Kafka, or plays based on Kafka, you always end up with this world of filing cabinets and offices and grey suits, and little bowler hats... and yes, that is very frightening, in a way: we all associate that with the idea of frightening bureaucracy. But when Kafka wrote these novels, he wanted then to be black humour."

"Of course there are lots of dark moments in this, but also there are some fantastic, crazy moments, and absurd moments. But I have to say, this is one of the heaviest scores I've ever had... and I think this is very much in the style of Kafka; you know, it's a humour which is never without a very large, dark shadow."

Darkly funny, but no less difficult to adapt: Librettist Paul Bentley's sense of foreboding at taking on the project remained, for not only was this opera to be based on a work by Kafka - the man who one morning noted in his diary that he'd experienced "for the first time in ages, the joy of imagining a knife twisted in my heart" - but it was to be adapted from an unfinished, fractured novel featuring no fewer than 18 important characters - some of whom we meet just once - and all of them rather disagreeable.

"And as I say, most of the characters were pretty unpleasant. And the most unpleasant of the lot was the leading man."

That's a problem, because opera audiences want to connect with the characters on stage: "the punters have to like the principals," says Mr Bentley.

Kafka started writing The Trial in the summer of 1914, shortly after the assassination of Archduke Franz Ferdinand, as Europe was mobilising for war. He had earned a law degree and was employed at a workers' accident insurance agency at the time. In its most basic telling, The Trial is the tale of a bank clerk called Josef K, who is arrested on fine morning, goes to trial, and is later executed - all without knowing the charges against him.

But The Trial, like Kafka's other two novels, The Castle and Amerika, was unfinished: different publishers, starting with Kafka's close friend Max Brod, have organised the fragmented chapters of the novel in different ways. This has left the door wide open for interpretation.

"I did a lot of research. As I say, I had to read all of these letters, and there's about 500 pages, and I had to read around the subject because - something we haven't touched on so far is what on earth does it all mean? The meaning of the novel is something that scholars argue about forever, and it can mean all sorts of things. [Composer] Poul Ruders thinks it's about them up there, you know, the powers that be crushing the little man and so forth. I incline more to the fact that it's an allegory of the Fall of Man. Kafka was obsessed with the Garden of Eden, Adam and Eve and the fall, he wrote pages and pages about it."

The Austro-Hungarian empire had, in reaction to the revolutions of 1848, instituted a system of control that one critic described at the time as "a standing army of soldiers, a sitting army of officials, a kneeling army of priests, and a creeping army of informers"; ample material for Kafka to drawn upon, along with experience in the insurance firm, to present a surreal bureaucracy.

But some Kafka scholars have interpreted The Trial more as a quest for absolution, stemming from the concept of original sin - of which Josef K. was guilty, as are we all in this interpretation - that is to say, that The Trial is an allegory for the Fall of Man. In this way, it is possible to view the all-pervasive Court as his conscience, and to take what Josef K. thinks is being done to him as something he is in fact doing to himself.

But in searching for a way to make The Trial palatable for opera audiences, librettist Paul Bentley came across another explanation for the persecution of Josef K; the letters of Kafka had revealed his true "crime".

"It's going to be a strange hybrid between laughter and terror," says Composer Poul Rouders. "My librettist Paul Bentley and we decided — actually he decided, to include passages from Kafka's own love life with two ladies in particular, Felice Bauer and Grete Bloch, because it would enable me to compose a piece which was fifty percent slapstick and fifty percent, how shall I say it, ' Grand Guignol' - that is to say, melodramatic horror."

"I happened to go into a local bookshop and there were his letters to Felice Bauer, the Jewish girl he fell in love with and 'made love to' via letter over a period of two years, supplemented by his letters to her friend, with whom he also fell in love. And it became very much clearer in his letters that he was a complete nutcase -- I mean, he was a lunatic!"

Kafka had met Felice Bauer in Berlin in 1912. Over the next two years, he would exchange dozens and dozens of letters with her, some of them extremely intimate, if not classically romantic. Kafka twice became engaged to Felice, despite being wholly unattracted to her sexually.

Enter Grete Bloch, Felice's best friend, whom she sent over to Prague to sort Kafka out, and with whom he began an affair that went far beyond the exchange of letters. Wracked with guilt, he eventually confessed his unfaithfulness to Felice - in fact, the two women put Kafka "on trial" in a hotel room in Berlin, with his steamy letters to Grete providing the damning evidence they needed for a "conviction."

It was after his grilling in that Berlin hotel room that Kafka began writing The Trial. At the age of thirty, he again became engaged to Felice, yet wrote in his diary that in doing so, he felt "bound hand and foot, like a criminal."

The story of Kafka's real life trial at the hands of Felice Bauer and Greta Bloch, set against the narrative of the novel, says Paul Bentley, in part explains Josef K.'s mysterious attraction to the character "Fraulein Burstner."

"There's no doubt that the two girls turn up in the novel; there's no question of it. When you realise that Fraulein Burstner is Felice, his fiancée, who tore him to pieces at this trial, this pseudo 'trial' in the hotel room, and read damning extracts from his letters to the other girl and so forth, and that the pair of them destroyed him, then you realise why Josef K, on the way to the quarry, loses the will to live; because, you know, he [Kafka] was simply a broken man after that trial."

In interweaving these story lines of Fraulein Burstner and Felice Bauer, the problem of having characters that the opera audience could relate to was solved. Kafka's "double love affair" and tortured conscience made for good theatre; here were people with whom audiences could become emotionally involved. It would work as opera.

"Clearly Kafka himself was loveable, I mean, his friends loved him, and he had a very touching side, which came out right towards the end of his life. I think he found out he'd gotten pneumonia or something and he was going to die - of course, that was a huge weight off his mind - he could begin to enjoy himself, now that he knew definitely he was going to die, and how."

In fact, on learning that he had contracted tuberculosis, the acerbically witty Kafka quipped,"My head has made an appointment with my lungs behind my back."

"And [at that time] he met a little girl in the streets of Berlin - five years old, or something like that - who was crying, and he asked her why she was crying, and she it was because she'd lost her doll. And he said, 'You haven't lost your doll; she's gone on holiday.' And for the next weeks, Kafka wrote letters as from the doll to this little girl. Well, a man who can do that has a heart as big as all outdoors, as they say. So it was no wonder that his friends loved him, there's no wonder that his girlfriends loved him, despite all this maddening neuroticism and indecision. And that Kafka an audience could relate to; and that was the Kafka that I wanted to put on stage, and to weave his story, and the love story of the two girls, with the actual novel that was triggered by his story; the story of the love for the two girls."

The opera "Kafka's Trial" by librettist Paul Bentley and the Danish composer Poul Ruders, with whom Mr Bentley had collaborated on a production of The Handmaid's Tale, premiered at the new home to the Royal Danish Theatre last month. Danish public radio will air the opera on April 9 in its entirety on channel P2, at 20:00 Central European time. 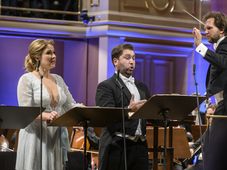