A new book of oral history, published by Academia, takes a look at the bygone communist era in the Czech Republic from the perspective of ordinary people, that is, those who didn’t have any political ambitions. Compiled by oral historian Miroslav Vaněk and his team, “Obyčejní Lidé…?!,” or “Ordinary People,” provides a fresh take on life under communism.

At 1800 pages, the three volume tome isn’t meant to be read in one sitting, but rather intended to provide a base for further study. What’s more, it has a most unusual title - “Obyčejní Lidé …?!,” is punctuated with three dots, a question mark, and exclamation mark and a comma. Mr.Vaněk explains why he chose to end the title of his book with such this unconventional punctuation. 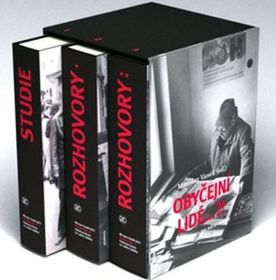 “We saw that the kind of people you would meet on the street weren’t really ordinary people, so that’s why there’s the question mark.

“And the exclamation mark is meant to show that we need to learn more about these people, especially here in the Czech Republic, where it seems like we forgot about these normal people in society, the people from the street. They accounted for about 98 percent of the population.”

Mr. Vaněk’s previous book was titled “Vítězové? Poražení?,” – Winners? Losers? It dealt with the remaining two percent of the population that belonged to either the communist elite or the dissident movement.

For “Ordinary People,” Mr. Vaněk interviewed subjects who were just that: ordinary people. They were the overwhelming majority of Czechs, which by his definition includes members of the working class as well as employees of the secret police. Why did he choose to interview them?

“We wanted to know how the people lived, if and what problems they had in this time, what being a worker, a teacher, a doctor meant. What it was like to be without political ambition and how society worked.

“We were very surprised, as historians, because we wanted to apply some of our data to it, some crucial points such as 1968, 1977 when the Charter 77 was signed, and 1989 of course.

“We wanted to ask the people if those big events influenced the ordinary peoples’ lives, but it was the complete opposite: They only talked about their personal lives, their family, their work, their hobbies, and that was much more interesting for them to talk about during the interviews.

“We got a more human perspective on their lives. I think it’s a very nice way to create a more colorful image of life during socialism.”

Instead of forcing interviewees to look at their lives through the lens of significant political events, the oral historian favored a more open approach, which he says produced more revealing material and even lead to new findings.

“The first interviews were always rather open. We had two or three sessions with everyone. The first session was a very open, autobiographical stories, the interviewee talking about themselves. After that, we evaluated the first interviews in our group and created new questions. Those weren’t just about politics, but it was questions about work, about education, friendships.

“We had some questions even before the project started, but after the first round of interviews we got a lot of new perspectives and questions. So we combined them with our old questions and in the second and third interviews, we asked those questions.

“The first were the questions that were important to us as historians, anthropologists, anthologists and so on. The second set of questions we received as a gift from the interviewees. They were totally new to us and I don’t think we could have come up with such good questions before the first interview. They were created through the interviews and it changed our perspective a bit. We understood better what was important to our interviewees, so we could analyze and interpret their stories much more deeply than we could have at the beginning.” 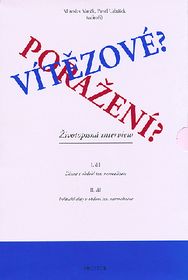 In one interview, a member of Mr. Vaněk’s team asked a former employee of a factory where medical instruments were manufactured, Alena Ekslerová, about her daily experience at work.

“I can’t really say what about my job made me happy, because I was… I could never sow, for example, and I never liked it, I was more the technical type, I can fix my own water faucet and such, from childhood, I had that in me and that’s why I liked my job, and most of all, it paid me.”

Like Alena Ekslerová, Václav Jelínek was interviewed for the book.

“At the time, traveling, especially to the West was very difficult. All trips had to be approved by the regional committee of the Communist Party.”

Often, oral history is described as a look at history from below, as opposed to from above. So what can we gain from reading these interviews with ordinary people, and how can they shed light on the larger historical context?

“It’s quite funny, this oral history, because it’s not just about the truth, it’s about human imagination and what the people want it to be like, not what they actually did, but how they’d like to be seen.

“A lot of people lie about their past. Every year around November 17, a lot of people are interviewed about their experience during the revolution, and claim to have been among the protesters on Wenceslas Square. It’s funny, because we as historians know that not as many were there as they claim to be. 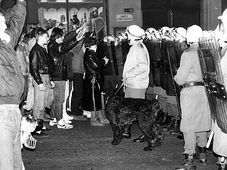 November 17 is the anniversary of the start of Czechoslovakia’s Velvet Revolution. But what is less well known is that six days earlier… 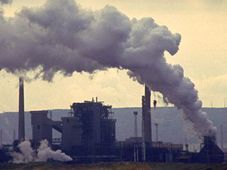 North Bohemia was once the member of a most unlucky club. Together with neighboring areas of Germany and Poland, the region was considered…

Taking a Closer Look at Former Political Elites and Dissidents