My guest for today’s One on One is violin virtuoso Václav Hudeček. Originally a child prodigy, Hudeček played London’s Royal Albert Hall when just fifteen years of age. In the 1960s, Hudeček became something of a violin-playing sex-symbol, selling out stadiums all over Czechoslovakia. In more recent years, he has set up a summer violin academy to encourage young talent in Luhačovice. He is currently touring the world as part of the Czech EU presidency, presenting Czech music and culture abroad. When I met him recently, I asked him how he got involved in this showcase of all things Czech:

“I found it very interesting, because it is not only music, but it is also literature, films and also paintings and sculptures. And all of this is under one name which is ‘Czech Velvet’ which evokes the Velvet Revolution a bit. I find it very nice, this name, because it says a lot and it says nothing as well. And because I am a violinist, myself, and because the violin is a very velvet instrument if you play it well and you have a good instrument, so I said yes. And we have already done one concert in Stockholm, which was very successful – a full house and a very enthusiastic audience. So, I was very happy.”

And what sort of Czech music will you be presenting to people? What did you play in Stockholm, and what will you be taking on this tour around the world?

“You know, to tell the truth, I don’t only want to present Czech music, because of course, for 10 million people we have done pretty well and we have quite a lot of choice in this area: Dvořák, Janáček, Smetana, Martinů and so on and so on. But because I think that our music, our composers like Dvořák, Janáček, Smetana and Martinů are really comparable with Beethoven, Brahms and all of these big names in the world of classical music, I think it is good to present Czech music alongside other composers. This way we can show that we are a country which is not as well known as say Britain or France, but that we may be small, but we are good.”

In terms of the way that the world looks at Czech music - just to go back to the Janáčeks, the Dvořáks, the Martinůs and so on - would you say that in recent years that has changed, and that nowadays Czech music has a higher profile internationally?

“You know, I think, unfortunately, that 20 years ago Czech music was much better known in the world, because for example, we have a lot of very good orchestras – we are sitting in Czech Radio – and I think that the Czech Radio Symphony Orchestra is in the best shape of all of these orchestras right now, but of course we have the Prague Symphony Orchestra, the Czech Philharmonic, the Prague Chamber Philharmonic. And our orchestras were so in demand 40 years ago, and in the last 20 years they haven’t been. And so I think something happened. Classical music is now not so well advertised, Czech TV almost doesn’t broadcast classical music, when 20 years ago we had classical music programmes on TV every week for two hours on channel one. And I think they were watched by almost 2 million people sometimes.”

You are saying that the situation is not so good in the Czech Republic right now in terms of classical music appreciation, but it seems extraordinary to me the situation around 30 years ago. I heard that you sold more tickets to your concerts than Waldemar Matuška, who was a massive Czech pop singer. That sounds a rather amazing situation you found yourself in throughout the 1970s – you were something like a classical music pin-up. Can you tell me a bit about that?

“It was funny, because once I came to České Budějovice and the concert organizer said ‘thanks to your concert I can fund one by Waldemar Matuška’ – because we earned so much money, because the fees we got were nothing in communist times, we played for something like 500-600 crowns a concert, you know. And of course if you had a hall with 1000-1500 people full, sold-out, and usually we did two or three concerts in each place. So they got back many times more than they paid for us.

“So it was very funny, and it only explains why I am so disappointed now, because it is possible to have a star in classical music who can sell out more concerts than a rock star. But nowadays you have to hit the media somehow. I have one colleague who plays a stone violin, another plays with a handkerchief on his head. But we have much better musicians, for example cellists, pianists, and the media are not interested in them.

“When I was young, the media was much more interested in real art and in good things, and so in this respect I am a little bit disappointed.”

But I have to ask you – in the 1970s, you did have the chance to live something like a rockstar – did you go about trashing hotel rooms, going to parties – was it all sex and drugs and rock and roll and violin? 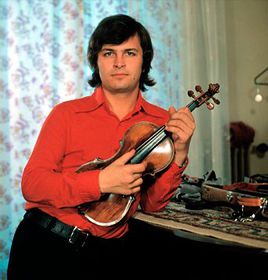 Václav Hudeček in 1974, photo: CTK “You know, if you play violin, violin is a very difficult instrument. You cannot, if you want to play Brahms’ violin concerto, Tchaikovsky’s violin concerto, very beautifully, you have to practice, you know. Not all day long, but five, six seven hours a day. And of course, you have no time to party.

“We had parties too when I had free time, and I had girlfriends, of course, if you are a healthy man, you are doing the same was what all other people of your age are doing, but drugs never.”

Finally, I know that every summer you do a violin academy for promising young violinists in Luhačovice. You’ve said previously that you are fascinated by the pursuit of talent. I wanted to ask you about what talent looked like, when you see it, when you hear it?

“You know, it is an experience, if you heard a lot of young musicians playing violin. Some of them are – you know, it is like zirconia and real diamond. Zirconia, if you have no comparison with real diamond, it may look like a wonderful, beautiful stone – it is a wonderful, beautiful stone – but, if you have a real diamond next to it, then you say ‘okay, there is really a big difference’. And if you listen to someone who just plays violin, you say ‘okay, he is talented, he is 12 -13 years old, but he’s quite good’. But then along comes somebody and they are like a diamond. And if you are a musician yourself, and if you are a violinist yourself and you hear a really big talent, you hear just five, six bars and you know ‘oh! That’s him, that’s her’. And it is like a really good wine, you have just a little taste and you don’t want to drink anything else!” 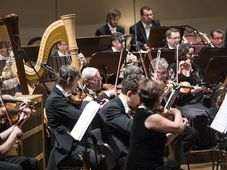 Impacted like so many others by coronavirus-related restrictions, the Prague Radio Symphony Orchestra has found a new way to reach…