The Václav Havel Library in Prague follows the US presidential library model in gathering and archiving materials relating to the late Czech dissident turned head of state. In the US, Havel’s legacy is promoted by sister organisation the Václav Havel Library Foundation, which is based at the Bohemian National Hall in New York. The latter is headed by Pavla Niklová, a former director of the city’s Czech Center. When we met, Niklová explained the relationship between the foundation and the library itself. 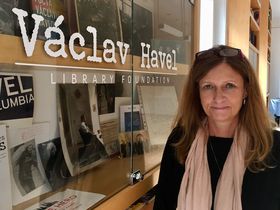 Pavla Niklová, photo: Ian Willoughby “The relationship is very close. People from the Library are on our board and vice versa.

“We share archival material. We promote their archive on our website and we are trying to add some things from America.

“Of course, the Havel Library is the main institution that covers Václav Havel.

“I read somewhere that they are the number one non-profit in the Czech Republic, in terms of the influence that they definitely have in the sphere of human rights and other areas.

“We are their little brother or little sister. We try to work on some things together and try to promote Havel’s legacy here in North America.”

When you speak about the archive, what kind of materials are you gathering here in the States related to Václav Havel?

“It’s more of a sharing of materials online. We have established partnerships with several presidential libraries and universities and media – and we share information about Václav Havel on our website.

“The idea is basically that if people try to look for information about Václav Havel they may get to the website of the Havel Library directly, or if they get to our website they can read some extra articles about Havel and then there’s a link for the Prague archive.”

And I guess you guys have more stuff in English?

“Yes, we only have stuff in English.”

Are you, like, gathering all newspaper interviews or books? What exactly is it?

“A big project that we launched is called Havel Conversations. These are interviews with important Americans in the fields of politics, culture and academia.”

“Everything is only online. We don’t have a physical archive here.

“I mean, we do have one little book shelf that is dedicated to Václav Havel, but our aim is not to build up a substantial physical archive here.”

Do you have any interesting ongoing projects?

“There are a few of them. Maybe I would start with theatre.

“One of them is a fellowship for theatre students from the Prague theatre academy, from DAMU.

“Every year DAMU announces a contest for students to write a mini drama based on one of Havel’s plays or themes or quotes.

“Then their jury selects one student, who comes to New York.

“The other big theatre project is the festival Rehearsal for Truth. It’s a showcase of Central European theatre, but it’s also possible that next year we will enlarge it and that the focus doesn’t only have to be Central European.

“I would like to collaborate with the French, because they have a festival at the same time, so I hope for some more work there.

“Another annual project is our award for a courageous writer at risk, called Disturbing the Peace.

“And another big project that we launched is called Havel Conversations. These are interviews with important Americans in the fields of politics, culture, academia.

“For the initial 10 interviews we got a very nice grant from the Carnegie Corporation. 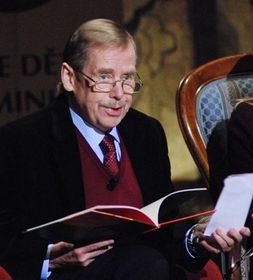 Were these live interviews in front on stage that people could attend, or were they private?

“Those first 10 interviews were private. But the purpose of them is to be used by students, politicians, human rights activists.

“They are housed at Florida International University and in the summer they became part of the Digital Public Library of America platform.

“That’s very important for us, we are very proud of it, because it means that these interviews have become part of the American cultural heritage.

“But we have also started some live Havel Conversations and the first two that we did were with Gail Papp and Carol Racomora and with Wendy Leurs.”

Generally speaking, what’s your sense of how Havel is perceived in the US today?

“I think he is very much admired. I’ve been told many times that, for example, at the United Nations he’s been quoted together with Gandhi and Nelson Mandela as, like, the three human rights heroes of the twentieth century.

“Of course, so many things are happening around the world – whatever happened yesterday is already old news – so that’s our task and responsibility, to remind people of his ideas and to promote them, because they are very much valid.”

I was reading something written by the head of the Václav Havel Library in Prague, Michael Žantovský, where he said that in the last few years they have been experiencing something new: the young people the Library is seeking to engage with don’t really know who Havel was, or even what communism was. And these are young Czechs.

“Of course the United States is a huge country, but two years ago for [the project] Havel@80 we prepared a fellowship for students called Fellowship for Human Rights.

“We advertised it through a special network at many American universities.

“I would say that there is a solid number of US students who are definitely interested in his writings and feel they are very important for their studies.”

“The task was to write an essay based on The Power of the Powerless and what makes it valid for today’s world.

“We received something like 50 or 60 essays from different universities, really from all parts of the US.

“So in one way, in the US there are so many people and it’s a huge country and many people don’t know that the Czech Republic exists or that Václav Havel lived.

“But, on the other hand, I would say that there is a solid number of students who are definitely interested in his writings and feel they are very important for their studies and for understanding what was going on in the 20th century in the eastern part of Europe.”

Do you think his story is relatively easy to understand for American students? He was a playwright who became a politician and didn’t have any scandals or really do anything wrong, from many people’s perspective.

“I think they are still excited to find out that something like that is possible.

“I think he is a hero and a model that people admire.”

Did you know Havel?

“I knew him. I met him a few times, but I can’t say we were friends.

“First I met him when I worked at the Soros Center in Prague and he asked us to prepare an exhibition for the hospital in Střešovice, where he was hospitalised. 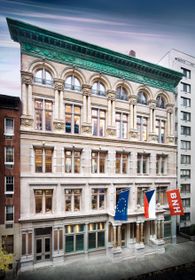 Bohemian National Hall, photo: Marián Beneš / Czech Centre in New York “He said there was nothing on the walls, so we prepared an exhibition of contemporary artists.

“The last time was when he was sitting behind me at the Archa theatre, when his last play Leaving was on.

“He was laughing so much that he was kicking my back, because he was right behind me.

“And when I was here at the Czech Center we were showing Citizen Havel, the documentary, and he was supposed to come.

“Unfortunately, that morning they called me and told me that Michael Douglas was throwing a party and Havel was going there.

“I tried to suggest that they bring Michael Douglas too. But they told me the dinner was for 50 or 100 people, so it didn’t happen.

“So I was sorry and he was sorry, because he didn’t see the Bohemian National Hall.

“He had been here when it was still under reconstruction and he was looking forward to seeing what it looked like when it was reopened, but that unfortunately didn’t happen.”

When you were around him, what impression did he make on you at the personal level?

“Very nice, and something that in Czech I would call ‘normal’.

“He just behaved in a normal way. I didn’t feel any pretension. He wasn’t snobbish.

“He enjoyed talking to people. He was ready to react quickly to changing situations.

“So it was a pure pleasure to be around him.”

Also I guess he was a great admirer of America. Would you say that’s a fair comment?

“Yes, I think so. I think he in a way idealised it a little bit.

“Václav Havel was laughing so much during Leaving that he was kicking my back, because he was right behind me.”

“He came here for the first time in the spring of 1968, when his play The Memorandum had a premiere at the Public Theater.

“Of course, it was a revolutionary time, and he spent around a month here.

“He met with many writers and intellectuals and people like [actor] George Voskovec, who lived here, so Czech people who lived here.

“I think it was very important for the following years when he could not travel.

“He managed during that time to establish some friendships that helped him to get through those 20 years.”