Tomas Sedlacek - European Union now means "Us" not "Them"

Rob Cameron's guest on this week's One on One is Tomas Sedlacek, a former economic adviser to President Vaclav Havel. Tomas was heavily involved in the recent EU referendum campaign, and is a committed fan of European integration. He says it's high time Czechs started referring to Europeans as "us" rather than "them", and to stop being afraid of a closer, more united Europe.

Tomas - your first job was economic adviser to President Havel, a job you got as soon as you finished university. How on earth did that come about?

"It happened just a couple of months after I graduated - it was a very funny story. The head of the political department at the Office of the President, Pavel Fiser, called and offered me a job, saying they were looking for a new economic advisor. At first I thought he was calling from the Fischer travel agency! Fischer is a well-known travel agency here in the Czech Republic. So I said 'I'm quite busy, I don't know whether this is really my cup of coffee'. And he called again and said 'You should re-evaluate - this is President Havel.' Of course I turned on my heel and said that's an offer one doesn't refuse. He called me again and said 'where can we meet?' So I started giving him dates - tomorrow, next week etc. And he said 'What about 15 minutes?' So we met in 15 minutes, I ran home and took a tie, did the interview, and that's how it started."

"Well I'm very grateful to God really for having the opportunity to work with the last philosopher president or leader in the world who is not a professional lawyer, economist or politician. My impression of working with him was that he managed to keep a rare thing: he managed to remain a very, very kind and humble human being. It was wonderful to work with him because he was always very relaxed. Of course the first time I met him I was a little bit nervous, but the nervousness fell off after a few words. He's a very pleasant guy. He's one of the few politicians that one actually feels very comfortable around, a pleasant person that you would like to go and have a beer with."

Did you ever go and have a beer with him? Did you consider him a friend? Or was he simply your boss?

"I respect him more as 'Vaclav Havel' than as 'a President' and I still do today. I don't know if I can go as far as to say that we're friends, but we have been for a beer, and today I'm working with other people on building a 'Vaclav Havel presidential library' so we do meet, we do see each other, and I'm very happy that we can co-operate with him now that he's not burdened with all the presidential duties and he can be himself."

"I don't know! I try to make myself understood. I learnt my English in Denmark at a British Catholic school, but I picked up an American accent, as you probably all hear. How I caught it, how I found it, I do not know. But usually I don't have any problems communicating with people."

So you lived abroad - what did that experience give you do you think?

"Living abroad makes you realise your own culture. Unless you live without you'll never notice it. Fish never notice there's such a thing as water until they're on dry land for a couple of minutes. So one realises how Czechs are. One realises that what we take for granted isn't for granted, and it gives one a broader perspective, perhaps a more tolerant approach towards other ways of doing the same thing."

You're quite young, do you ever feel intimidated working with much older people, such as President Havel?

"Definitely. Definitely I do. When they offered me the job [at the Castle], I asked them 'Are you sure you don't have anybody older or more experienced or both?' The reply I got I guess is quite typical for this country: because of 40 years of Communism, a lot of young people hold quite responsible posts. And rather than having an experienced older man who was educated in the old ways, when education was unfortunately in the dictate of the Communist regime, they wanted someone who, although inexperienced, had some basic understanding of how the economy functions. So definitely I do feel intimidated, but on the other hand I feel it's a stigma of our age here in the Czech Republic."

You were heavily involved in the "YES for Europe" campaign, which was an organisation trying to drum up support for membership of the European Union before the recent EU referendum. Why did you feel it important to become involved in that?

"The moment I really decided to go strongly into the pro-EU campaign was the moment I started hearing all these voices that were really against the EU, although they label themselves 'Euro-realists'. They were negative voices, which half the time were based on nationalistic fears and concerns that had nothing to with the real world. So it was a challenge to go and argue for the case and I hope that we contributed to making the discussion more than just a discussion about fear, how this European kolkhoz [Soviet-era agricultural co-operative] is going to consume this poor little country, which won't happen of course.

But don't you think that the Eurosceptics, or Eurorealists as they prefer to call themselves, were simply expressing the quite reasonable fears of many ordinary people towards EU membership?

"I guess that they were appealing to a certain subliminal fear of a nation that has always felt that other nations decide "about it without it". The Czech Republic or Czechoslovakia has always been seconding to big countries such as Germany, Russia or the Austro-Hungarian Empire. This is the first time in our history that we are willingly becoming part of something that we will have a decision-making power in - we will be an equal among equals. Of course there are fears connected with that, like there are fears with everything. It is a challenge. I'm not saying the European Union is a heaven on Earth, nobody says that. Communism was supposed to be heaven on Earth. This is real work, this is something that we're trying to do together as Europeans."

Mr Havel's successor Vaclav Klaus isn't quite as enthusiastic about the European Union as you are - he describes EU membership as marriage of convenience, not love. He's right isn't he? Why should we get all misty-eyed over something as unromantic as a hugely bureaucratic political and economic union?

"Well first of all in politics there is nothing like a marriage of love, and I don't know why he used such words because it makes no sense in real politics. Nobody ever said it would be a marriage of love - it's a marriage out of reason. It makes sense for us and it makes sense for them, and if it didn't make sense, then we shouldn't pursue it. To answer the other question: I'm not quite sure why he became president if he's not ready to lead the nation. He wasn't willing to say either "Yes" or "No" to the EU, and we still don't know which way he voted in the referendum. If he doesn't want to influence people, then he should have thought about that before he applied for the presidency."

I presume that you voted "Yes" in the referendum, as did 77 percent of the Czech population. Were you pleased by that result?

"I was very surprised and pleased. I was much more pessimistic - we spoke three days before the referendum, and I told you then that I was expecting a much worse turn-out. I'm proud of this nation, that we were unified across this nation, across political differences, age differences, income differences. Seventy-seven percent of these clusters voted "Yes". So I must say I'm more impressed by our nation than by our politicians." 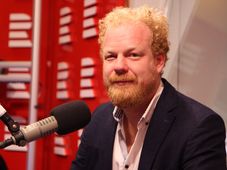