Our guest for One on One this week is Scottish artist Stewart Kenneth Moore who has been living in the Czech Republic since 1994. In that time, he has built up a reputation as one of the city’s most capable artists and draughtsmen, who is particularly well respected for the portraits he has done of many members of the city’s business community. Besides painting, Stewart also has a keen interest in graphic design and his illustrations have been used by a number of publications, including Esquire and Elle Magazine.

When we met up with Stewart at a Prague café recently, we started by asking him what first brought him to the Czech capital 13 years ago.

“When I was living in Glasgow, I became aware of Alfons Mucha. I was very interested in his work. I was aware of Jan Svankmajer at the same time.

“I was also very into alchemy back then. It’s interesting how all the madness and myths of alchemy actually fostered some of the great developments in chemistry.

“So I was interested in why that happened here. as well as other things. Then my girlfriend at the time, who is now my wife, came out to work here briefly. I came to visit her and just fell in love with the city.”

And are you still in love with the city to the same extent 13 years later? 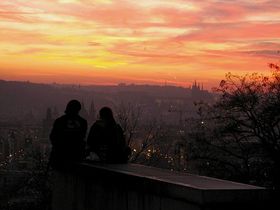 Prague “I’m still very much in love with the city actually. I don’t think you tire of a place like Prague really. There’s so much here.

“Of course, my initial interests, which brought me here, have been well satisfied. I don’t even think about these things now.

“But I find that the vibe of the city, which is really the thing that kept me here, is something I still like very much.”

Was it easy to establish yourself working as an artist here or did it take a long time?

“I don’t think it‘s very easy to establish yourself as a fine artist here if you are from the outside, because most galleries here are geared towards local artists. Or so it seems to me anyway.

“That’s fair enough. Most countries and cities are like that. But what I did find good for me was a sense of isolation as a visitor which I got here and which I couldn’t get anywhere else.

“That allowed me to focus on what I wanted to do – painting and an awful lot of illustration work too, because my principal goal is to make a living as an artist. I don’t want to do anything else.

“So I will do illustrations and various other things, but when I have a chance I work on paintings that are for me. And if people like them they can buy them.”

And what about the Czech milieu so to speak? Is it less or more conducive to encouraging art than other places like Britain or the US?

“I get the feeling that, if I were back home in Scotland or down in London or somewhere, it would be a bit more of a feeding frenzy for grants and various things.

“One thing about coming here was that there was no way I could apply for a grant or anything. So I had to just find a way to stand on my own two feet.”

You mentioned Alfons Mucha and Jan Svankmajer a minute ago. Are there any other Czech artists or cultural figures who have inspired or informed your work?

“If I was to pick someone, I’d say T.F. Simon. I really, really like his work. I think he’s someone who’s kind of ignored in a way, which is a great shame because he’s a brilliant artist of his period.”

And what is it about Simon that particularly appeals to you?

“His skill as a draughtsman and his use of colour. It’s a delightful thing to look at. I just like the freshness with which he looked at things, especially in America.

“When he was in Paris, there were a lot of people with similar skills to his who were painting the city, so you have a fair idea of what Paris looked like. This is a shame because after you’ve seen work by these people and then you see Simon’s pieces later on you feel as though you’ve seen stuff like that before.

“But when you see him doing America – going to New York and drawing the skyscrapers and stuff. That’s fascinating.

“I don’t want to suggest that that’s the only kind of artist I’m interested in. It’s just one type of art that attracts me.”¨

You do quite a lot of bespoke art such as portraits for members of Prague’s business community. Does this sort of work hamper your artistic freedom in any way?

“Most people aren’t very demanding in this respect. When they see your work and they like it, they then ask you to do something for them.

“They usually do this because they like what you are doing already. For instance one of the things I am interested in is portraiture.

“I really like to paint a portrait in a way that comes alive. There are various things you can concentrate on to make that happen. Every so often someone asks you to do a portrait. And I’m happy to do it.”

Do you like doing commissioned work? Is it something you view as a necessary evil or does the discipline of having to try and express yourself under certain constraints actually make the end product better?

“Commissioned work can actually be frowned upon by people in the fine art world, but all the great art that we know, all the stuff that started this fine art kick that we are still on was commissioned work. Take the Vatican, for instance, and stuff prior to that.

“It was always about representing the local gods or making the local officials look fantastic and that’s how these works came about.

“You know a funny thing about old sculptures in Greece is that we’ve come to know these sculptings as white marble faces that have no eyes or irises or anything. They’re just white things.

“And this has become like an example of a great work of art. But they recently studied the surface of these sculptures and they found that they had once been painted.

“But we don’t know for sure. Maybe they were painted quite beautifully and were very realistic. But can you imagine that – thinking of Athens and those old statues, and seeing them as fully nude figures in full colour?

“It would have been a whole different thing. But we’ve come to build our fine art on the idea that they were these very clinical white sculptures.

“I don’t quite know what I’m trying to say with that answer, but there you go…”

Well, it’s an interesting thought, at least. Besides your excursions into fine art and your work as an illustrator, you are also quite well known in this city as a cartoonist. You even had a comic strip in The Prague Post for a number of years. I presume this sort of work posed different challenges for you as an artist?

“But the challenge of a cartoon is that you don’t have four months to spend making it perfect. I would do things on a daily basis. I just had to get it done.

“Often I’d be doing it right up to the last minute on a deadline. And then I’d look at it a few weeks later and ask myself why I had done that.

“Or I’d do other things not knowing why I’d done them, and I’d end up really happy I had done them. So the cartoon is a really challenging form, especially if you want to do a good cartoon.”

Now that you’ve been in Prague for 13 years, can you see yourself ever leaving the place? 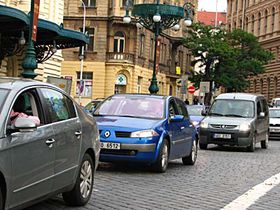 “I love being here and I’m close enough to everything that I need. All the major cities are within reach. If I’ve to go anywhere reasonably quickly, I can hop in my car and drive to Berlin or wherever. So I don’t really have a need to leave.

“The only thing that would chase me out of Prague is the drivers. The one gripe I have with this city is the way people drive.

”Czechs are very dangerous drivers. It’s a shame because they drive in a way that thez don’t seem to behave. They drive very aggressively and then when you meet them or you pass them on the street they don’t actually act like that.

“But god forbid if you ever step out on the road, you’re liable to get killed. I just wish people here would learn to drive better. It would be wonderful if they did.”

If you are interested in seeing Stewart Kenneth Moore’s work, you can visit his website at www.opipop.com For nearly ten years, the company Nanovo has been buying, renovating and re-selling design items from Czechoslovakia’s Communist era,… 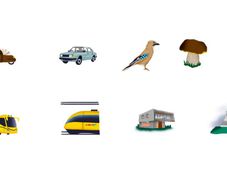 A Czech design student has come up with a custom set of 180 emojis that depict various aspects of Czech life and humour. Within a week…