Piotrek Gawlinski unearths and scans rare and frequently stunning pictures of the Czech capital for his excellent historical photoblog Lost and Found in Prague. A Polish tour guide based in the city, Gawlinski uses his Tumblr account to draw attention to work by greats such as Josef Sudek but also provides a unique forum for pictures by unknown photographers who captured a now disappeared Prague. 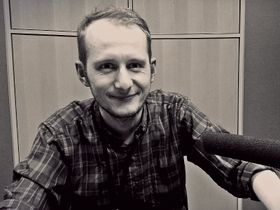 Piotrek Gawlinski, photo: Ian Willoughby When we spoke, Gawlinski explained the thinking behind Lost and Found in Prague, which started as an outlet for his own photos before turning into what it is today.

“It’s like when you’re looking for something, you’re going to find it. And when you’re just going through the city and you’re thinking about pictures, views, angles, suddenly you find things of which you’ve never been aware before. I mean books, photos.

“It’s not only in antique shops. Because people probably imagine that I’m going from one antique shop to another and I’ve got my route through Prague once a week, and that’s it.”

That’s what I expected.

“Sometimes you find it on your way. For example, on the street even, on the pavement, literally. Maybe an old book and inside something interesting. For example a photo, a graphic…”

“Or a postcard, an old postcard. And suddenly I realise it’s not only my content. Actually, there is zero percent my content. But there is Josef Sudek in it, there is Jaromír Funke in it. A lot of well-known and less known figures that I want to show to people.

“From the beginning it was like writing a diary – you’re writing just for yourself, but deep inside there’s a hope that someone’s going to find this one day and read it, and that it’s going to be a great experience for that person. And I guess it’s the same with Lost and Found in Prague right now.”

But I guess you must find most of your photos in antique shops or in books that you find in secondhand bookshops?

“Secondhand bookshops. But also on the bookshelves of my friends. It’s maybe 50 percent antique shops – but that’s only 50 percent. Otherwise it’s friends, family. Sometimes people send me photos, but actually I never use them because they’re not as great as I need.”

I could look at your website all day and I’ve spent a lot of time looking at the great photos on it. What do you think is the appeal of these old photographs of Prague? Why are people interested? Why are you interested? 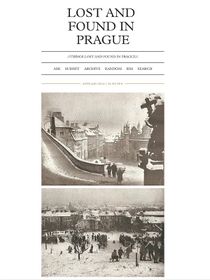 “That’s a tough question, actually. I’m still looking for something which is lost. The city is still great, and one of the greatest cities in Europe and the whole world.

“But something was definitely lost after the revolution. If you just look at the panorama of Prague from the ‘50s, that’s a different shot from right now on postcards.”

Now Prague is more commercial? Or more like other cities? What’s the difference?

“Each city is different from another. It’s all about the details, the spices that simply give us the unique genuine taste. And I guess, Prague still has those elements that are unique, definitely.

“But if you’re asking me about the commercial side of life here, it’s obvious. It’s obvious. When you speak to people, Czech people, who moved during communism to Western countries and then came back to Prague, they say the difference is huge.

“Even though the Communists weren’t the greatest when it came to preservation, but still there was that part which we can call the soul, the heart, something mystical… that part is missing in many, many places.

“Still, there is some kind of spirit inside. I guess that’s the main aim. It’s all about aesthetics.”

That’s what comes across in many of the photos – that Prague in those days was simpler, purer, there’s less visual noise.

“That’s a great phrase you used, visual noise. When you look at advertising for example, you have neon signs, which is one of the greatest examples of that part of life. Because we need to live with that, because there’s no other way, actually.

“When you just look at photos of Prague Castle from the ‘50s and ‘60s, there are actually no people in the courtyards. Right now we have a million people every year visiting Prague Castle.

“I’m not saying that this is good or bad. But that’s the difference those sites, the very same sites, 30, 40 years ago and nowadays.” 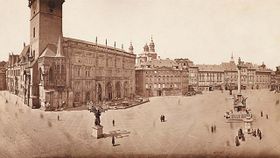 Are there any particular photographers whose work appeals to you especially? Or are there any periods of photography of the city that you’re interested in?

“It depends on mood or on the situation. Right now, definitely Ladislav Sitenský. Jaromír Funke. Josef Sudek, but Sudek is a genius, so he’s going to be on the list every time you ask me, on the podium, let’s say.

“And periods? ‘50s and ‘60s. Sometimes I also like photographs from the ‘80s. And even from the ‘70s! So all the decades between the second world war and the Velvet Revolution.

“What I find interesting in the ‘70s for example is the light and the colour in the shots. It’s something you can’t fake on Instagram, or whatever. You can use any kind of filter, but it’s not going to be the same. That’s why it’s hard to say which particular decade I love the most.”

What about the reaction of users of the site. Do you find that there are particular eras or particular photographers whose work is retweeted a lot or posted by other people?

“I guess black and white photography is reblogged more often. And sites with panoramas of the Castle and the Lesser Town – that perfect view of Prague like you can see on postcards on every corner.

“Charles Bridge, especially with cars on it, because until I guess 1964 there was traffic on Charles Bridge. So that I think is interesting…”

“Yes, sometimes. Like there was a nice photo from the archives of Prague Castle of a huge book with a tiny lady on it. That’s in some sense a curiosity. 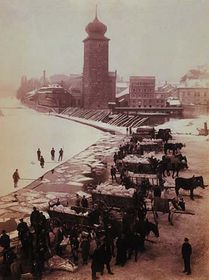 “But also, you know, photos with people. For example, under the Orloj astronomical clock in perfect shots by Marie Šechtlová, from the ‘60s.

“But mostly there is one certain element that people are going to reblog, and it’s black and what photography.” This May marks the centenary of the birth of Ladislav Sitenský, among the most celebrated Czech photographers of the 20th century.…