Pianist Antonin Kubalek: "Something happened there!"

Jan's guest in One on One is renowned Czech-Canadian pianist Antonin Kubalek, whose recordings and performances have captured audiences worldwide. In the 90s, Mr Kubalek returned for a series of triumphant performances in the Czech Republic, and continues to perform here regularly today. His recitals are most recommended, containing an incredible intensity; his repertoire includes Dvorak, Schubert, Smetana, and Brahms. But, how did Antonin Kubalek get involved in music? That was the first question I asked him when we met recently in downtown Toronto.

"Just after the war, in 1945, as a ten-year-old I found a pile of bazookas... and curiosity made me have a closer look and it just went off. I ended up with partially damaged sight, so I went to a special school in Prague, and at that school everybody was playing an instrument. So, I started playing the piano. Four years later I did an audition for the Prague Conservatory, and was accepted at the age of fifteen."

Do you recall the first moments you sat at the piano, did you feel some affinity, or is that something that just grows over years of training?

"Of course I picked the piano because I liked the sound, but I think the real decision came when I won a first year internal competition at the conservatory. For my reward I was given the opportunity to play in a concert at the Rudolfinium, the Dvorak Hall in Prague. And, I liked it {laughs}!"

Fair enough. Did nerves play a role at that time?

"Nerves?! Oh, you know, it's been so long ago I don't remember but I'm sure there were nerves because I still have nerves when I perform, even now! When you are fifteen you are not aware of all the dangers lurking around the corner - now I know - that there's always anything that can happen!"

How was music taught at that time?

"At the conservatory in Prague? Well, quite differently than how it's done here in Canada. Every teacher obviously had his own way of teaching. My first piano teacher, Otakar Heindl, who was blind, started me off and I think I owe him the most. I think the most important thing is to succeed to inspire the student to actually work, because it's very easy, especially when you are a young student in this bohemian lifestyle, that you'd rather spend it in the pub than at the piano, you know?"

But, of course it requires an amazing amount of dedication and constant practice...

"Well yes, you have to somehow manage, especially when you get to the point when you don't really get any better but it requires a lot of effort to just stay where you are, because it declines very quickly."

I imagine your taste evolves throughout your career that your affinity for certain composers must have changed from when you were fifteen starting out to today?

"All young musicians, they all want to play Beethoven and Chopin and Liszt. When you get older and acquire your own taste, so to speak, you start being a little more adventurous in picking your repertoire. In my case I would say that what was an important influence was a circle of friends I had that included mostly visual artists, painters, sculptors, as well as writers and poets. My visual art friends were always much more, how should I say it - rebellious - they started getting into abstract paintings and this and that, and they kept after me: 'why do you always play this Chopin - why don't you play some Shoenberg'!" 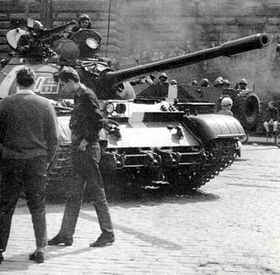 1968 That kind of leads into my next question on the Prague Spring, the famous period of economic and cultural reforms in the 60s, when censorship was lessened and there was a lot going on creatively in the arts. Do you recall the 60s with any fondness?

"Very much so, though I was not ever politically involved - even now I couldn't care less. The only reason why I left was more the need to expand my horizon, basically. Of course the fact that Warsaw Pact troops were occupying the streets of Prague didn't help. Or, I should say helped to make that decision. But, mostly it was because I had the opportunity to leave."

I'm assuming you didn't go back to Czechoslovakia until after the fall of communism...

"Correct. After twenty-three years, in 1991. The major performance was in Prague, in the Smetana Hall, which was emotionally very disturbing. You know, after twenty-three years that's a whole generation, and you don't know who will remember you, and who will come, and this and that. And it was a hall where I last played when I graduated! Sure enough half-an-hour before the concert there were no people! So, I sort of resigned myself to the situation and when the time came they shoved me out and the hall was packed! All just in half an hour, and it was a really, really satisfying moment for me."

They talk about your style as an "introverted approach"...

"It's difficult for me to analyse something like that because it's not intentional! It just happens! But, I know exactly what you are talking about: one reviewer noted that at the Prague Spring festival in 2002. And the piece I played was 'Things Lived and Dreamt', Josef Suk, a large cyclic work with a duration of about 40 minutes. And as you probably recall I had to stop in the middle because my piano bench started to be very noisy and I had to stop in the middle. There was one review which ran a headline saying that the piano bench broke underneath the pianist! Which was not the case, I'm not that heavy. It was just squeaky, you know."

That sort of brings us back to what you were saying at the beginning, that anything can happen, in this case a squeaky chair is probably the last thing that you want happening in the middle of a performance!

"Well, at least it has nothing to do with 'you'. It's much worse if something happens within your own interpretation, memory collapses, you get to the point where you have to actually have to stop playing and everybody notices! But, one of my teachers told me one very important advice: it happened once during a student recital at the conservatory, I had a minor problem in my performance which upset me, and when people were come to congratulate me I kept 'babbling' I'd made a mistake, you know {laughs}. And, he got very upset, my professor. He said 'Now everybody will know that you made a mistake!' Because for the interpreter your whole nervous system is like a tight-rope: every little thing to you feels ten times bigger than it really was. Ninety percent of the audience would have not noticed... if you hadn't mentioned anything. Somebody says 'something happened there' I always say 'Absolutely nothing happened!' {laughs}"

For more information about Antonin Kubalek and his recordings visit www.andrewkwanartists.com.

If you'd like to see Mr Kubalek in person he will be performing in the Czech Republic in late June and early July 2005. On July 1st he will give a recital as part of the International Chamber Music Festival in Cesky Krumlov. 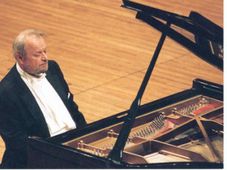 While for most of the year Prague concert halls offer dozens of concerts every week, in the summer months, when people leave for their…