Meet the maker of the Czech cronut – the crobliha

Inspired by the hit hybrid pastry the cronut, Lukáš Vašek’s bakery has brought it to the Czech Republic as the crobliha – and is constantly sold out. 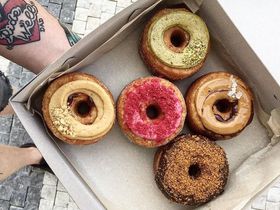 Photo: archive of Lukáš Vašek The cronut became a huge sensation when the croissant-doughnut hybrid was launched by New York’s Dominique Ansel Bakery four years ago. Now the popular pastry has arrived in Prague, where it has been dubbed the crobliha, with the second half of the word coming from kobliha, the Czech equivalent of the doughnut. Recently I caught up with the young man behind the crobliha, Lukáš Vašek. His Oh Deer Bakery, which opened in April, is rather small and at present unable to keep up with demand. Indeed, most days customers’ only hope of acquiring a crobliha is to order or come very early.

“The crobliha is a hybrid. It’s classic croissant dough but in the shape of a doughnut. And it’s fried.”

Have you ever been to the place in the US where they sell cronuts, in New York?

“No. I just tried one in London. Because Ansel opened in I think LA, New York, London and Tokyo.

“Before I opened, I went to London to try it. Because in New York the line was, like, for the whole day and I said, This is not for me.”

Is crobliha your translation of cronut?

“It’s not mine. The food blogger Cuketka was here, I don’t know, a month after we opened and he used the name crobliha in his blog.

“Ladies on Instagram come and take photos and then we never see them again.”

“Right now people don’t know whether to call it cronut or crobliha, but I think it doesn’t matter.”

Your bakery is called Oh Deer. There’s a big deer’s head on the wall beside us and your logo is of a man with a deer’s head. Why deer?

“And there was some guy, bigger than me, whose nickname was hippopotamus. I called him hippo and he grabbed me and started yelling, You’re a deer, deer, deer! 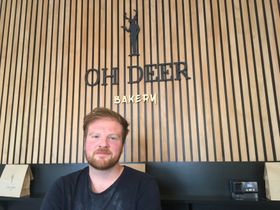 What different kinds of croblihas or cronuts do you sell?

“Right now I have five, though I want more.

“I started with two. Peanut butter jelly – it was my favourite and still is. And raspberry with lemon curd.

“After that I thought, I’ve got two – I need more. And I woke up one day and said, I’ll try this one. It’s caramel cream, with caramel, Nutella and Lotus biscuit.

“Later I added some others: pistachio with raspberry marmalade and salty caramel with Nutella. That’s it.”

Is there any real difference between your croblihas or cronuts and the original cronut?

“Yes, I think there are many differences. Mine is a little bit higher.

“We have different flour, so mine is more crispy I think. But it’s more wet inside, and a little bit more fluffy than the original from Ansel.”

“In the Czech Republic everybody is crazy about doughnuts and I’m on that wave right now.”

What are your biggest sellers?

We’re here at noon and your shelves are empty? Is it always sold out here? I follow you on Facebook and you seem to be permanently sold out.

“For the first two months I was just sitting and waiting for customers. But right now, after being in magazines like Forbes and Appetit, it’s going better and better.” 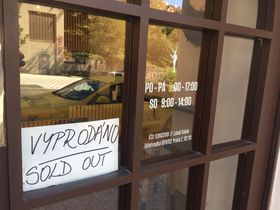 This is a common sight at Oh Deer, photo: Ian Willoughby What are your plans for the future? Because it seems unsustainable, or maybe just a bad business model, to sell out every day so early.

“Right now I’m trying to find a new kitchen. It’s necessary because mine is too small – just 10 square metres, I think.

“So I’m trying to find just a kitchen. It’ll be much better for me because production will be two, maybe three, times greater than right now.”

Frankly a business like this looks to me like the typical example of gentrification. It’s a place for hipsters, it’s cool, the design is very nice. How have local people here on the street reacted to you?

You don’t get any old ladies coming in looking for Šumava bread?

“[Laughs]. Yes, that happened at the start. Because there’s a bakery called Praktika around 20 metres away.

“One lady told me, It’s fried, it’s full of butter – those are the best things!”

Do you know what a Labradoodle is? It’s a cross between a Labrador and a poodle, and when people here about it they like it, they think it’s cute. But maybe if you really think about, it’s not so cute. I also wonder about the crobliha – I can imagine somebody coming here once because the idea sounds fun, but then maybe not coming again. Do you get many repeat customers?

“I think we have many, right now.

“But we also have many customers like you described.

“Ladies on Instagram come and take photos and then we never see them again.”

Does that really happen? 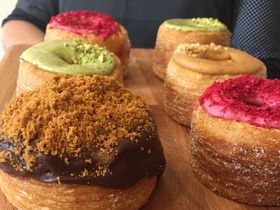 Photo: archive of Lukáš Vašek “Yes. I think many times per week.”

One thing I didn’t ask you earlier – why do you think the crobliha, or the cronut, is so popular? There are queues in New York. You guys are sold out very often.

“I think it’s… right now it’s a time when doughnuts are in.

“This [the crobliha] is almost the same, but a bit different. I’m 100 percent sure that it’s much better.

“I’m in this situation in the Czech Republic – everybody is crazy about doughnuts and I’m on that wave right now.”

What is about the taste that people like? I like croissants, but I hate doughnuts. I don’t see what the attraction of the taste is.

“Right now I don’t either [laughs]. I don’t like it right now! If you fry it every day…”

You’re sick of it?

“Yes. I don’t eat them. I just cut one per day, because I want to try the taste.

“But it’s empty, without cream or anything else. 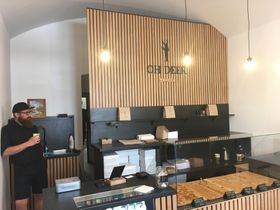 Oh Deer's shelf is bare at noon, photo: Ian Willoughby “One lady told me, It’s fried, it’s full of butter – those are the best things!

“Like I said, I don’t know what people like about the crobliha, but maybe it’s the filling, inside, and the topping.

“If I don’t count Boston cream, doughnuts just have icing on the top but are without filling.

“So I think it’s that – and the butter. In the Czech Republic we love butter and the crobliha is full of butter.”

They must be filling. How many can people eat? I guess two must be about the most you could eat.

“Yes. I think one is enough.

“But two crossfit ladies were here and started with one.

Were they unusually large ladies? 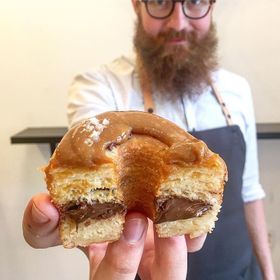 Photo: archive of Lukáš Vašek “No, they were from a crossfit centre – a fitness centre. They had, like, 30 kilos.”

Maybe they can afford to – they can work out for an extra hour.

“I think it was about ‘cheat day’, which is so popular right now. Everybody is using the hashtag ‘cheat day’ on Instagram.

What is cheat day?

So it’s one day where you allow yourself not to be disciplined?

“Yes, you eat just junk food. And the crobliha is junk food.”

Sofia Smith is a British-born chef of Irish-Malaysian heritage, who has been living in Prague since the late nineties. She started…