Since it was first created in 2001, the Czech and Slovak Film Database, or CSFD, has gained a massive following in the Czech Republic and Slovakia. The largest such website of its kind, it has nearly a quarter of a million entries on films, TV series, actors, directors and so on. A huge community has emerged around the website, with over 220,000 users. In this edition of One on One, we talk to Martin Pomothy, the creator and manager of the database.

Martin Pomothy “I have always been interested in movies themselves, and I have also been interested in opinions on movies. Even when I was eight years old, I had some papers with columns with the names of films where I put the ratings by my friends and family. I was always interested in which movies were rated best by them. So these were the origins of the idea.”

“It still is a hobby, and I hope will always be. But nowadays I actually look for different experience in business, not in movies, because I want to keep CSFD and all around it only as a hobby. That’s why I’m trying to find ways of making business in real estate for instance, and things like that.”

What do you think has been the key to the success of the database? What made it so popular?

“I think that people see and feel that the database is not just some commercial project, set up by some big company that wants to get money out of it. I think people can see that it is done not just by me, but many people who write reviews, who put up their profiles there, so you feel some spirit there, a spirit of movie fans. It’s not just a box with information about the films.” 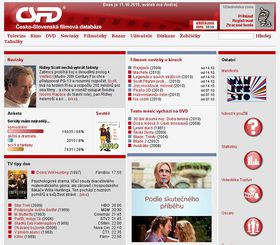 www.csfd.cz Giving users the opportunity to write their own film reviews must be a great catch for people. But on the other hand – are you concerned about the quality of what people write there?

“Of course. The quality of information is in the first place at CSFD. But we have system, you know. Not everybody can write everything. The source of these user rights to write this and not to write that has a structure; it’s set up in a way that makes it difficult to put up some wrong information that no one else would notice and would not immediately delete.”

Do you think that part of the success is also due to all the features you offer? People can rent movies, they can download them; they can set up their own personalized databases. Would CSFD be a success even without these features?

“There are features like that, but they are not the heart of the database. The heart is in connecting people who love films, allowing them to talk about films, rate them, build their own profiles to tell others which movies they like and which they have at home, which films they want to see this year, and so on. It’s all about community, and these features like downloading movies or buying DVDs – we have it there, but it’s not the heart of the database.”

Unlike some other film databases, the ČSFD does not provide some details, notably the detailed cast and crew listings. Do you think that’s a problem? 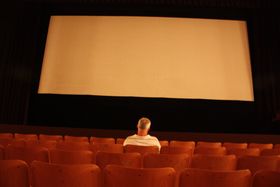 Photo: archive of Radio Prague “We may be missing some things and we are planning to include them, but we don’t want to include everything. That’s not the priority. There are many features we don’t need to be successful and to be a good database. There is a lot of information that only a few professionals look for, and we are more about fans, about normal people who just want to know which of the films that are playing on TV are good, an which are not. That’s the main purpose.”

Sure, but people cannot learn for instance who the author of music is in a film, which in some cases is very interesting. Do you think that’s something that should be there?

“Yes, and it will be added. It was supposed to there already but it has not happened yet.”

You are Slovak by origin. Is that the reason why you put Czech and Slovak films together in your database?

“That’s the question. I think it just happened. I am Slovak, I lived there until I was 22, and then I came to Prague where I feel at home. I feel good here, I like Prague. But I still have family in Slovakia, there are film buffs there – not as many as in the Czech Republic, but still – so I thought, why not? I known people in the industry there, distributors, I know the market there, so why not connect it?”

Do you know how many Czechs use you website compared to Slovaks?

“About 15 percent of users are Slovak. When you consider that there are around ten million Czechs and five million Slovaks, there are a lot less film fans in Slovakia than in the Czech Republic, which I think is sad. People in Slovakia are not that much interested in films.”

Why do you think that is?

“It’s their nature. It’s where you live, and what attitudes you have. It’s all about the mentality.”

Would you ever consider launching and English-language version of the database?

“Sorry but I don’t talk about my plans.”

But do you think there is a niche in the market as not such database specializes in Czech and Slovak films?

“Well, perhaps there is none yet.”

CSFD has several competitors – the FDb, the Czech Film Heaven – would you ever think of merging with them?

“No way. It would lower the quality of CSFD.”

Do you ever get under pressure from distributors or film producers to include or leave out some information about their films? Do they approach you about such things? 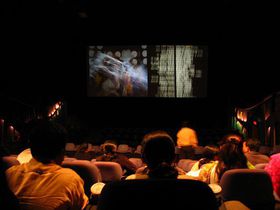 Photo: Manu Mohan, Stock.XCHNG “No. It happened to me in Slovakia when I was the editor in chief of the Blokbaster magazine. But it cannot happen here in the Czech Republic; people are more open-minded here, more democratic, more thoughtful.”

Many people come to your website to learn about what’s playing. Do you have professional reporters and reviewers?

“No, we don’t do this and I don’t even plan for it. I want to go a different way. Almost every news website has some professional reviewers who write long reviews and who go to film sets and interview stars. But we have never had it at CSFD and it’s still a popular website, so why should we have it? We are going a different way; we like it and so do many other people.”

The episode featured today was first broadcast on October 11, 2010.

Since it was first created in 2001, the Czech and Slovak Film Database, or CSFD, has gained a massive following in the Czech Republic…