In this week's One on One, my guest is Martin Palous, the new Czech Ambassador to the United Nations. Martin Palous has long been a leading Czech intellectual and his c.v. lists many important positions and publications. He was one of the first people to sign Charter 77 and was the dissident group's spokesman in 1986. When change came in late 1989 he was a key figure in the Civic Forum movement, and since the Velvet Revolution he has held numerous positions in politics, the civil service, and academia. Martin Palous was the freshly-appointed Czech Ambassador to Washington, D.C. when the 9/11 attacks happened in September 2001, and held the post in Washington until 2005. On the occasion of the fifth anniversary of 9/11, Martin Palous recalls where he was on September 11th, 2001.

What was the communication like between Washington, D.C. and Prague, on that day and the immediate days following the 9/11 attack?

"I talked to Mr. Hradilek, then my D.C.M., who was in Washington and I asked him what was going on. But he didn't know anything more than I did because we were all just watching CNN."

You took up your mandate at a time when American domestic security policy and foreign policy certainly came to pay much attention to international security and to terrorism. How much of those concerns and agendas took up your time as Ambassador in Washington, D.C.? Photo: CTK "You know, first of all the whole atmosphere was heavily influenced by that experience, but originally I think that the consensus or the unity between let's say, Europeans and Americans, was such that everybody felt like an American during these days. I remember the headlines in the European press and the political controversies and all these sensitive questions, I think appeared a little later in the process. I also remember in the fall of 2001 this anthrax situation in Washington, D.C. There were all sorts of emergency arrangements to avoid any risk in this context."

You have lived since 9/11 in Washington, D.C. and now in New York City, but you also spend a lot of time here in the Czech Republic; your family is here and you travel here regularly. How would you assess this country's preparedness for a potential terrorist attack?

"Well, I'm not an expert in this field. I guess that all systems are in place, but psychologically I think that this country still has not, and hopefully will not—let's pray for it—go through any comparable test like Americans had to in the context of 9/11. You know, when I visited New York shortly after for the first time—it was the middle of October—there was still this strange smell in the air and you could see smoke coming out from the rubble out there. It was a very strange situation. Can you imagine here in Prague, let's say something happening with the Castle, with Hradcany, this beautiful silhouette. And you would be forced to go day after day through Prague seeing that. I think that it would obviously have a significant effect, but we need to convince ourselves that we would overcome in such a situation and that terrorism simply should not be given a chance, or a thought that they would be able to achieve their goals by doing these things."

There is a growing debate in this country, about whether the Czech Republic should accept an American offer—if it is to come—to house an anti-missile defense base on this territory. Where do you stand on this issue?

"Well, obviously as a diplomat I have to first hear what the minister and the government says about these things. But I think that whatever decision is to be taken in the area of defense and security should be based on the principles and priorities of the Czech foreign policy and rational arguments. I think that if this decision will be taken in the context of our discussions with our allies, bi-lateral and multi-lateral as in NATO, if there is a clear relationship within this particular decision and the future of common European defense and security policies, then again this is a very important argument to be taken into consideration. I personally believe that such an installation in the Czech Republic could be a good thing, but first we need to hear arguments, and not to take positions without knowing real facts, real arguments. Unfortunately, this debate has not taken place so far and there are so many people already waving flags and politicizing that decision-making process and this is not a good thing."

You recently gave a speech to the United Nations General Assembly, where you stressed that your feeling is the Security Council hasn't changed much at all since the immediate post-WWII era, that in effect the structure within which it exists reflects the post-1945 era and not today's era. How do you propose that the Security Council be changed and the United Nations be reformed?

"Right now the Czech Republic is supporting the initiative of the so-called G-4. Four countries, Germany, Japan, Brazil and India as new potential permanent members of the Security Council, plus new non-permanent members coming from regional groups. Obviously there is a general debate and you have to see the continuing efforts to reform the Security Council in connection with the same efforts to do something with other U.N. bodies, like the General Assembly. Because it's true that the United Nations has been created as a reaction to the Second World War, and right now we really live in a different world, in a different security environment. It's easy to say and much more complicated—and some people might be inclined to believe impossible—to change the organization because this institutional inertia is very heavy."

You were active at two very important milestones within roughly the last twenty years. Not only were you an active participant in the events of November and December 1989, but then you were the Ambassador of the Czech Republic to Washington when the 9/11 attacks happened. What do you take with you, that having lived through these events makes Martin Palous who he is today?

"Well, this is a really difficult question—what can I say? It's, I think, possible to say that the fall of communism in our part of the world—which means in November 1989—the twentieth century, in a way, came to its end. And with the tragedy of 9/11 we have entered what is really a new era, with so many uncertainties and open questions. So I think I lived, as you said, as both an active participant and an observer through moments of real historical transformations of our time. So it can certainly help me understand the events of today, always being reminded that historical contexts are important. It seems to me that very often people, when they want to summarize their judgments, are forgetting this broader historical context and experience in situations. So I always try to take a lesson away—an exercise of understanding has always been important for me. That's why I studied so many things during my life, and philosophy definitely was a leading and most important inspiration for me. You know, to combine practical diplomacy with this type of intellectual attitude, it's sometimes strange and unusual, but maybe that's what makes Martin Palous Martin Palous." 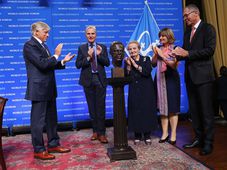 Václav Havel has just received a major honour, with the unveiling of a bronze bust of the late dissident turned president at Columbia… 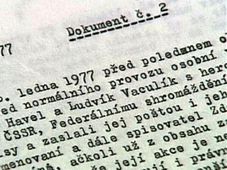 It is exactly 40 years since the launch, on 6 January 1977, of the landmark Charter 77 declaration. Calling on Czechoslovakia’s Communist…

US military convoy to travel across Czech territory