Lukáš Houdek is a man of varied interests. As well as being a photographer who has explored the post-war massacres of Czechoslovakia’s ethnic Germans, he is co-curator of an exhibition entitled Transgender Me that gets underway in Prague on Monday. In addition, Houdek, a Romani Studies graduate, writes for a leading Roma affairs website; indeed, for much of our interview I was under the mistaken impression that he himself was a member of the ethnic minority. 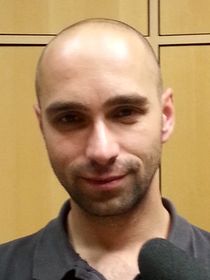 Lukáš Houdek, photo: Ian Willoughby “I was born in Stříbro, which is a small town in Western Bohemia, in the Sudetenland. My parents are labourers, so the idea of studying was not always in my life [laughs].

“I thought I would be a car mechanic or something like that. But I decided to go to study at university. So I’m kind of the black sheep of my family.”

Or a white sheep.

When did you first take an interest in photography?

“In 2005, when I was in Matiční St. in Ústí nad Labem, where a wall was meant to be built to divide Roma people from non-Roma.

“I did some projects there with children. I just had my camera with me and took some photos, and some people told me I had talent and should continue.

“It’s my first photographs from there that I’m now exhibiting, from 2005. They weren’t taken for exhibition purposes, but I’m exhibiting them now [in Transgender Me].”

I know that you have taken photographs of Romany people in various European countries. What have you found to be the similarities and differences in their lives in different European states?

“What’s very similar is their position in society. They are discriminated against all over Europe, and even in India… Well, I wouldn’t say in India they are Roma people, but they are Doms, which are, let’s say, the ancestors of the Roma, and they are in a similar position to Roma here.”

You mentioned Matiční St., which was I guess a point of conflict in the mid-2000s. Recently there has been conflict, or tensions at least, in České Budějovice between the majority population and the Roma minority. I know it’s a big question, but can you see any way forward? Or what do you think is the best way to approach that problem and to try to reconcile the two communities?

“Well, I have changed my opinions over the years. Sometimes I think it’s education that’s important – not education of Roma people only [laughs], but education of non-Roma, most often.

“They need to be educated regarding the prejudices they have. Because this is the main problem, knowledge. They don’t have any knowledge about this group of people.

“Therefore they are scared and have these phobias and antagonism. They just can’t really see that if some Roma rob somebody, it doesn’t mean that they are all thieves and robbers.

“This is the main problem, and I think if they had more opportunities to get to know each other, it would get much better.”

What’s the feeling within the Romany community? Are people scared? Because České Budějovice is a flashpoint now, but people are saying that the far-right Workers’ Party, or whatever they’re called [after being banned they are now named the Workers’ Party of Social Justice], are planning similar activities in other cities. Are Romanies afraid?

“Of course they are afraid. They are frightened. Because in the ‘90s several Roma people were killed by neo-Nazi groups here. And they have flashbacks to the Holocaust.

“It’s really getting worse and worse. If you read Facebook, you will find that it’s full of racist comments, and really scary comments sometimes. So I would say they are really scared.”

You referred to the Doms of India, the so-called ancestors of the Roma. You went to India to photograph them – what did you find there?

“Actually I went there to finish my thesis, because I studied Romani Studies in Prague and I wanted to find the similarities, if there are any, between Roma and Doms.

“And I actually did – many of them. But the question is can we say that the Roma brought them, because we can find similar, let’s say, behaviours all over the world and in different cultures.

You have also had a number of projects looking at the post-war treatment of the ethnic Germans in Czechoslovakia. What is the attraction of the subject for you?

“Well, for me it is always important to work with my own prejudices. I always do that. If I have a problem with someone or with some group of people, I try to break it.

“For example, when I had a problem with mentally challenged people. I was disgusted when I watched them, so I just applied for a summer job at a sanatorium in Greece and I spent one month there, helping them.

“I always do something like that. It helps me to overcome these prejudices.

“For me it was the same with the Germans. I was always very much against Germans, I really hated them, but I had no reason for that – just because I come from the borderland.

“I wanted to work on that somehow, and in the end I got to know that several incidents happened after the war that I was not told about at school.

“I felt cheated and I got really angry. I needed to work on this subject, also to show other people what happened here, which till now we are not able to speak about.

“I would say this helped me a lot in overcoming this problem. It’s really funny now when people tell me I am a Germanophile, or something like that. I come from an absolutely different, opposite background. But I came to this point by myself.”

Earlier this year you had an exhibition called The Art of Killing, in which you had Barbie dolls reenacting massacres from the post-war period. What was the reaction? For instance, I saw online there was an interview with you and some people were questioning your credentials, asking if you had studied history and that kind of thing.

“The reactions were quite wild, I would say. For me it was a full-time job for two weeks just to reply to emails and do interviews [laughs].

“In general I would say that it was very emotional. More than half the people were really angry and really very rude.

“But also I got many emails that were very positive, even from people who experienced the Holocaust in Auschwitz. They wrote to me or told some people to tell me that they were really happy that I’d done it.

“They felt it was really important to show the victims on the other side, too. That really made me happy when I heard this

“Of course, there were some people who didn’t experience the post-war violence, the same as me, but they had the feeling that I couldn’t speak about it but they could, because they were one year old when it happened. 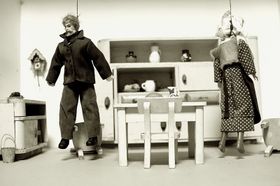 'The Art of Killing', photo: Lukáš Houdek “I think it’s still taboo. But this project showed that there are more and more people who are very open to hearing about it and to reconstructing their opinions about it. So I think some kind of reflection and discussion has started.”

Among your other activities is co-curating an annual exhibition called Transgender Me, which is beginning on Monday. What is Transgender Me?

“Transgender Me is a programme or an accompanying event – that was the idea – to Prague Pride, which starts in two weeks.

“The idea was to give a space for transgender issues. Because normally at Prides all over the world there is not enough of a transgender programme in the programme. It’s always about gays and lesbians.

“The first time, during the first Prague Pride, it was supposed to be own exhibition of photos. But after I was, like, maybe we should add this person or that person, and it became really big.

“We always have a theme on which we focus. For this year we chose transgender in different cultures, times and contexts. We had this idea at the beginning but it was difficult to get it together. So we had to wait for three years to finish it.”

My final question is, if you don’t mind me asking, you’re gay and the Roma community seem to me to be a very traditional society. Has that been problematic?

“Even some Roma think that I am Roma and they tell me that I shouldn’t be afraid to say it openly, publicly. But I’m not.”

Well, excuse me for not doing enough research. Sorry. 'Transgender Me', photo: Lukáš Houdek “It’s OK. As for being gay, as I was doing research in Roma communities I was afraid about how they would react to finding out that I’m gay. Because they sometimes spoke about gays very rudely.

“But in the end when I had a public coming out two years ago in some article I got some emails from some old Roma who said, we are behind you, we believe in you.

“I was really happy that they took it this way, and I was really surprised. So I have absolutely no problem.

“My opinion is that if you yourself don’t have a problem with your sexuality and you show people you are OK with that, then they can’t really harm you. Because you are self-confident.”

The episode featured today was first broadcast on July 29, 2013. 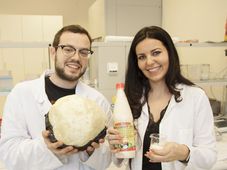 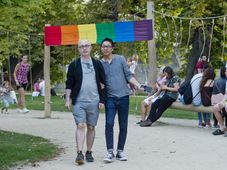 Lukáš Houdek is a Czech artist, a leading figure in the Hate Free initiative, and an openly gay campaigner for LGBTQ rights. During…