Ladislav Koran is a Czech American whose life story is almost beyond belief. As a young man he was an accomplished athlete and friend of the greatest Czech runner of all time Emil Zatopek. He was still in his mid twenties when the communists came to power and, like so many bright and energetic young Czechs, he found himself on the wrong side of the new regime. It was not long before he was arrested, and he went through ten years of hell in a Stalinist labour camp. But even this did not break his spirit and energy. Today, in the United States, where he settled after going into exile with the Soviet invasion of 1968, he is still an active athlete, and one of the most respected members of the Czech émigré community. Ladislav Koran talks to David Vaughan. 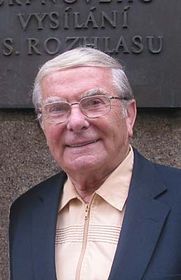 Ladislav Koran "I was born in Prague 9, Hloubetin, which still exists as a part of Prague, in 1924. My father was a chemistry engineer and my mother was also working in her own business."

From childhood you were always interested in sport, weren't you?

"Ever since I was 12 years old I was very interested in sport. My mother didn't like it very much, because I was trying to ride a bicycle and she thought it was dangerous. Then in 1942 came the assassination of Reinhard Heydrich [the Nazi leader of the occupied Protectorate of Bohemia and Moravia], and after that the situation was very difficult and we couldn't really ride bicycles, so I started running. Running still is, to this day, my main sport. I love it. I just cannot be without it and every day I run between 7 and 10 km on the road, I enjoy it and I believe that it is keeping me in good shape."

And I believe that you practice for an hour and a half every day.

"Every day for an hour and a half I am jogging and walking and exercising on three different machines, and after that I go into the Jacuzzi to finish it all off."

And you also still compete, don't you?

"I still compete in the senior Olympics, but this is just a little bit of fruit on the top of the cake, because I mainly do it for myself and for staying in good shape for my life."

To go back - your family survived the war. What happened then? What did you study?

"I studied electrical science. I was always handy with my hands, and I didn't want to go and be an electronic engineer for some big outfit, because that was not what I was looking for. So then I was working for myself - as a jeweler for example."

How did it come about that you ended up spending ten years in a Stalinist labour camp - a concentration camp? What happened? 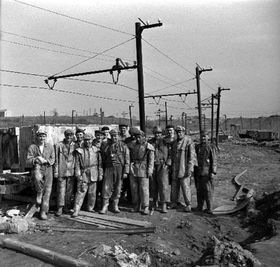 The labourers from the Jachymov uranium mine "Well, what happened was that, when I was very young I had a little factory, a laboratory to manufacture electronic pianos, guitars and basses, and that was actually the first, not only in Czechoslovakia at that time, but the first in Europe. It was not very common to do this. I wanted to sell a license for manufacturing in Canada and Australia through a friend, and the system - at that time already the communist system - they thought that I wanted to commit espionage in this business, and they wanted to lock me up. I heard about it through a friend of mine - through my sport activities I had lots of friends - and so I escaped in December 1949 to Germany and in May of 1950 I came back to pick up my wife and my son. They caught me and I got eighteen years of hard labour."

Tell me something about life in the camp. It must have been hell.

"Every concentration camp I believe is hell. It was different in the Hitler camps and the Stalin camps, but in both everything was bad for you, for your life, for your body, for your soul, for everything. We were working very hard in the uranium mine. I was in Jachymov for ten years. And the equipment they gave us was not for miners but for prisoners. We were actually slaves of the system."

Stalinist labour camp Many people must have fallen ill, the must have been accidents....

"I have never seen so many dead people as in that mine, because there were lots of accidents. I don't want to complain about that time but it was a very hard time in my life."

And there must have also been some extraordinary people there, because so many of the Czech intelligentsia, people who meant something, must have been there in these camps.

"Well, I was detained in a camp where there were prisoners sentenced to ten to twenty-five years. I was in Rovnost Camp with General Sedlacek and General Pernicky; I was there with the World Champion hockey players, such as Gustav Bubnik, Vasek Rozenak, Stanislav Konopasek. They were all double world champions before they arrested them. Just before they were meant to go to London to play the World Championship, they arrested them all and gave them fifteen, twelve, ten years imprisonment."

Were athletes like yourself and the hockey players better able to survive in the awful conditions in the camp than some of the other people?

When were you released, and what happened then?

"I was released from the prison in 1960 under the big amnesty of President Novotny at that time, and then I actually went back to Jachymov to work as an electrical engineer, because there was no space for me otherwise."

So you actually went back to the mine where you'd been working before as a prisoner!

"It was at that time actually like a 'republic within the republic'. They knew what I can do for them and otherwise they left me alone. Outside I was still a slave for the StB [secret police] system and they were after me all that time."

In the late 60s, the time of the Prague Spring, you left Czechoslovakia. That must have been very difficult.

"I knew that I cannot go illegally over the border. I was not young enough for it. You have to be a little bit of a cowboy to do something like that. But here I saw the hole in the wall, and I was trying to use it if I can. So I met a friend of mine from the previous time - from California - and he promised to send me an invitation, and in the situation of the Prague Spring I was able to get a passport and three months in the United States. Then I prolonged it to six months and in the meantime the occupation of Czechoslovakia happened and I said to myself that ten years in one man's life is enough to be in prison, and I didn't return."

We don't have very much time, so we won't talk in much detail about your life in the United States. You did many things. Even though you were over forty you managed to make a very successful career. I believe that at one stage you even ended up on board ship on the famous Calypso with Jacques Cousteau.

"That was because of my friend from the sports time here in Czechoslovakia. We were very good friends and I met him in California. We were working actually on the equipment for Cousteau and we became business friends. Several times I was on the Calypso. Always before they went for some big trip we had to put all the machines together and be sure that everything was well prepared for the big trip."

What was it like experiencing the Velvet Revolution and seeing the fall of the communist regime here in Czechoslovakia (as it was still then)?

"That was something that I did not think I would live to see. I knew and was convinced that it would come one day. I didn't know that I will still be alive when it comes. It was - after becoming an American citizen - the biggest day of my life. We are so happy for the Czech nation and for all the people living here that they go out from 42 years of communism to a free democratic life."