Kryštof Hádek first made waves nearly a decade ago when he played a fresh-faced young pilot in the World War II drama Dark Blue World. Since then the Prague-born actor has appeared in films of varying quality, though he has recently been enjoying a purple patch; Hádek won a Czech Lion award for his part in the acclaimed 3 Seasons in Hell, and was acknowledged as one of European cinema’s new talents when he was invited to this year’s Berlin Film Festival as one of its “Shooting Stars”.

When we met last week, I first asked Kryštof Hádek to describe his beginnings as an actor.

“I was probably 11 years old and I was quite naughty and…energetic. So my mother put me in some local drama schools and stuff like that. And I was also in a children’s group at Czech Radio. 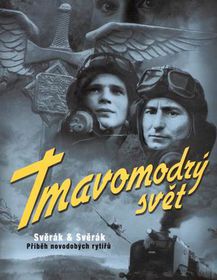 'Dark Blue World' “Also it was kind of natural that I followed the footsteps of my brother who is an actor as well, my older brother…I just wanted to smoke cigarettes and watch the ballerinas in front of the Czech conservatory.”

About a decade ago you were in Dark Blue World, when you would have been about 19 or something. What was that experience like for you? What are your strongest memories of the filming?

“Well, I had just turned 18 when we started to shoot. I think I was too young to have other memories than that it was a great shoot with all these old Spitfires and these nice sets, and all these nice people, so it was more like a great holiday for me at that time. It wasn’t really work.”

How did it feel going from being unknown to being, I guess, instantly recognisable in the Czech Republic?

“Popularity is the kind of thing that…hammers you in the head. It’s a thing you have to deal with, and I think I was dealing kind of well. Suddenly it was a big change for me, because all these journalists and people in the pub were saying, hello, it was a nice movie, and stuff like that.

“I think I was quite young for it as well, so I had to leave the Czech Republic for a while, because I thought it was the best way how to keep myself on the ground.”

Recently you were one of the “Shooting Stars” at the Berlin Film Festival, which is I guess a way of honouring young actors from around Europe. What did that mean to you, and what could it mean for your career? 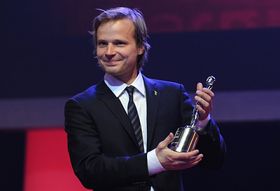 Kryštof Hádek at Berlinale, photo: CTK “So far nothing [laughs]. But the good thing about it is that I met all these other shooting stars from all around Europe and they were all great, and all nice characters.

“It’s kind of a prestige thing. But the best thing about it is that the film festival created a platform for us to make new contacts. For example we had a kind of speed dating with casting directors from all around Europe. Maybe within a year someone might call, because otherwise next year there will be a new shooting star and the game will go on…”

Earlier this year you won a Czech Lion award for your role in the film 3 Seasons in Hell. It seems from my perspective that you’re currently enjoying the most successful period of your career. Why is that happening, do you think?

“I don’t know. It’s like waves. Sometimes you have a big wave, sometimes you have a small wave. For example now I’ve got a bit of a darker period [laughs], which is kind of strange. You have all these awards and stuff like that, and then you have no work. Because people might be afraid that you’re going to be too expensive, or you’re going to be too picky.”

“Right now I’m waiting. But I don’t care, because I’ve got a lot of stuff to do in my life. It’s good to have a break.” 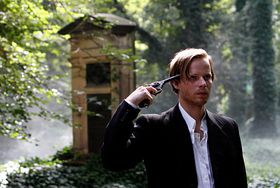 '3 Seasons in Hell' I was reading an old interview with you in which you were saying that there were some Czech comedies that you had yourself appeared in, but you wouldn’t watch. Why not?

“Did I say that? I was kind of honest. The thing is I’ve made a few comedies but I was probably upset at that time…but there are a few films, unfortunately comedies, which I haven’t seen, yet. But there are also comedies that I have seen.”

Generally speaking, what do you think is the standard of contemporary Czech films?

“I think it’s getting better. I think there’s a new generation of coming scriptwriters and directors. The problem is I think with the producers, I would say. Because sometimes the producers develop films very quickly, within a few months, just to make a big budget.

“And sometimes they make movies just for the audience, instead of the audience learning from the movies, which is I think a not really ideal…world [laughs].”

I know you studied acting in the UK. What did that give you?

“I learned a bit of English. I had been kicked out of the Czech conservatory at that time, after Dark Blue World. I was always hanging around and drinking and doing bad stuff. I was 20 or 21, and I went to England where I was completely unknown and nobody was interested in me. So I think it was a good way of, as I said before, keeping myself on the ground.” 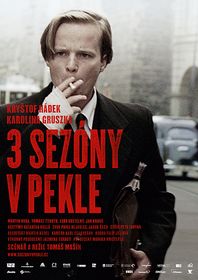 '3 Seasons in Hell' You also have acted in some Irish TV drama. What is that?

“It’s called Raw. There have been two series of it on RTE television. It’s about a restaurant in Dublin and all these people working in it. I play a Czech waiter. The first series was quite progressive. There was some homosexuality and drug abuse and some sort of progressive stuff I would say for Irish TV drama.

“It’s done pretty well, actually, so there might be a third series. It’s better to be in an Irish series than in a Czech series.”

Have you got ambitions to work more abroad? For example have you got an agent in the UK or in America?

“I’ve got an agent in the UK, in London. And yes, I’ve got the ambition. Because I think there’s still a kind of big…gap between movies made in the Czech Republic and movies made abroad.”

It seems to me that the only contemporary Czech actor who has been successful internationally at a high level is Karel Roden. What do you think is the obstacle? Why aren’t other actors also achieving what he has achieved?

“There might be many reasons, actually. Karel Roden is a great actor. I would say he’s absolutely stunning, and also he’s a great character, a great type of actor.

Where would you like to see your career in, I don’t know, 10 years from today? 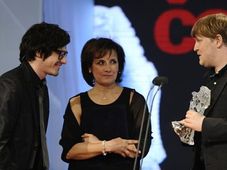 While all eyes were on the awarding of the Oscars in Los Angeles on Sunday, the main event in cinema in the Czech Republic came a… Today in Mailbox: where to find Radio Prague frequencies, cycling in Prague and the Czech Republic, a 1930s song featured in the film…