Klara Vesela-Samkova: I won't give up battle for Constitutional Court

Klara Vesela-Samkova is one of the Czech Republic's best known human rights lawyers. Over the last ten years, she's been involved in a number of high-profile cases of discrimination against members of the Roma minority. She was once an MP for a Romany political party - even though she herself is white. But it was her controversial nomination for the Constitutional Court - a nomination subsequently rejected by the Senate - that's earned the attention of the media. 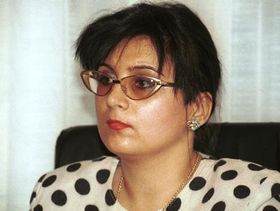 Klara Vesela-Samkova, photo: CTK Klara, what was it that made you decide to become a lawyer in the first place?

"It wasn't a decision, it was fate, and it happened under very poor circumstances. Both my parents are art historians, which was quite a badly-paid job, especially in the time of Communism. Therefore they practically forbid me to go the Faculty of Humanities, where I was naturally inclined to go. Instead I started a chemistry degree, but that lasted just six months. It was a nice attempt by an intellectual girl to try the natural sciences, but I must say it was quite unsuccessful. So I went to the law."

From 1990 until 1992 you were a deputy in the federal parliament of Czechoslovakia. Your party was the Romani Civic Initiative, even though you yourself are not Roma. Why?

"Well, I'm from a proper bourgeois family, with a strong intellectual background. I can hardly explain how I ended up among the Roma community. The fact is that there are plenty things I do not through my mind but through my emotions. I think it was a purely emotional decision that brought me there. I realised that the Roma, with their openness, with their ability to think and speak directly, are maybe much closer to me than any of the "high societies" to which I should naturally belong."

Because if you look through the papers, you're often described as a "Romany lawyer". Are you ever tempted to call them up and say 'look, I'm not actually Romany.'

You're married to the Romany activist Ivan Vesely. What was the reaction of your family and friends when you told them you marrying a Romany?

"I suppose you know that famous movie with Sidney Poitier - 'Guess Who's Coming to Dinner?' Well, about two or three years after I got married, they showed it for the first time on Czech TV. About midnight my mother called me, absolutely in shock, screaming - 'My goodness, it's not possible, they must have made this film in our living room!' It was quite difficult. I must say that the happy ending took many years. But I'm still married, we celebrated our tenth anniversary this summer, and I suppose that our marriage has lasted much longer than many so-called "white" marriages. When I look at my desk and see my divorce cases - cases of very sophisticated, very rich and very powerful people - well, I must say I'm very satisfied with my gypsy."

You've defended the rights of the Roma community for the last ten years. Have you noticed any improvement, any progress in this country in that time?

"No! No. There's been some institutional progress, there are some new offices and things like that. But unfortunately I do not see any improvement in the community itself."

Recently you made the headlines when President Vaclav Klaus nominated you to become a member of the Constitutional Court. What was your reaction when you heard that news?

"Well, first of all, the President is not so rude that he'd tell the media before asking me. So of course I had several meetings, both with his close advisers and then with President Klaus himself, and we found one thing: I do not agree with Mr Klaus 100 percent in his opinions, and of course vice versa. But what is - according to me, and I suppose according to him as well - most important, is that we both have opinions we can discuss. But we won't change those opinions simply because someone else wants us to. This stability of opinions, and I would say the consistency of personality, was the main reason why Mr President nominated me. He expressed his reasoning to me using these words."

Several weeks later, the Senate - which has to approve the President's nominations to the Constitutional Court - rejected you and several other candidates. Why do you think they did that?

"I think there are several points. The first point is the deep personal animosity between the President and the Senate itself. The second point is that several weeks ago, I won a court case [at the European Court of Human Rights] in Strasbourg. I won quite a substantial amount of money for my clients [who were Romanies from the city of Usti nad Labem]. The mayor of Usti nad Labem did everything to compromise me, because for him to admit that a bunch of lousy, lazy gypsies were right and he was wrong would not only be a loss of face, but also a loss of his mandate and the end of his political career. I know about people who phoned distinguished senators ordering them to vote against me. The chairman of the Senate himself told me."

So you say this is a campaign against you.

"Yes, it's a campaign against me. I'm deeply convinced of it, and I'll prove it. It's quite easy."

So you still want to become a Constitutional Court judge, and you still think this is possible.

"Look, of course I was quite disappointed by the Senate's decision. On the other hand, I was very encouraged by the reaction of plenty of my clients, who were terribly happy not to lose their attorney! But as I said in my final speech [to the Senate] - we shall see each other, for sure."