Today’s guest on One on One is Jiri Dedecek – singer, political activist, Czech PEN club president, and translator. Mr Dedecek is perhaps best known for his translations from Russian and French into Czech. One of his most recent projects was translating the songs of Jacques Brel and Vladimir Vysockij for the ballet ‘Solo for Three’, which premiered at the National Theatre in Prague in May of this year. I caught up with Jiri Dedecek in his expansive office above the National Library, in Prague’s Clementinum. 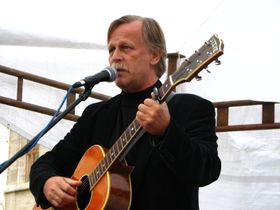 Jiri Dedecek, photo: Stepanka Budkova “So we are now sitting in the PEN club’s headquarters. And I am now the president of this organization. It was founded by John Galsworthy and other English writers in the 1920s and then it came to the Czech Republic four or five years later. Karel Capek was its founder here. So that means that Karel Capek was one of my precursors.

“We have club activities here, on Thursdays, for example, we invite our members to come and listen to lectures. As you can see, we have a stage for readings. And our task since the revolution is in general to uphold freedom of expression.”

Does the PEN club still have a purpose in this modern, democratic age? 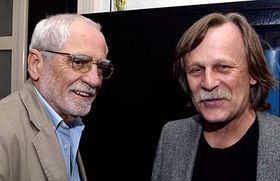 Jiri Dedecek with Jiri Stransky, photo: CTK “After the revolution, of course, this strong political current which ran through the PEN club lost a little bit of its importance. But we are, generally speaking, a club. And what is the purpose of any club? It’s to get people together, to make a pleasant atmosphere for them, one that they feel happy in. It is where its members come to drink a glass of wine and discuss. They discuss literature problems with other writers, translators and critics. So, that’s the main purpose of PEN, on both a national and international level.”

I know that you are learning English right now, and I wondered if you had any plans to start translating English prose, and English songs, into Czech?

“I have, oddly, translated occasionally some English lyrics in the past. I translated, I remember Randy Newman’s ‘Have you seen my Baby in the Avenue?’ (‘Kdo videl mou holku v blizkem okoli’). You can hear that I tried to translate the rhythm of the song as well.

“Normally I find that I am able to translate from English, despite not knowing so much English. Because for good translation into your maternal language, the most important thing is the knowledge of your own language, not of the foreign language. For the foreign language you have dictionaries and the internet and many things to help you. Of course, sometimes you have to ask native speakers for advice. But the art of translation is the art of your maternal language, first and foremost, I think.”

You do a lot of translation of songs from French. There is a real sense of ‘la pathetique’, or pathos in some French songs which you don’t find so often in Czech singer songwriters’ work – if at all. Do French songwriters have something that Czechs just don’t? 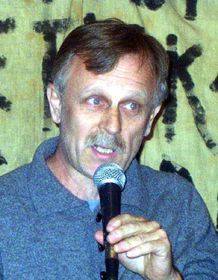 Jiri Dedecek “Yes. It’s a case of Jacques Brel primarily. Because his manner of singing, and his songs and texts, are full of pathos very unusual in Czech conditions. I heard some of his songs translated and sung by Hana Hegerova. And she works with the same form of pathos as Brel. She really tried to cry on stage, she was pulling very dramatic poses. And I was ashamed. For me, it was too much. I know she is a great singer, and Brel is fantastic. But, you know, I was educated by Svejk, and I grew up with Czech history. And we don’t have this tradition in Czech song, we don’t even have it in Czech literature. I think Czech people are a bit embarrassed by pathos.

“Here’s an example: In France, on November 11 – they commemorate Armistice Day. And many, many people assemble in the town square, and they read the names of all of the people killed in the First World War.

“I was in the town Vousiers, up in the mountains, in the Ardennes. And there were 220 names on the memorial. The mayor read all of these names, and everybody stood still and paid attention for about 40 minutes while he read. At the end they sang the Marseillaise. Nobody laughed, nobody got bored and walked off. Everybody was really moved. I tried to imagine the same situation in some Czech village, in some Czech town, and it is completely impossible, really.”

Czech singer songwriters might not be masters of the pathetic or the pathos-filled, but there is a very healthy singer songwriter scene here in the Czech Republic right now. I was wondering if you heard anyone’s songs at the moment and you just thought ‘wow, that’s good’?

“Of course, there are many songwriters I like. Vladimir Merta is the master of masters – I think he is one of the best in the world. Unfortunately, he was born in the Czech Republic and so he sings and speaks Czech. But really, it is fabulous what he can do with his guitar and his voice.

“Then I like many songs by Jaromir Nohavica. Many of his songs are in fact quite filled with pathos, but it’s a Czech form of pathos. And this form is a little bit reserved. It is not so open as Brel’s was.”

To change the subject completely, you have been in recent years very much involved with the Czech Green Party. I was wondering if you could tell me a bit about this? 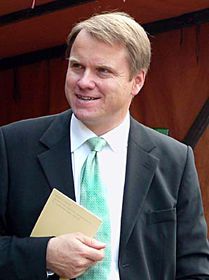 Martin Bursik “It was very easy, because Martin Bursik is not only my neighbour in Prague 1, but also my friend. And I met him once and offered him my help in the run up to the elections three years ago. I told him I could play a few concerts for him for free and write some articles about the Green Party – because I have a weekly column in Cesky Denik newspaper.

“And after two or three weeks, he told me I could help the Green Party more than that. Because they had no candidate for the Vysocina region, and that is where I have my country home – so I already had some connection to the region. So that was how I became the Green Party’s no.1 in Vysocina. And I was very happy because the people were really great and we worked really hard. From 0.4% we went up to 4.98% or something like that.

“But, from the very beginning I knew that I could never be a member of parliament. Because for that, the Green Party would have needed something like 13% of the vote. I have up until now been very, very satisfied with everything the Green Party has been doing. I like the party, and I don’t regret any of this time, or any of this work.” Ahead of the 30th anniversary of the Velvet Revolution, an eclectic group of musicians based in the United States has recorded a special…

Karel Plíhal – one of Moravia’s most beloved, and jazziest, folk singers

Moravian-born folk singer, songwriter and music producer Karel Plíhal first picked up a guitar when he was fifteen, and got into the…