My guest in this week's One on One is Jana Hybaskova, former Czech ambassador to Kuwait and now candidate for the forthcoming European Parliament elections. Jana Hybaskova is the only woman - from any country - ever to have held the post of ambassador in Kuwait. But she's best known for the manner in which she left the post - she was sacked after criticising the Defence Ministry's decision to withdraw the Czech Army Field Hospital from the Iraqi city of Basra, criticism that earned her praise and scorn in equal measure. Jana Hybaskova spent her early years in Algeria, and it was there her love affair with the Middle East began. Jana Hybaskova, photo: CTK "My father was not a diplomat, he was a vet. My parents lived in incredible conditions in southern Algeria, down in the Sahara. We had no air-conditioning, we had no running water in our house. And you know, this gives you almost a physical feeling - I love hot weather, I love the desert. I feel at home in the Middle East as well as in Europe."

And that's presumably why you chose to study Arabic at Charles University as well.

"Well, it was part of the story. Actually my choice came from the fact that during Communism, I think a lot of young people were trying to find something that could be called 'inner emigration'. Things like studying medieval manuscripts, studying medieval languages, doing something very distant from what was the current social reality in the then Communist days. So Arabic and Oriental studies was the perfect, exotic way out from what was the grey reality of Communism in my country."

You were a diplomat until last year, you were the Czech ambassador to Kuwait. What was it like being a female diplomat in the very male dominated society of an Arab country like Kuwait?

"I like this question, especially men when are posing it! If you can imagine being a young lady being surrounded only by men, it's simply splendid! I enjoyed this situation a lot. I was actually the first and the only female ambassador to the state of Kuwait. Kuwait is quite a democratic, developed society, so Kuwaiti officials and opinion-makers and people around me were doing everything to give me the feeling that I have no reason to feel like a stranger, even a female stranger, in their country. But of course Kuwait is different from Saudi Arabia. I had many occasions to travel there, and my feelings were different."

You famously lost your job last year after criticising the Czech government's decision to withdraw the Czech Army Field Hospital from Iraq. Surely you knew when you made that criticism that you were asking for trouble? Criticising your boss, essentially.

"First of all I was not criticising my boss. I was not criticising the Foreign Minister. And I was not criticising - directly - the Prime Minister. I was criticising the Chief-of-Staff of the Czech Army and the Minister of Defence, because they both tried to do their best to protect the army from any democratic, parliamentary decision-making, and they tried to close the army to its inner circle, making its own cosy decisions inside the system, which is of course non-democratic and totally against NATO rules for example. But the situation was so alarming, the reasons why the field hospital had to be brought home, that I could not keep silent and I had to speak. This feeling was so strong that I was not thinking very much about plausible consequences."

Do you have any regrets about criticising the government? Do you sometimes wake up and think 'I wish I hadn't said that'?

"Yes and no. I came to the Foreign Ministry in January 1990 with a very enthusiastic wish and vision to turn Communist diplomacy into a new democratic, transatlantic Czech diplomacy, and this was my dream. And I devoted all my previous life to the foreign position of my country and also the reconstruction of its foreign service. So once I had to go home and actually I'm now no longer working actively with the Foreign Ministry, it was a little bit bitter feeling - maybe all what we started to do 15 years ago was not yet accomplished. So I feel a little bit like it was a failure of my long-term initiative to change the conditions in Czech diplomacy. On the other hand I've started a new life, which is exciting and which offers a lot of new opportunities. But frankly speaking, it's definitely easier to work in a structure - even if you are an ambassador in a military zone - than to be a lonely intellectual trying to get all the independent activities together. So somehow for me personally of course it was easier to be an ambassador than the current situation I'm in."

You're standing as an MEP. You've spoken of Czech accession to the European Union as a culmination of a 1,000-year journey from south-west Europe to north-west protestant Europe. What do you mean by that exactly?

"Well it's very difficult question for a radio answer, but I'm sure that since the Christianisation of my country there's always been a historical battle pulling my country between the eastern cultural bloc and zone, represented by the Orthodox Church and then the re-Catholicised Hapsburg Europe, and a tendency to go west, to let's say John Huss and a more protestant and liberal environment, which was simply called "the West." And I think this is definitely not the result of the last 50 years and what is now called eastern enlargement. Rather it is the result of a very long-term historical process."

But "the West" is also Spain, Italy, Ireland - Catholic countries, and at the same time civilised, cultured countries.

"I'm not saying that Catholicism is not civilisation! But recalling the period of let's say the golden age of Czech language and Czech literature, recalling the Bethlehem chapel and the teachings of John Huss, re-Catholicisation was actually imposed by force on our country for 200-300 years. It stopped any natural development."

"I think that due to the fact that on May 1st we'll enter the European Union, this will be very good timing, it will be a period when everyone here will think about Europe, will feel they are in Europe, will be in Europe. So the awareness will be here. Secondly, we were not born to join the EU. It's not something natural that we breathe like air - we were striving and fighting to get there. So actually, paradoxically the Czech population is much better educated about EU concerns than, for instance, the UK population. Third, people here are still living on some 60 percent of the standard of living in the rest of Europe, and they dream, they wish, they strive for better lives, for happier lives. And so the EU and its institutions - including the European Parliament - are attractive for the local population. Recent polls said 60 percent of people would vote. I'm a bit more sceptical, but definitely I hope it will be more than 20 percent, it could be 45 percent. I'm sure most of those people are not Euro-phobic, they are positive, and pro-European." The legacy of communism and the need to reunite European history

Last month Prague hosted a major international conference on the crimes committed by the communist regimes of Central and Eastern Europe. Delegates from…

Should an EU body be created to deal with Europe’s Communist and Nazi past? 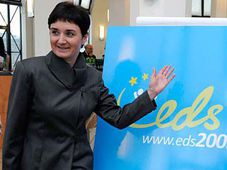 Smaller parties in the Czech Republic are already gearing up for this year’s elections to the European Parliament, anxious to reach…