The leading US guitar player Gary Lucas may be best known for his work with the cult musician and artist Captain Beefheart (real name Don Van Vliet). His biggest commercial impact has probably been as co-writer of tracks on the debut LP by the much loved Jeff Buckley. But – Lucas told me on a recent visit to Prague – very early in his career he also got the opportunity to work under one of the true greats of 20th century music, Leonard Bernstein. 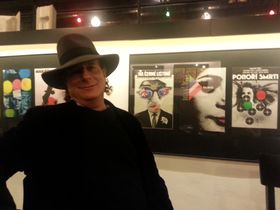 Gary Lucas, photo: Ian Willoughby “One of the most profound influences on me as a boy and my development musically were Leonard Bernstein’s young people concerts, which was a series every couple of months on the CBS network.

“Bernstein would play to a youthful audience that he had assembled at the Philharmonic Hall in New York City works by composers such as Mahler and Stravinsky and talk about them and give examples of their music.

“I really grew into a love of classical music thanks to his example. He was a marvelous educator and personality.

“Years later when I was at Yale University I saw that they were looking for a lead guitar, electric guitar to play in a production of Leonard Bernstein’s Mass.

“Yes, he actually did a Catholic mass. Although it’s very catholic in the wider sense of the world – it’s very eclectic…”

That was related in some way to John F. Kennedy?

“Yes, it was composed to inaugurate the John F. Kennedy Center for the Performing Arts. Then the Yale Symphony Orchestra mounted a production for the European premiere in 1973.

“I got the part and flew with about 40, 50, 60 singers, instrumentalists, dancers to Vienna. That was the first time I set foot in Europe. We did it at the Konzerthaus there in Vienna.”

“He was very warm. I’d use the word avuncular. He drew me and other questioners into his orbit.

“When I met him, he looked me up and down… I had a psychedelic haircut, what they used to call a Jewfro; it was like a super Afro like Jimi Hendrix, all teased out.

“And I was wearing glitter pants and glitter platform shoes and a black leotard top and he said, oh, the David Bowie look. In a very nice way, in a friendly way. 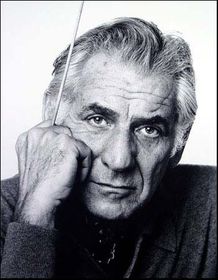 Leonard Bernstein, photo: Jack Mitchell, CC BY-SA 3.0 “We laughed about it and I said, hey, I was playing the lead guitar tonight – because he was there to supervise the production.

“And he said, man, you were really wailing. That was the most high honour and praise I’d ever received from any significant person, up to that point.”

Later of course you worked with and I think managed Captain Beefheart – a different kind of musical genius.

“Yes. To me, Don Van Vliet was on as high a level. In fact, I’ll tell you, as an artist I’ve yet to meet anyone who was as fully formed and exuding art from every pore of his body, 24/7, as Don Van Vliet.

“And I’ve worked with some of the biggest names in music. I love them all, but I’m just saying personally, for me, Don was my man.”

There are stories about him being quite a tyrant to the Magic Band.

“Sure he was. It’s pretty well documented. He could be really unreasonable and irrational and sometimes very mean. But I don’t want to go there and tell stories about him.

“I mean, you can read the books that have come out by former Magic Band members, disgruntled accounts of working with him.

“It was like a baptism of fire. All I would say is, why did these members come back and keep working with him, if there wasn’t something worthwhile about it? I’m really proud of having worked with him.”

But wasn’t it stultifying when he wouldn’t let the musicians improvise?

“Yes, to a degree. But at that point in my career I was just so impressed with his overall approach to music. I was to happy to subsume my own creative energies in improvisation and composing music to be subordinate to his vision.

“To me it was like playing classical music, where everything was scripted, but we didn’t use music. Well, some of them did from time to time.

“I memorised all the parts and I played them identically, night after night. Because if you went off the script there would be a train wreck.” 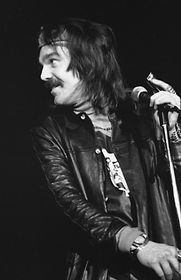 Captain Beefheart, photo: Jean-Luc, CC BY-SA 2.0 Was there anything in particular that you felt you learned from working with Beefheart?

“One thing was he knew how to arrange his music for a small group of four or five people and make it sound symphonic, with interlocking parts. That was one his particular genius… components.

“I would say – not that my music sounds anything like Don’s, I would never presume to even aspire to this – that in terms of how I arrange for ensemble, like Gods and Monsters, my long-time band, I think I was influenced. In terms of trying to get a big, full orchestral sound with just a few players.”

Another name you’re associated with is Jeff Buckley. How did that collaboration come about?

“Well, I was a big fan of his dad, Tim Buckley. One day in ‘91 I got a call from the producer and impresario Hal Wilner, who said, listen, I’m putting together a tribute to Tim Buckley. And I said, I love Tim Buckley.

“He said, great, it’s going to be at St. Ann’s Church in Brooklyn; I’m inviting so and so and so and so, and I’d love for you to be part of it. Also, I’d like to try and put you together with his son, Jeff.

“I said, I didn’t know Tim had a son. He said, neither did we, but now that he’s heard about this he’s come forward and he wants to come in and pay his tribute to his father. And I think you guys would probably work well together.

“So I went down with the singer I was working with at the time in Gods and Monsters. Jeff was there in the church, kind of hiding in a pew.

“I didn’t see him. But then when I was packing my stuff up to leave outside the main room after the run through this kid approached me and right away I said, this must be Jeff Buckley, because he looked the spitting image of Tim.

“He said, you’re Gary Lucas, I love you, man, I love your guitar playing, I loved you with Captain Beefheart, and I love what you were doing in there…

“I was impressed with this naturally, because I always respond to praise that seems genuine. So I said, why don’t you come over to my flat in Greenwich Village and let’s try one of your dad’s songs.

“Jeff came over the next day. I set up a loop with my pedals and delays and started to play the opening figure, handed Jeff a mike.

“He opened his mouth and I had a jaw dropping moment. My mouth was open too, but in astonishment. Because he was so brilliant.

“When we were done I said, Jeff, man, you’re a fucking star. And he said, really, I am? I said, yeah. He was not that confident at that point.”

Obviously his voice stands out as an incredible voice, one of the greatest in the last 50 years even. But as somebody who knew him personally, what other gifts did he have as a musician?

“He was very sensitive. Besides his vocals, he could play any instrument that he really set his mind to. He was a very accomplished guitarist and he could play bass and drums…"

Over your entire career you’ve collaborated with many, many people. But is there any single thread that you think runs through your work and your career?

“I think the heavy thread of blues, and a mystical, haunted, ghostly overlay, are the major unifying principles in my approach…

“I think what it is, is me trying to connect with the haunted world, the spirit world. I feel in the ether around me ghosts.

Does that come through in your guitar playing? 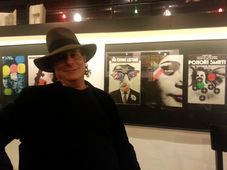