When Dr Jana Švehlová’s father was imprisoned by the communists for political reasons it left a deep impression on her life. After doing research into the psychological impact of such experiences on women like herself, she began a group called Daughters of the '50s which is a forum for discussion of often painful memories – and a support group for women whose childhoods, and often subsequent lives, were blighted by the mistreatment of their parents. When I met Dr Švehlová at a Prague centre cafe, she first told me her own family’s story.

“My father flew with the RAF during the war, and my mother was with the British Land Army. I was born in England, on Christmas Day; the Queen sent me a little toy because I was a Christmas baby.

“Right after the war my father couldn’t wait to get back to Czechoslovakia. My mother and I came by train and sea, because some of the families were flown back but some of the planes crashed, and the Red Cross organised it so we came by train.

“Before we arrived here my father bought a baby carriage for me on Wenceslas Square. He was trying to get on the tram…my father was still proudly dressed in his British RAF uniform, and the conductor yelled at him, don’t think we’ll let you get on the tram – you can walk because you in the West sat on your butts, while we suffered under the Germans. So walk! Which my father should have realised was a little bit of a warning of what was to come.

“We lived very happily until 1949…of course the Communists took over in 1948…Three days after Christmas, I was six years old, they came to arrest my father – it’s well known that these RAF people were later persecuted.”

How long was your father imprisoned? What was the effect of imprisonment on him?

“He got ten years and he was there for ten years. He was a lawyer by profession but when he got out…they didn’t get just a sentence, they also got ten years of loss of civil rights…so he had to work as a brick layer.”

I know you yourself have studied the inter-generational psychological influence of parents being persecuted on their children. What have been your main findings in that area?

“One of the punishments for the children was that they were not allowed to get a formal education often after eighth grade. In Czech culture that was a really big deal, so their self-confidence was zero.

“That I think is the greatest effect, which is reflected to this day – because they couldn’t study they obviously had professions which reflected their lack of education. Now they are middle-aged and their pension is very small. So even though we are almost 20 years after the fall of communism it’s still with them.

“There were many effects on them. Guilt feelings – they didn’t know what was happening in those prisons to their fathers, and sometimes even their mothers were imprisoned.

“When the parents got out of prison the children didn’t understand why the parents were away. They were brought up by the grandparents. The parents sometimes didn’t find a way back to their children.

“I could go on and on and on. But the main thing is the lack of self confidence and the feeling that post totalitarian society does not want to hear what happened to them. It’s this silence, within the society.” 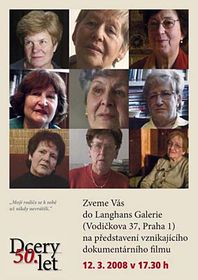 “Well, it all started when I interviewed 12 of these women 10 years ago. It was all anonymous, but I asked them, would you like to meet the other interviewed women? They all agreed.

“There were 12 of them 10 years ago, but slowly the word got out and now it’s a kind of support group, it’s not organised, it’s not even an NGO. There are almost 60 of them and we meet twice a year, in Prague.

“There is a lot in common, because they often talk about the effects of the visits in the prisons. Then the stories differ, depending on the structure of the family. Some would see the fathers as heroes, some didn’t, depending on what was happening in the family.”

Are there any particularly striking stories told by any of your colleagues in this group?

“I feel that each story is striking, in its own way. I think for me the greatest surprise were the stories where the daughters didn’t realise the fathers were in prison for political reasons. The grandmothers didn’t explain, the mother was either dead or also in prison, and then when the father died they didn’t even go to the funeral.

Why have you associated together as women only? Why is it daughters of the ‘50s and not sons of the ‘50s?

“I have to admit that I am always afraid of this question, because I find it hard to answer it. I did these interviews as part of my PhD dissertation at George Washington University.

“Czech society is still a patriarchal society…also women have an easier time to talk about themselves than men. Of course all this does not mean that the sons did not suffer. Maybe they suffer even more, because men – especially in Czech culture – find it more difficult to talk about themselves. So maybe if I live long enough I will interview sons.”

“It helps a lot, because it’s well known in psychology that the more you talk about your pain, the more you can hope that you will be healed.

Some might say that after around five decades maybe it’s time to move on and forget that era.

“Well, I would not say that. Because I think the most painful aspect for former victims, not just the children but all the victims, other people were victims, not only people who were imprisoned…I think the last thing they want to hear is, let’s forget it, turn a page.

“No. Because there will never be any healing done if we do not try to talk about it. Not to point fingers, because we can’t do too much about it now, what happened, all the injustice. But at least let the victims speak about it.”

To find out more about Dr Švehlová’s group, and read the testimonies of some of the women involved, go to www.enemysdaughters.com