When I asked Paul Goldsmith by phone if he knew where Czech Radio was he said, I think so, but the last time I saw it it was on fire. At just 19 he had found himself in the middle of the Soviet invasion of Czechoslovakia after deciding to visit Prague while travelling through Europe. A keen photographer, he captured those events in pictures that were soon picked up by the international media. Now, after being compiled for a book, his photos are on show at two concurrent exhibitions in Prague. When Goldsmith came to Czech Radio, we began by discussing his first day in the city, August 20, 1968. Did he get a sense that something dramatic might happen? 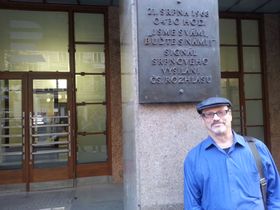 Paul Goldsmith at Czech Radio, photo: Ian Willoughby “My first impression was, of course, that this was an incredibly beautiful city. I think in 1968 it was less beautiful, in the sense that it was very drab. There certainly weren’t as many tourists as there are now.

“But I didn’t get a sense of impending doom so much as optimism, really. I stopped after walking around for a while and went to a café. I met some students from Charles University who were delighted to be able to practice their English.

“We got to strike up a conversation and they seemed very enthusiastic, and optimistic.

“It’s funny, though, because later that day I went to visit an older couple who were the parents of someone I’d met in Greece, at a hostel in Delphi.

“He’d given me their name and their address and I came by to visit and they did seem a little bit… I think they had a better understanding of the political realities and seemed very skeptical about what was going on. And very concerned.”

How did you find out that the Russians were here, that the tanks had rolled in?

“I woke up in the morning in the dorm about Hradčany Castle, at Charles University, to the sound of what I thought were bulldozers or trucks. 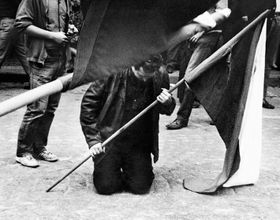 Photo: Paul Goldsmith “I went to look at the window and saw tanks wheeling onto the university, blocking the exits and just lining up in front of the dormitory.”

What was your reaction? What did you do when you realised what was going on?

“I realised that it was an invasion and I decided that I should go see what was going on and try to document it. I grabbed my camera, my rolls of film, threw them in my backpack and went down to the city.

“I went towards what appeared to be a lot of smoke and a lot of sounds of gunshots and other things that were going on. And I found myself actually by the radio station.”

What was the scene that you found here at what was then Czechoslovak Radio?

“There were fire trucks with fire ladders. There were buses that were overturned. There were tanks reeling around. Young men were riding on top of the tanks with flags furling. There was water all over the sidewalks. The radio station was on fire and there was blood on the sidewalks.”

What was the most dramatic thing that you yourself saw with your own eyes during those days? 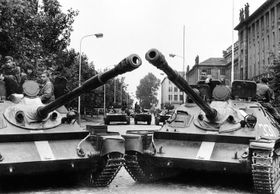 Photo: Paul Goldsmith “Other dramatic things happened that day. There were events down near Náměstí Republiky. There was a side square occupied by tanks that had wheeled in there. There was a very angry crowd yelling.

“One of the Soviet soldiers grabbed my camera to break it. When he grabbed it he got distracted, saw something else, and I grabbed back and ducked into the crowd. That was a dramatic moment.”

In your book [Prague 1968] there are photos of large groups of people sitting at the top of Wenceslas Square. When was that exactly? And what were they doing?

“There was a sit-in protest on the 22nd. I think it was basically a message of protest, of passive resistance. All during the day the day and on the 22nd as well I could see a number of people very earnestly talking to the Soviet soldiers, explaining that they weren’t wanted.

“It was clear to me that there wasn’t going to be violent resistance. This was passive resistance.”

Was it an exciting moment for you being here? Did you feel that history was in the making?

“From a photographer’s standpoint it was very exciting, partly because I wasn’t really thinking very much – just being in the moment, positioning myself to anticipate what was happening.

“But the other side of it really was very depressing. From two standpoints. From the standpoint of what was happening to Czechoslovakia it was very tragic. 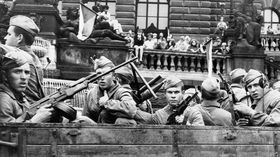 Photo: Paul Goldsmith “And from another standpoint, looking at the faces of the Soviet soldiers was a little bit tragic too, because they seemed so much caught in the middle. And so bewildered. They had Kalashnikovs and guns, but looking at their faces they seemed trapped as well, on a tragic stage.”

If I understand it right, when you left here you went straight to West Germany and sold your photos to the Associated Press?

And then they spread around the world?

“Yeah, it was quite a thrill. It was a little disconcerting because I drove out to West Germany and didn’t know where the AP office was – and found out that it was all the way in Frankfurt.

“So I had to drive my Vespa on the autobahn, essentially all night, to get there. I got there very early in the morning. Luckily it was open and they purchased five pictures out of the five rolls of film that I took.

“I got up the next day and went to Frankfurt train station and saw them on newspapers all around the world, front page. And later that week in Newsweek magazine.”

Now you have this book out, Prague 68, it was produced five or six years ago. I believe that when you were working on it a Czech man in San Francisco helped you with it and he had a direct personal connection to the events of 1968.

“Yes, it’s quite an amazing coincidence. After I worked on the photographs when I got back to the United States, as a student, I had a professor who sponsored me to do independent credit, to work on my portfolio. 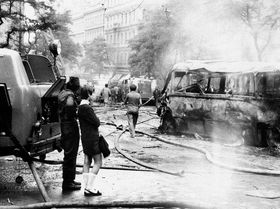 Photo: Paul Goldsmith “I produced a portfolio of photographs of Prague 1968 but I went on to study biology and then law, and pretty much put the portfolio aside.

“But about five years ago I was introduced to Jiří Barta, who is a United States citizen but is Czech and was in Prague in 1968. He was 18 and I was 19.

“He was working with me to produce the book. When I showed him the portfolio of photographs he basically said, these are wonderful, you have to let me do whatever I can to get them out in the public.

“He opened up the book and showed me a picture of himself and his brother in the crowd, on Wenceslas Square, in two photographs.

“It was quite amazing to see that he was there, that his brother was there. I asked him, what were you doing that day and how did you get there? And he explained that he and his brother and a friend of theirs from childhood came down to protest and to resist.

“He and his brother went to Wenceslas Square but their friend went to the radio station and was killed.

“It ended up giving me kind of goose bumps that to find out how immediately connected he was to the events and how tragic they were at the personal level. Which obviously was true for a lot of people in Czechoslovakia.”

You first came back here a few years ago and now you’re back for the second time – how does it feel to be in Prague today? 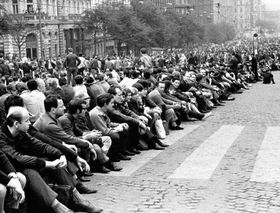 Photo: Paul Goldsmith “It’s very exciting. The first time back was a lot of fun. I was interviewed on Czech Television and met a lot of people who were interested in my photographs.

“This time is especially gratifying because I have two exhibits, one at the American Center and another one at the gallery Krásny ztráty. It’s been a thrill to have them here.

“I’m always excited to be back in Prague because it’s such a beautiful city and it’s wonderful to be able to enjoy the scenes and the sights. But it’s been very gratifying to have the pictures back in this city.”

Paul Goldsmith’s exhibition at Krásny ztráty runs until November 9 while the show at the American Center is on until October 31. Both are free of charge.