Chip Erwin is an American man who runs a factory making light aircraft in Uherske Hradiste, south Moravia. He himself is a passionate pilot and not only does he take part in competitions, he also flies home to Prague every weekend. His father was a mechanical engineer who later helped build the atomic bomb. When he came into our offices, Chip Erwin told me how his father's work helped influence his own future career.

"His engineering background was a nice environment to be raised in, because we were always building and fixing things, ice-boats and sail-boats and learning a lot of shop skills. Plus he and my mother were both pilots in the 50s and they had a small aircraft. And we all were sailors. So basically I grew up as a sailor with a little bit of exposure to aviation, and sailing and aviation have a great deal of parallels. Eventually I was able to move from racing windsurfers into flying light aircraft."

How did you go from flying aircraft to building them?

"I was selling windsurfers...I was kind of used to being in business of sports that were my passion - that made business a great deal more fun - and the ultralight movement started in the early 1980s. I started very early making a very light, single-seat tubin fabric American-style ultralight, but that lasted about two years before the market collapsed and I had to go look for a real job. Then I became a consultant. Eventually, working for a sailboard company that had an inquiry from Czechoslovakia, at that time, they had some idea to make windsurfers in Czechoslovakia with lower wages for the European market. The owners of the company didn't think much of it but it looked interesting to me, so I came over and I explored it and wrote the business plan and helped them obtain funding and eventually started that company. Which is still going now and it's doing really well. It happened to be on the other side of the border, so it's in Nove Mesto, Slovakia."

That leads me to my next question - what made you decide to come and live in this country?

"I didn't really want to be a consultant. I like to run my own businesses and I was looking for the right opportunity. When I came over here and learned about the Czech Republic and the long history and tradition of aviation, and the skills they had here, and researched the market a bit - in Europe they were buying American aircraft and shipping them over."

Was it a difficult decision to come and live and work here?

"No, it was easy. It was difficult to actually do it, but the decision itself was easy. I saw an opportunity and I went for it."

What were the particular difficulties of getting the business off the ground, so to speak?

Once you got past the Kafkaesque bureaucracy, how did you find the Czech work ethic?

"It was marginal. There are a lot of good people that have really good intent for the most part but the habits and the traditions are difficult to overcome. There's the old saying under the communist system - you pretend to pay us and we'll pretend to work. Now, some people think we're not paying them very much with an average salary of 15,000 crowns or something, but in this country now that's reasonable buying power, especially now where I am in Moravia, we're paying 20 percent higher than the average wage."

How many planes does your company, Czech Aircraft Works, produce a year?

"That's a moving target because we're growing at between 20 and 30 percent each year. This year we'll make more than 100 aircraft. Now after five years we're right about the 500, 520 aircraft sold."

Do you sell any planes here in the Czech Republic?

"It's interesting that the Czech Republic is one of the bigger producers. They probably have more producers in the ultralight field, the light aircraft field, than most other European countries but the volume isn't very high. We don't concentrate on this market like most of the other companies do. We don't even advertise here very much."

You mentioned the fact that you make ultralight planes. I know every year several people die in this country in crashes involving ultralight planes - are they really so dangerous or are the pilots at fault in those cases?

"In most of those cases it's the pilots fault. I'll tell you what: I don't drive to Moravia, if I can help it. I'm much, infinitely safer flying my light aircraft back and forth. It's a one-hour and ten-minute flight for me, compared to three hours in the car on one of the most dangerous highways in Europe. It's much more relaxing, it's quick. I don't have the pollution of the buses and trucks and the danger of passing them, and the big speed differences in the cars and the old roads. So, when you hear about one aircraft crash and somebody getting killed it's only because it doesn't happen so often. There's so many people get killed on the highway it'd fill the newspaper if it had the same publicity."

Is it the case that during the week you live in Uherske Hradiste and fly to Prague every weekend?

"I usually fly to Moravia on Sunday night so I can be at work early on Sunday morning. Then I work till Thursday evening and fly back to my home in Prague."

This may sound like a stupid question but Czech drivers are notoriously bad - are Czech pilots any better, relatively speaking?

"That's a difficult question to answer. Actually, I don't know the answer to that but, in general, most pilots are pretty safe."

I've read that you've won some cup or something in Italy for flying.

"That's a great deal of fun. It started in 1915 and in particular in the 1930s there was the Schneider Cup, which was a sea-plane race, it was an unlimited race and it really advanced the aviation industry and engineering considerably. That faded out with World War II but the Italians have brought it back, racing the European-style microlights, two-seat, 500-kilogramme gross aircraft that take off and land on water. Whether it's a flying boat or pontoons, or amphibious, it doesn't matter as long as it takes off and lands on water. We set up a triangular course with some pylons on the water. You have to take off on the water and race as fast as you can around a six-kilometre triangle, making very steep turns at 50 feet - or 20 metres - up. It's a lot of fun. I came from the water, the sailing, the windsurfing. I've been flying floats for a long time and that gives me an advantage...I've managed to win that three times now."

"I've heard there are some good places and the wind happens occasionally. I don't bother so much because I came from one of the better windsurfing spots in the world where it's always windy and there's big waves. Now I concentrate on waterskiing. This morning I was out waterskiing - that's how I get my water kicks for now."

Would you say you're here to stay in the Czech Republic?

"I'm here to stay at least another five years, and I think my company will be permanent. I think I'll be always coming back but I expect that I'll delegating more and training more Czech managers, as I'm doing now. Sometimes I'm gone for nearly a month with some of the travels I have to take. My managers are coming along quite well, but then the company grows 30 percent a year and it's really difficult to keep up with all that. But I expect they'll gradually step in and I can spend more time doing even more marketing, and bringing more sales."

Do you have a family here?

To a Czech woman? 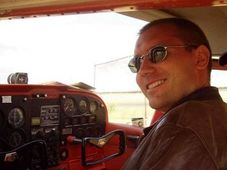 This week in Panorama – Rob Cameron takes to the skies for a flight over North Bohemia in a Cessna 150 light aeroplane, skilfully…

One pilot, aged 50, was killed and another injured when their ultralight planes collided in the area of Olomouc on Saturday evening.…