The new documentary Toman Brod: Praha – Terezín – Birkenau – Märzbachtal – Praha is the portrait of a Holocaust survivor who is today in his mid 80s. But what’s different about this feature-length film is that it was made by a schoolboy. Indeed, director Matouš Bičák was only 15 when he and his classmates – inspired by a school project – set off with Toman Brod to record his remarkable stories of survival in Nazi concentration camps. 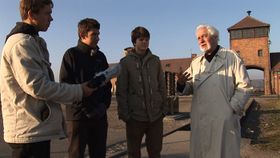 Shooting of 'Toman Brod: Praha – Terezín – Birkenau – Märzbachtal – Praha', photo: Matofilm When Bičák came in to Radio Prague, I asked the young filmmaker, now 19, if he’d had any prior experience.

“Yes. Mostly from school trips. After that I made three documentary films. They were shorter. The film about Toman Brod has been my biggest project.”

Tell us about the idea behind the film. You and your schoolmates went with him to places where he had experienced these terrible things?

“Yes. I know many historical films about the second world war and I wanted to make my film different, meaning the older generation with the younger generation.

“It’s interesting because our age was Toman Brod’s was when he was in these places.”

So could you imagine yourself being in the same situations as him back in the early and mid-1940s?

“Yes. We heard many unbelievable stories from his life. Most of them were amazing.”

You had some experience before you made the film but still you were very young. Did you learn a lot as you made it? 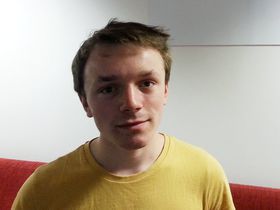 When you were doing the post-production, did you see things that you would have done differently now?

“When I started I was younger. And it’s interesting to find mistakes in the film, because I know I could do it better tomorrow.”

What do you think you is the main thing that you and your schoolmates got from travelling with Mr. Brod and shooting this film?

“I think when you watch the film, you can’t see any emotion. Because Toman Brod’s voice is so sober. You can only find emotions under his speech. But it’s interesting, because at the end of the film you can hear Toman Brod’s emotions in the upper part of his voice.”

So you think there’s still a danger of something like that happening again?

“Yes. For example, gypsies today, or North Korea – it is the same.” 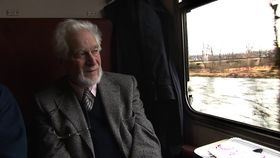 'Toman Brod: Praha – Terezín – Birkenau – Märzbachtal – Praha', photo: Matofilm In the film Toman Brod tells many powerful, incredible stories. Were there any particular stories of his that made an impact on you?

“When we started editing the film there were different interesting parts of the film than when I was at the end of the editing. For example, the story about ping pong…”

You mean when he plays ping pong with some Nazi officer?

“Yes. At the end of the editing process this story was very interesting to me.”

Also the film is quite long. Was it hard to edit him, given that everything he says is interesting?

Perhaps you can’t answer this question, but what do you think he got from the experience of travelling with you young people to places where he hadn’t been for 70 years?

Regardless of the fact that he was with you, it must have been a strange and difficult thing for him to go back to these places where he hadn’t been for 70 years? 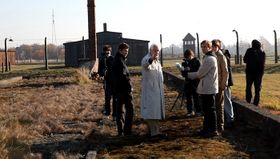 Shooting of 'Toman Brod: Praha – Terezín – Birkenau – Märzbachtal – Praha', photo: Matofilm “Yes. Many of the places we visited together it was the first time for him. For example when we went with him to one lager, there was – I don’t know how to describe it – a really amazing atmosphere. I think it’s not possible to describe it.”

Also he must have been a great discovery for you as a subject. He’s in his 80s but he looks great, he speaks really well, he’s energetic.

“When we first met him he was very austere. But when we were at the end of the process, we were friends. It was different.”

“Yes. We would like to speak together in future.”

What’s the future of the film? I know you had a premiere recently in Prague but what are your other plans for the documentary?

“The unofficial premiere was a month ago. And now we’d like to show it at festivals. We don’t have much experience with these things, but we have to learn it. I will have some meetings about the film and I’ll see what I can do with it.”

Given that it started as a school project, would you like it to be screened at schools in the Czech Republic?

“Thanks to the duration of the film...”

Which is nearly two hours long. 'Toman Brod: Praha – Terezín – Birkenau – Märzbachtal – Praha', photo: Matofilm “Yes…it’s not possible to show it in schools. Maybe we can show it at festivals. On DVD. But for example we’re doing another project involving small stories of Holocaust survivors that is for schools.”

What about your own future Matouš – is this the first of many documentaries from you?

“Yes. I would like to study film science at university. I hope it will be possible next year. Because this year I was in third place under the cut-off line. I’ll see.”