My guest today is Bill Cohn, a New York born lawyer, constitutional law professor and teacher. Bill has lived in the Czech Republic for a number of years, dividing his time between teaching media and ethics at the University of New York in Prague, writing for publications such as the Prague Post and working as a legal consultant.

You are a media and ethics professor and a constitutional law scholar – what exactly does that mean?

“I am trained as a lawyer; I worked as a lawyer in San Francisco, California for a decade. I came here, or actually I returned here – I was first in the Czech Republic, which was then Czechoslovakia in 1990 and planted the seeds fro my return, which happened in 2002. I’ve been here about six years writing, advising and teaching about law and law related matters. And it is a labour of love. We get into a lot of interesting issues at the university where I teach, and the students are fabulous.”

So tell me what it is like when you compare Czech students with American students – what are your experiences working with young Czechs?

“Well, I ask them if they have any relevant experience and they never want to say anything. And I say ‘You know the difference between you guys is that American students think that they are experts on everything.’ – If their mothers’ breast fed them, they think it makes them an expert on early childhood nutrition. Where as these Czech and Slovak students actually have a great deal of relevant experience, but they tend to downplay it significantly – they don’t think it is worth anything. So to the extent that they can amplify their relevant experience, I think it behoves them in this age when people need to market themselves, frankly. Because they do have fabulous language skills, fabulous educational and work experience, and it is great to get them out of their shells and make them realise their potential and work with them.”

And I guess possibly part of this shell that you mentioned may be related to the communist past in this country in which the media and the concept of ethics was perhaps not taken that seriously by the former regime and that had an effect on a generation. So when you are teaching young Czechs, is that something that you are aware of – the new perceptions that are now coming in?

“Yes. The critical thinking class – what we focus on is asking the right questions, questioning assumptions, questioning arguments that are made…Definitely there is a tendency, given the history of education in Czechoslovakia and Eastern Europe for students to be accustomed to rote learning. That means that their instructors throw at them information, which they swallow and then spit back out. What we try to do is break that down – I should mention that the university where I teach is the University of New York in Prague, Prague 2, and I have been there for six years. We have a lot of things that we do in order to have our students realise their true potential. So the challenge is to break through the tendency to just accept and not question the information and analysis that they are given, and also in terms of helping them to be active participants in their own learning. The greatest challenge I have is I ask students to find a related topic to the subject matter to investigate on their own. And they drag their feet because they want me to give them something, and I’m like ‘No, you need to do some research and think about what we’ve done here and find something that you are genuinely interested in.’ And that is like pulling teeth sometimes. But it is an essential part of empowering these kids to realise their potential, which is to think independently.”

And from a wider perspective, what do you think that the state of media and ethics and some of these other issues that you deal with are in the Czech Republic?

“Well, when it comes to law and ethics, obviously the problem here is corruption. There is passivity, there is a resignation to the fact that this is just the way it is and we’ll never be able to change it. But I see amongst the leaders in our student body, a burning desire to change that. So I do have hope that the kids are going to lead to a better day. I see their excitement and optimism in a lot of areas and one of the great problems they are going to need to tackle is corruption. Another great problem that they are going to need to tackle is climate change – global warming. They are aware of these issues and we try to integrate it into their learning, because they recognise that they need to do better than their parent’s generation did.”

Working with these young Czechs, what have their perceptions of Americans been? Have they been somewhat coloured or prejudiced by the current state, shall we say, of America under the Bush Administration and the image problem that America has certainly faced in the last few years?

“Certainly, but enough of them have spent time in the states. You know, these kids are very mobile, they are part of globalisation, and they have been exchange students over there. And I should mention in terms of the international element – our university has students from around seventy different countries. The largest constituency is Czechs, followed by Slovaks, likely followed by Russians and students from the states that formerly constituted Yugoslavia: Croatia, Macedonia and Serbia. I’ve had students all the way from A-Z: Afghanistan to Zimbabwe in my class. We have lots of American and Canadian students too, so it is very international. I mention that in the sense that the students have a lot of international experience, having lived and worked in other places, and I think that they recognise that the people of a country aren’t always closely associated with their government; that the people can be good, and people are good, even though the government may do things that are seen as bad and not in the interests of the people affected by their actions. So that is part of their empowerment and critical analysis that they are developing and life experience helps them to get there.”

Can you describe what it is like for a foreigner or English speaker to live in Prague and the various small, international English-speaking communities here trying to make a difference, letting your voices be heard?

“It is nice to be able to have outlets like the Prague Post and I also write for various on-line publications – particularly because I write about the things that I teach about so it lets me share my writing with my students and integrate theory and practice. My feelings about teaching are that if I am not actively interested and engaged in the topics I’m teaching about, then why should the students be interested in them? So, my writing helps to keep me honest in terms of raising questions and thinking about cutting-edge issues including missile defence and the radar base here.”

The radar base is obviously a big issue here. How do you personally view the way that it has played out?

“Associate Justice Louis Brandeis of the US Supreme Court said that sunlight is the best disinfectant, meaning that when things are exposed to the light of day and public scrutiny, there is a more honest process and better outcomes. And in this case, everything was held closely under wraps, and the public wasn’t really involved in having a say in this until it was essentially a done deal. So that is my sense about it, that it was too much of a closed process.”

Final question, you are a New Yorker, you grew up there and now you live in Prague, what are your insights on the pros and cons of living in the two cities?

“I love them each in their own way. I miss the cuisine of New York, I miss the things that I am culturally familiar with, but you know as the French say ‘Vive la differénce!’ It is the fact that we can be here and experience things that are different that make us appreciate both where we come from and the fact that other places are different. Czechs hold their cards close to the vest - they don’t make eye-contact with you, they don’t smile at you, but if you can break through that and get to know them, they are really just a bunch of big soft teddy bears underneath it.”

Bill Cohn, thank you very much for joining us.

“A pleasure. Thank you.”

On Wednesday evening, the lower house of the Czech parliament formally ratified a law which means that the country now recognizes… 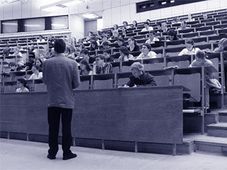 In this edition of Panorama we meet some of those teaching and studying Czech at two of New York’s most prestigious universities.…

US students enjoy the experience of studying in Prague